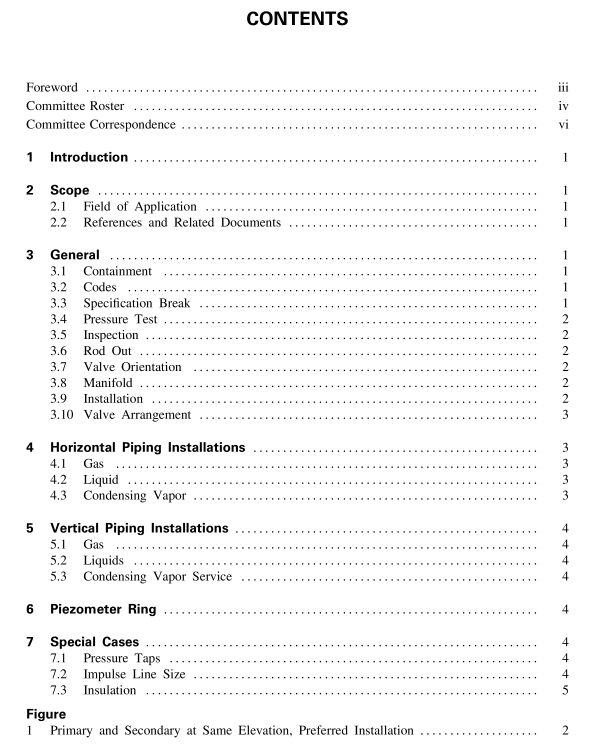 ASME MFC-8M pdf download FLUID FLOW IN CLOSED CONDUITS: CONNECTIONS FOR PRESSURE SIGNAL TRANSMISSIONS BETWEEN PRIMARY AND SECONDARY DEVICES
5 VERTICAL PIPING INSTALLATIONS 5.1 Gas In non–condensing service (see para. 4.1), the con- necting lines from the primary shall slope upward as described for gas service in horizontal lines above (see Fig. C3).
5.2 Liquids See the description for liquid service in horizontal lines in para. 4.2. If the temperatures inside the pipe and in the impulse lines differ by no more than about 20°C (68°F), the difference in density over the small height difference between the pressure taps should have only a small effect (see Fig. C3).
5.3 Condensing Vapor Service There are two choices for impulse line design for flow in a vertical line in vapor service.
(a) Equal impulse tubing height installation. The lower impulse line is formed upward before turning horizontal and then down to the secondary. This provides an equal head of liquid in both vertical impulse lines. In this case, there is no need for special calibration (See Fig. C5).
(b) Calibration compensated installation. The two impulse lines leave the pipe horizontally, then turn down to the secondary device. The zero of the secondary device must be adjusted to account for the difference in the heights of the two impulse lines and the contained liquid (see Nonmandatory Appendix B).
6 PIEZOMETER RING A piezometer ring may be used to physically average the pressures from the several pressure taps in the plane of the primary device. There may be a need to periodically vent or drain the ring (See Fig. C6).
The considerations described in sections 4 and 5 also apply to piezometer installations.
7 SPECIAL CASES Any installation which differs from the above guide- lines will require careful design and attention to details to avoid errors. As an example, it is possible to install a primary element in a buried liquid line with the secondary above it, if any accumulated gases are removed from the impulse lines before they accumulate enough to depress the liquid level in the impulse lines 4 (See Fig. C7). Primary elements in gas service with the secondary mounted below the primary will require provision for accumulation and removal ofliquids before the liquids rise above the secondary device pressure taps (See Fig. C8).
For condensing vapors with the secondary above the primary, see Fig. C9. A clean fluid can be used to purge the system to keep dirt out or to ensure the contents of the system (See Fig. C10). Pre-filled physical barrier diaphragm seals called remote seals or chemical seals are used in certain applications. Deflection of the diaphragm requires some small force that must be considered in the calibration process. Errors are reduced with larger diaphragms and good design. It is recommended that the impulse lines or capillary tubes to remote seals be of identical length and be arranged to reduce the exposure to different temperatures. Maintenance of special systems may be labor inten- sive and require care and knowledge. The recommended installations require less maintenance to continue accu- rate measurement. 7.1 Pressure Taps The pressure taps must accurately sense the pressure of interest (see MFC-3M).
The holes through the pipe wall, or through orifice flanges must be smooth and have no protruding internal burrs resulting from drilling or welding. Pressure tap connections shall be at right angles to the centerline of the pipe. The hole bored through the pipe wall is to be no larger than required to avoid plugging. Industry practice is to accept the boring provided in standard orifice flanges. Typical values are 1 ⁄ 4 in. for pipes 1 1 ⁄ 2 in. and smaller; 3 ⁄ 8 in. for 2 in. pipe; and 1 ⁄ 2 in. for pipes 3 in. and larger.
Research laboratories and aerospace applications with very clean fluids prefer smaller holes because larger holes may interfere with fluid flow near the pipe wall. In very dirty services, flush diaphragm seals have been used. To ensure measurement sensitivity, diaphragms are typically a nominal 80 mm or 100 mm (3 in. or 4 in.) in diameter. 7.2 Impulse Line Size The required diameter of the impulse line depends on the service conditions. Lines smaller than 6 mm ( 1 ⁄ 4 in.) will not easily allow gas bubbles to flow up and out of a liquid system, nor allow liquid drops to flow down. In smaller sizes and with liquids, capillary effects may become significant.