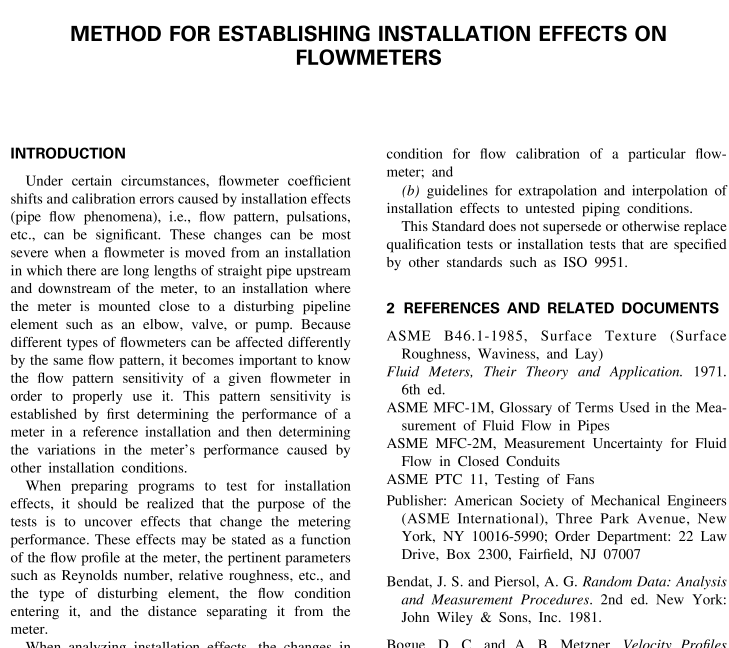 ASME MFC-10M pdf download METHOD FOR ESTABLISHING INSTALLATION EFFECTS ON FLOWMETERS
(c) The tests outlined in this Standard should cover the pertinent range of fluid flow rates, Reynolds num- bers, etc., of the meter to be evaluated. NOTE: This requirement can be satisfied by stating the range of pertinent nondimensionalized parameters over which the data were obtained (see Section 7).
(d) To avoid missing periodic spatial flow variations, measurements should be made at pipe lengths that are not integer multiples of each other.
(e) All calibrations should be performed at the same flow conditions or as close as practical to the same conditions when comparing different test runs. When reducing data, corrections can be made via an indepen- dent parameter such as Reynolds number when it can be shown that the overall effects of the different fluid conditions (temperature, pressure, etc.) and/or the fluid properties (density, viscosity, etc.) on the tested flow- meter size and type are known and have been ac- counted for.
(f) All raw calibration data should be recorded and retained.
5 STANDARD REFERENCE CONDITIONS
5.1 Description The process of establishing installation effects in- volves the comparison of the performance to that ob- tained in a standard reference condition. This document allows for two standard reference conditions. One is based on having specific, well-defined flow patterns in the test installation (Basic Reference Condition), and the other is based on the constancy of flowmeter performance along the pipe (Working Reference Con- dition).
5.1.1 Basic Reference Condition. The Basic Ref- erence Condition exists when the fluid velocity pattern at the flowmeter is identical to that which would exist if the meter were installed in a conduit running full and steady with unlimited lengths of straight upstream and downstream pipe. Such a flow pattern is character- ized by zero time-averaged radial and azimuthal fluid velocity components and an axisymmetric axial velocity profile that is independent of axial position. These components can be considered to be zero if their average values are zero to within the measurement uncertainty or if they are negligible to within 0.01% of the average 3 flow velocity. The exact axial velocity profile depends on the inner wall roughness of the pipe (see ASME B46.1-1985) and the Reynolds number of the flow. The above flow pattern which defines the Basic Reference Condition is often described as one which is steady, free from swirl, and having a fully-developed axial velocity profile.
5.1.2 Working Reference Condition. From a practical standpoint, the achievement and/or verification of Basic Reference Conditions may be limited by the test flow facility and/or instrumentation. When such limitations exist, a working reference should be estab- lished. The method for establishing the existence of this reference condition is markedly different from that for the Basic Reference Condition. Here flowmeter performance rather than a specific flow pattern is used as the criterion. Specifically, the Working Reference Condition is achieved when the flowmeter performance is independent of orientation and axial location of the flowmeter along the pipe. NOTE: Ideally, the flowmeter performance achieved under the Work- ing Reference Condition will not differ from that which would be observed if the flowmeter were installed in a Basic Reference Condition.
This is so even though the flow patterns present in the working reference condition may in some cases differ from those in the Basic Reference Condition. The explanation for this lies in the fact that different flowmeters have different sensitivities to flow patterns. As a consequence of this differing sensitivity, the lengths of straight upstream and downstream piping required to achieve the Working Reference Condition will depend on the type of flowmeter being tested, as well as the test installation. A flowmeter that is fairly insensitive to flow pattern will require only short straight lengths of adjacent piping.
5.2 Experimental Methods for Establishing Standard Reference Conditions There are two ways to establish reference conditions in this Standard. They are described in the following subparagraphs. The first of these is more fundamental while the second is more practical and perhaps easier to accomplish in most circumstances.
5.2.1 Establishing a Basic Reference Condi- tion.