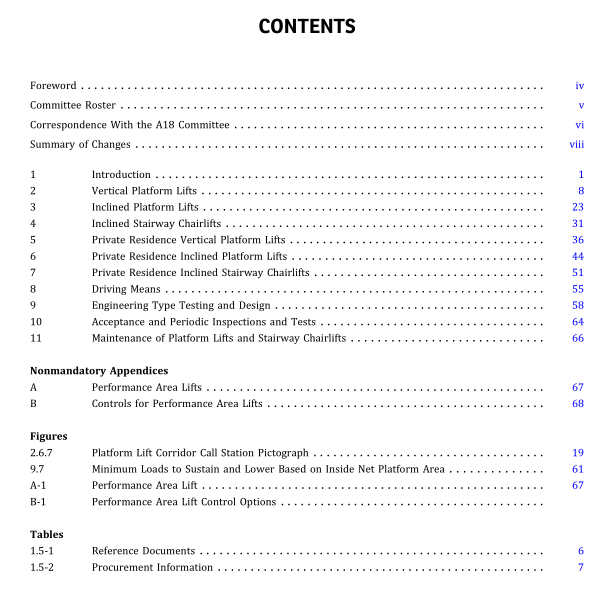 ASME A18.1 pdf download Safety Standard for Platform Lifts and Stairway Chairlifts
pit: that portion of a runway extending from the sill level ofthe lowest landing to the floor at the bottom of the runway.platform: the load-carrying unit, including, but not limitedto frame, floor,enclosure, seat, and door or gate.
platform frame: a structural frame composed of intercon-necting members that supports the platform.
plunger (ram): a long cylindrical compression memberthat is directly or indirectly coupled to the platformframe.This member is not provided with a sealingmeans. Where used in assembly with a cylinder, thesealing means is provided on the cylinder head; in thecase of telescopic plungers and cylinders, a sealingmeans may be used in the moving plunger that is alsoa cylinder.
portable equipment: a device that is used to transportthose with mobility impairments, that is not permanentlyfastened in place, and is not a relocatable lift.
position indicator: a device that indicates the position ofthe platform in the runway. lt is called a “hall positionindicator” when placed at a landing, or a “platform posi-tion indicator” when placed in the platform.
private residence: a separate dwelling or a separate apart-ment in a multiple dwelling that is occupied only by themembers of a single family unit.
rated load: the load that the equipment is designed andinstalled to lift at the rated speed.
rated load performance: the operation of the equipmentwith its rated load at rated speed.
rated speed: the speed at which the equipment is designedto operate in the up direction with rated load in the plat-form.
recycling operation, telescopic plunger: an operation forrestoring the relative vertical positions of the multipleplungers in a telescoping plunger arrangement.
releasing carrier, governor rope: a mechanical device towhich the governor rope may be fastened and calibratedto control the activation of a safety at a predeterminedtripping force.
relocatable lift: a vertical or inclined platform lift,asdefined by this Standard, that is designed to be movedfrom one location to another and is not designed to bepermanently fastened in place.
repair: the process of rehabilitation or replacement ofparts that are basically the same as the original for thepurpose of ensuring performance in accordance withthe applicable Standard requirements.
replacement: the substitution of a device or component inits entirety with a new unit that is basically the same as theoriginal for the purpose of ensuring performance in accor-dance with applicable Standard requirements.
rise: see travel.
rope, compensating: wire rope used to counterbalance, orpartially counterbalance, the weight of the suspensionropes.
rope, counterweight: wire rope used to raise and lower thecounterweight on equipment having a winding drummachine or a hydraulic machine equipped with a counter-weight.
rope.governor: wire rope with at least one end fastened tothe safety activating means or governor rope releasingcarrier, passing over and driving the governor sheave.and providing continuous information on the speedand direction of the platform or counterweight.
rope, suspension (hoisting): wire rope used to raise andlower a platform lift or its counterweight, or a stairwaychairlift, or both.
rope equalizer,suspension: a device installed on a platformor counterweightto equalize automatically the tensions inthe suspension wire ropes.
rope-fastening device, auxiliary: a device attached to theplatform or counterweight or to the overhead dead-end rope-hitch support that will function automaticallyto support the platform or counterweight in case theregular wire-rope fastening fails at the point of connectionto the platform or counterweight or at the overhead dead-end hitch.
runby, top, direct-plunger hydraulic: the distance the plat-form can run above its top terminal landing before theplunger strikes its mechanical stop.
runway: the space in which the platform or seat moves.runway door or gate, locking device: a device that secures arunway door or gate in the closed position and prevents itfrom being opened from the landing side except undercertain specified conditions.
safety bulkhead: a closure at the bottom of the cylinderlocated above the cylinder head and provided with anorifice for controlling the loss of fluid in the event of cyl-inder head failure.
safety, platform or counterweight: a mechanical deviceattached to the platform frame or to an auxiliaryframe, or to the counterweight frame, to stop and holdthe platform or counterweight under one or more ofthe following conditions: predetermined overspeed,free fall, or if the suspension ropes slacken. 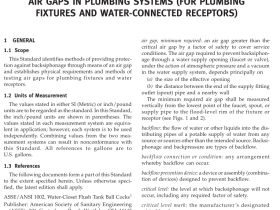