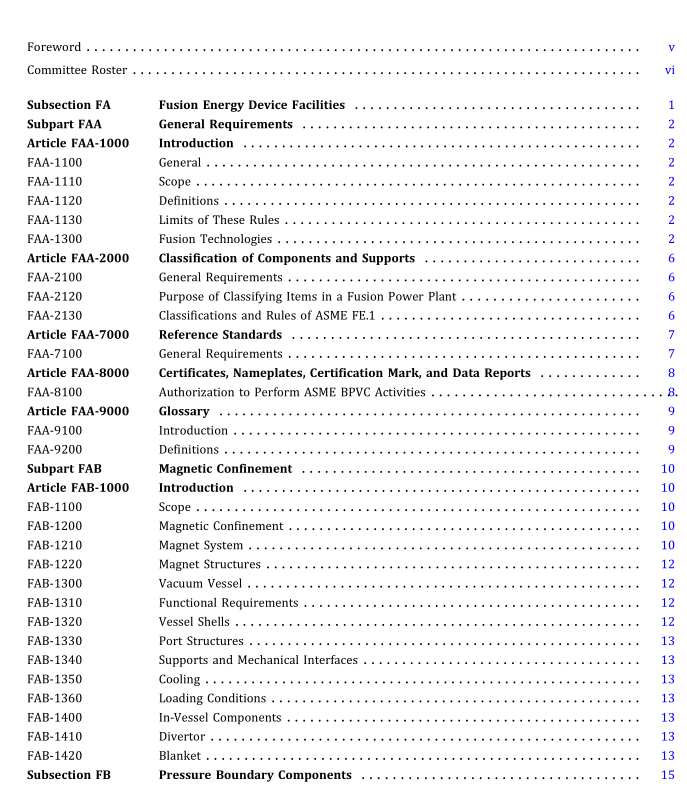 ASME FE.1 pdf download Rules for Construction of Fusion Energy Devices
FAA-1100 GENERAL
FAA-1110 Scope
The rules ofSubsection FA, Subpart FAA constitute the general requirements associated with fusion components used in the construction of fusion devices and their supporting systems. Only those fusion components that are serving a pressure boundary and/or structural integ- rity function (see FAA-2120) are covered by these rules. Items that are specifically excluded are electrical compo- nents and superconducting strand. It is understood that these rules were developed to document rules for construction that are not adequately addressed within existing Divisions of Section III of the ASME Boiler and Pressure Vessel Code (BPVC) or other existing codes and standards used in the nuclear industry.
(a) The General Requirements of ASME FE.1 are provided in ASME BPVC, Section III, Subsection NCA, except for those paragraphs or subparagraphs (with numberedheaders) replacedbycorrespondingnumbered FAA paragraphs or subparagraphs or new numbered FAA paragraphs or subparagraphs.
(b) ASME BPVC, SectionIII, Division1 terminologymay differ from that in ASME FE.1 (e.g., Class 1 and Class 2 versus Class A and Class B), but the application and useofthese rules are identical forASME FE.1 construction except where otherwise noted.
(c) References to Appendices are to each respective Subsectionofthis DraftStandard, unless otherwise stated. FAA-1120 Definitions Definitions ofkey terms specific to this Draft Standard are included in Article FAA-9000 or noted within the applicable text.
The definitions in Article FAA-9000 shall prevail should a conflict exist with definitions found in ASME BPVC, Section III, Subsection NCA or in other documents referenced in this Draft Standard. UnlessatermisdefinedinArticleFAA-9000,thedefinition in ASME BPVC, Section III, Subsection NCA, Article NCA- 9000 shall apply. FAA-1130 Limits of These Rules The rules ofthis Draft Standard for fusion components provide requirements for new construction and include consideration of mechanical and thermal stresses due to cyclic operation and high-temperature creep. These rules address the thermal and radiation effects on mate- rials produced during the fusion activity. The rules do not coverdeterioration thatmayoccurin service as a resultof corrosion, erosion, thermal embrittlement, or instability ofmaterial.Theseeffectsshallbetakenintoaccountwitha view to realizing the design or the specified life of the components and support identified.
The rules are not intended to be applicable to valve operators, controllers, position indicators, pump impel- lers, pump drivers, or other accessories and devices, unless they are pressure-retaining parts or act as support structures or supports. If such items are in a support load path, the provisions of FAA-1100 apply. The rules ofthis Draft Standard do not apply to instru- ments, or permanently sealed fluid-filled tubing systems furnished with instruments, but they do apply to instru- ment, control, and sampling piping when specified in a Design Specification. FAA-1300 FUSION TECHNOLOGIES Subsection FA provides the rules for construction of nuclear fusion devices and their supporting systems. Nuclear fusion and nuclear fission are two different types of energy-releasing reactions in which energy is released from high-powered atomic bonds between the particles within a nucleus.
The main difference between these two processes is thatfission is the splitting ofan atom into two or more smaller ones, whereas fusion isthefusingoftwoormoresmalleratomsintoalargerone. Nuclearfissionis atechnologythathas beeninusesince the 1950s. Figure FAA-1300-1 illustrates a typical light water fission system. There is potential for new develop- ments in nuclear energy technology to enhance nuclear energy’s role in a sustainable-energy future.
Nuclear fusion is a process in which lightnuclei, usually deuterium and tritium, collide and join together to form a heavier nucleus. When this happens, a considerable amount of energy is released. To overcome the electro- static repulsion of these light nuclei so they will collide and fuse, extreme energy is imparted to the nuclei by radio-frequency heating, ohmic heating, neutral beam heating, or other means.
These high-energy nuclei are called plasma ions. These plasma ions are confined by magnetic fields in a tokamak system so their velocity energy allows them to collide. Figure FAA-1300-2 illus- trates a theoretical magnetic confinement-based fusion system. Another fusion system is to freeze deuterium and tritium atoms into small pellets, and then heat and compress the frozen pellets with lasers or X-rays so that the inertia of the pellet mass allows atom collisions and fusion. Deuterium fuel is abundant in water, and tritium can be bred from lithium.