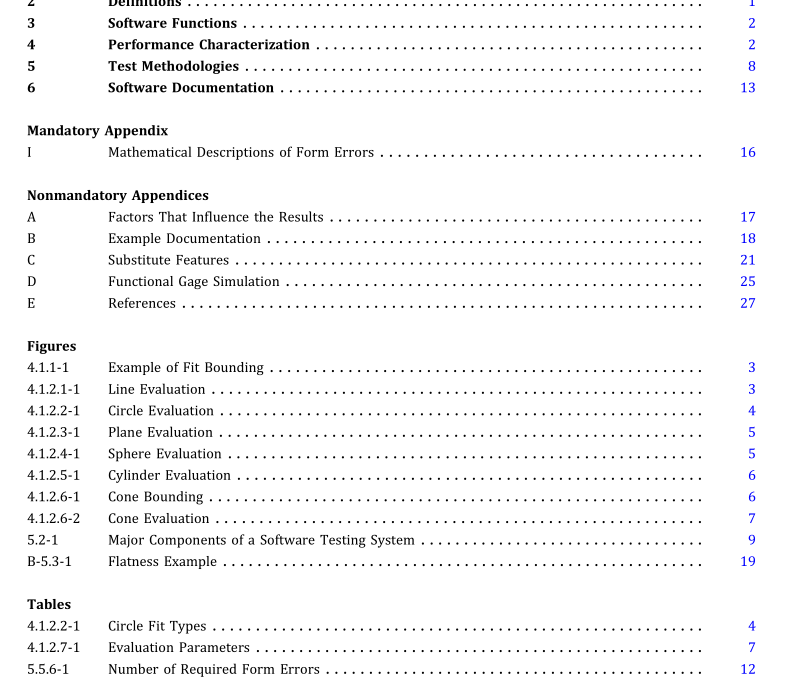 ASME B89.4.10 pdf download MethodsforPerformance Evaluation of Coordinate Measuring System Software
coordinate measuring system (CMS): any piece ofequipment that collects coordinates (points), calculates, and displays additional information using the measured points. datum: a theoretically exact point, line, or plane derived from a feature on a part. See ASME Y14.5M-2018. least-squares fit feature: a feature ofperfect form, corresponding to a set ofdata points, that minimizes the sum of the squared deviations between the feature and the individual data points. (Reference Nonmandatory Appendix C for addi- tional information.) This term is elsewhere sometimes referred to as the Gaussian associated feature. NOTE: In this Standard, unless otherwise indicated, the least-squares fitis understoodto be notweighted, i.e., each pointis given equal weight in the least-squares objective function, even if the points in the test data are not exactly evenly spaced. objective function: a function which is to be optimized by searching for a minimum (or maximum) as its parameters are varied.Adifferentobjectivefunctionisusedforeachtypeoffit,e.g.,aleast-squaresversusminimum-circumscribedcircle. reference evaluation: the evaluation of the substitute feature using a known implementation of an algorithm. reference feature: a substitute feature used as the basis for evaluating a test feature. substitutefeature: afeature ofperfectgeometricformthatcorresponds to asetofdata points andis intendedto minimize an objective function. test: a basic unit of evaluation, based on one or more related data sets, which are applied to one or more software implementations of an algorithm. test feature: a substitute feature computed by the software under test. 3 ð21Þ SOFTWARE FUNCTIONS In normal usage, CMS hardware is used to collectdata points (raw data) on the surfaces ofparts being inspected. CMS softwarecanprocess theserawdatato constructdatums, partcoordinate systems, and substitute features thatrepresent the surfaces being inspected. From these constructions, the CMS software can evaluate such characteristics as size, location, orientation, and form. 3.1 Input Data Rawdata to be used to testand analyze CMS software maybe obtained byphysicallyinspectinga testworkpiece or by mathematicalcomputation. Theformerrepresents atestoftheentiremeasuringsystem,whilethelatterapproachavoids operator, workpiece, environment, and machine influences.
The latter approach also makes it possible to more closely control the raw data sets, including limits on their spatial distribution, as well as inclusion of artificially induced form errors. For software analysis, the latter approach is the most universally accepted and the most reliable. This is the approach addressed herein. 3.2 Data Analysis The raw data points are processed by mathematical algorithms with the purpose to calculate perfect-form substitute features. First, substitute features are calculated to represent the original data. Then the substitute features are used to evaluate conformance to tolerances or to determine other geometric characteristics ofthe workpiece.
An alternative to the use of substitute features is the use of Functional Gage Simulation, described in Nonmandatory Appendix D. Differentmethods canbeusedforobtainingsubstitutefeatures. Thesemethodsmayhavedifferentobjectivefunctions, i.e., different criteria for deciding that a particular substitute feature is better or worse than other possible substitute features. Different criteria can, in general, lead to different results. The proper selection of fitting criterion and data analysis method is outside the scope ofthis Standard. Fitcriteria are usuallybased on L P -norm estimation, or minimum- circumscribed, or maximum-inscribed methods. Refer to Nonmandatory Appendix C for explanations ofthese methods. The objective ofthis Standard is notto decree thatanyone methodis betterthan anyother. Guidance is providedto the user for checking whether particular CMS software produces results that agree sufficiently closely with the reference results within the context of the design requirements.
4 PERFORMANCE CHARACTERIZATION This sectionestablishes thecharacteristics bywhichCMS software performanceis evaluated. These characteristics are discussed in terms offourcategories: quality, robustness, reliability, and ease ofuse. Characteristics thatare notused for performance evaluation in this Standard are discussed at the end of this section.
4.1 Evaluation of Quality Inthis Standard, the qualityofthealgorithmis evaluatedonthebasis ofthegeometricdeviationofthetestfeaturefrom a reference feature.
4.1.1 EvaluationConcept. Somefeatureshaveunboundedgeometry,e.g.,lineshaveinfinitelength.Forthepurposesof evaluation, unbounded features are bounded by their sample point sets. The resultant bounded test feature is then compared to the reference feature. Evaluation parameters are defined for each type of feature (see Figure 4.1.1-1).
4.1.2 EvaluationParameters.Eachfeaturetypehasauniquesetofevaluationparameters.Testresultsarereportedas outlined below. The figures in this section have the following annotation conventions: