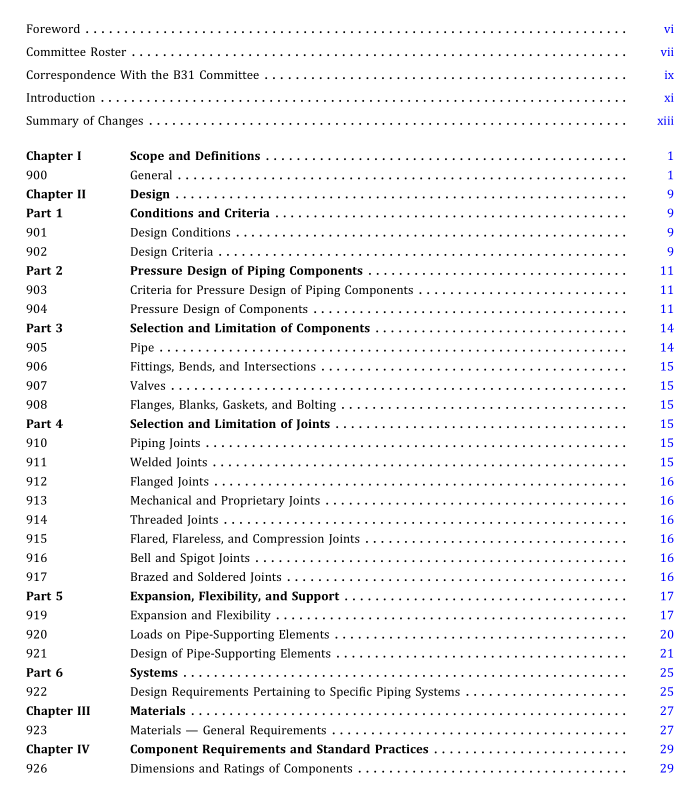 ASME B31.9 pdf download Building Services Piping ASME Code for Pressure Piping, B31
900.1.3 Exclusions. This Code does not apply to econ-omizers,heaters, pumps, tanks, heat exchangers, andequipment covered by the ASME Boiler and Pressurevessel Code (BPVC).
900.1.4 Units of Measure. This Code states values inboth Usc and sl units. Within the text, the Sl units areshown in parentheses. The values stated in eachsystem are not exact equivalents; therefore, eachsystem of units should be used independently of the other.when separate equations are provided for UsC and sunits, those equations shall be executed using variables inthe units associated with the specific equation.The resultsobtained from execution of these equations may beconverted to other units.
when necessary to convert from one system of units toanother, conversion should be made by rounding thevalues to the number of significant digits of implied preci-sion in the starting value, but not less than four significantdigits for use in calculations.
900.2 Terms and Definitions
adhesive bond: a union of materials by means of an adhe-sive.
anchor: a structural attachment device or mechanism thatprevents the movement of pipe due to thermal expansion,expansion joint thrust, and other loads.
arc welding: a group of welding processes that producecoalescence of metals by heating them with an arc,with or without the use of filler metal.
assembly: the joining together of two or more pipingcomponents.
automatic welding: welding with equipment that performsthe welding operation without constant observation andadjustment of controls by a welding operator. The equip-ment may or may not perform the loading and unloadingof the work.
backing: material placed at the root of a weld joint tosupport molten weld metal.
backing ring: backing in the form of a ring.
ball or swivel joint: a joint that permits pipe motion bymeans of rotation.
base metal (material): the metal (material) to be welded,brazed, soldered, or cut.
boiler external piping (BEP): see para. 900.1.2(b).
branch connection: the attachment of the end of a branchpipe to the run of a main pipe, with or without the use of afitting. Figure 927.4.6-1 shows typical branch connectionsthat do not use fittings.
braze welding: ajoining process that produces coalescenceof metals by using a filler metal whose liquidus is above800F [427°C) and below the solidus of the base metals.Unlike brazing, the filler metal is not distributed in thejoint by capillary attraction.
brazing: a joining process that produces coalescence ofmetals by heating to a suitable temperature and byusing a filler metal whose liquidus is above 800°F(427°C) and below the solidus of the base metals. Thefiller metal is distributed by capillary attractionbetween closely fitted joint surfaces.
brine: a liquid used for the transmission of heat withoutchange of state in cooling systems, which is nonflammableor has a flash point above 150°F (66°C) as determined bythe method of ASTM D93.
brittle failure: a pipe failure mode that exhibits no materialdeformation visible to the naked eye,e.g., stretching, elon-gation, or necking down, in the area of the break.
butt joint: a joint between two members aligned approxi-mately in the same plane.
chilled water: water or an antifreeze solution used as abrine at a supply temperature below 60°F(16°C].
coalescence: the growing together or growth into one bodyof materials being welded, brazed, or soldered.
combustible liquid: a liquid having a flash point at or above100°F (38°C).
consumable insert: backing in the form of filler metal that ismelted into the root of the weld and fused with the basemetals.
contractor: the entity responsible for fabrication andinstallation of piping and associated equipment.
crack: a fracture-type imperfection characterized by asharp tip and high ratio of length and depth toopening displacement.
DN: metric designated pipe size.The number is the milli-meter approximation of the inch pipe size using 1 in.equalto 25 mm.The pipe is still manufactured in inch sizes.defect: an imperfection that by nature or accumulatedeffect renders a part of the piping unable to meetminimum applicable acceptance standards or specifica-tions. A defect is cause for rejection.
deposited metal: filler metal that has been added during awelding operation.