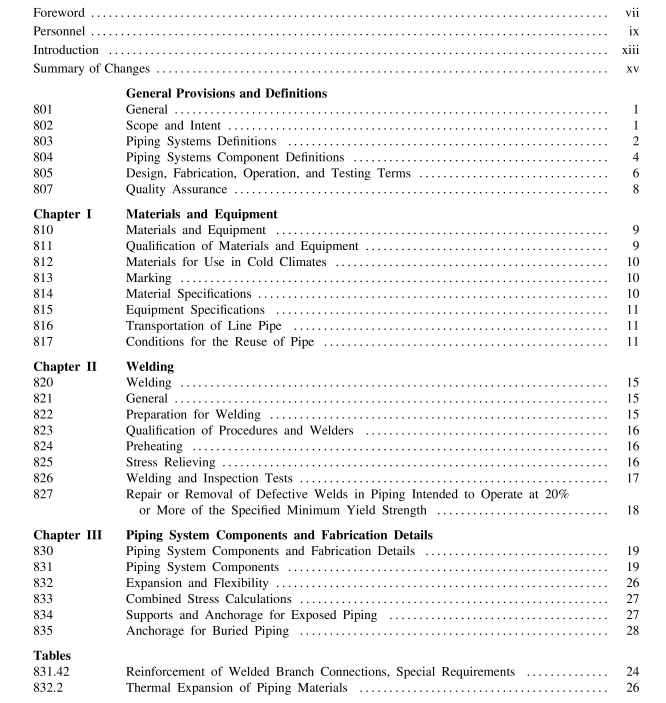 ASME B31-8a pdf download ASME B31.8-1999 GAS TRANSMISSION AND DISTRIBUTION PIPING SYSTEMS
805.12 For definitions of leakage investigation terms, see Appendix M.
805.13 Plastic Terms
805.131 Plastic Joint Nomenclature
(a) Solvent cement joint is a joint made in thermo- plastic piping by the use of a solvent or solvent cement that forms a continuous bond between the mating surfaces.
(b) Heat fusion joint is a joint made in thermoplastic piping by heating the parts sufficiently to permit fusion of the materials when the parts are pressed together.
(c) Adhesive joint is a joint made in plastic piping by the use of an adhesive substance that forms a continuous bond between the mating surfaces without dissolving either one of them.
805.132 Standard dimension ratio is the ratio of outside pipe diameter to wall thickness of thermoplastic pipe. It is calculated by dividing the specified outside diameter of the pipe by the specified wall thickness in inches. 805.133 Long-term hydrostatic strength is the estimated hoop stress in pounds per square inch in a plastic pipe wall that will cause failure of the pipe at an average of 100,000 hr when subjected to a constant hydrostatic pressure. (See Appendix D.)
805.14 Fabrication
805.141 Cold-springing, where used in the Code, is the fabrication of piping to an actual length shorter than its nominal length and forcing it into position so that it is stressed in the erected condition, thus compensating partially for the effects produced by the expansion due to an increase in temperature. Cold- spring factor is the ratio of the amount of cold spring provided to the total computed temperature expansion. 805.15 Uprating is the qualifying of an existing pipeline or main for a higher maximum allowable operating pressure.
805.2 Design
805.21 Pressure Terms
805.211 Pressure, unless otherwise stated, is ex- pressed in pounds per square inch above atmospheric pressure (i.e., gage pressure) and is abbreviated as psig.
805.212 Design pressure is the maximum pressure permitted by this Code, as determined by the design procedures applicable to the materials and locations involved.
805.213 Maximum operating pressure (MOP), sometimes referred to as maximum actual operating pressure, is the highest pressure at which a piping system is operated during a normal operating cycle.
805.214 Maximum allowable operating pressure (MAOP) is the maximum pressure at which a gas system may be operated in accordance with the provisions of this Code.
805.215 Maximum allowable test pressure is the maximum internal fluid pressure permitted by this Code for a pressure test based upon the material and location involved. 805.216 Standard service pressure, sometimes called the normal utilization pressure, is the gas pressure a utility undertakes to maintain at its domestic custom- ers’ meters. 805.217 Overpressure protection is provided by a device or equipment installed in a gas piping system that prevents the pressure in the system or part of the system from exceeding a predetermined value.
805.218 Standup pressure test demonstrates that a pipe or piping system does not leak, as evidenced by the lack of a drop in pressure over a specified period of time after the source of pressure has been isolated. 805.22 Temperature Terms
805.221 Temperature is expressed in degrees Fahrenheit (°F) unless otherwise stated.
805.222 Ambient temperature is the temperature of the surrounding medium, usually used to refer to the temperature of the air in which a structure is situated or a device operates.
805.223 Ground temperature is the temperature of the earth at pipe depth. 805.23 Stress Terms 805.231 Stress, expressed in pounds per square inch, is the resultant internal force that resists change in the size or shape of a body acted on by external forces. In this Code, “stress” is often used synonymously with unit stress, which is the stress per unit area. 805.232 Operating stress is the stress in a pipe or structural member under normal operating conditions.