AS 4314 pdf download – Founding—Patterns, pattern equipment and coreboxes for the production of sand moulds and sand cores 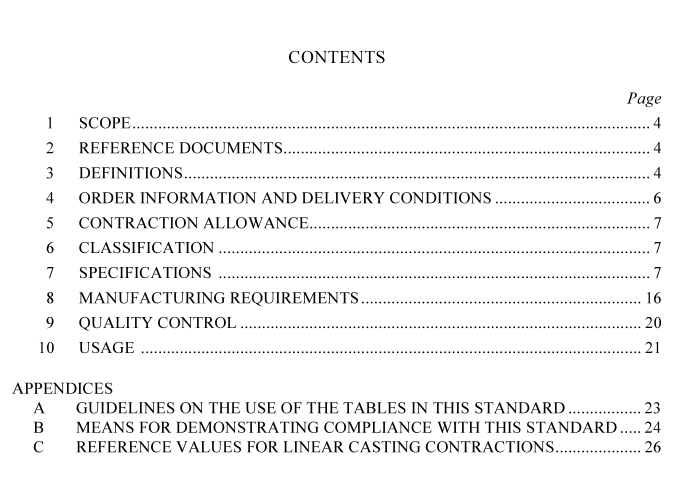 AS 4314 pdf download – Founding—Patterns, pattern equipment and coreboxes for the production of sand moulds and sand cores
3.4Sand mould
Part or assembly of parts,made of heat resistant sand (such as silica sand and zircon sand),which usually forms the external surfaces of a casting and is not re-usable after pouring.3.5Sand core
Part or assembly of parts, made of heat resistant sand (such as silica sand and zircon sand),which usually forms the inner surfaces of a casting and is not re-usable after pouring.
3.6 Pattern
Model which forms part or all of a subsequent mould or core assembly.3.7Corebox
Model which forms all of a core or part or all of a subsequent core assembly.3.8 Pattern equipment
All the components which make up all the necessary pieces to ensure the correctmanufacture of a mould.
3.9 Quality class
Classification system which enables the parties concerned with the manufacture and use ofpatterns， pattern equipment and core boxes to be aware of their properties (such as fitnessfor purpose, quality and expected usage).
3.10 Contract review
Analysis and/or check of the order details carried out by the parties concerned, both beforeand during the processing of the order.
3.11 Core print
Projection either attached to a pattern to form recesses in the mould or attached to a core atpoints where cores are to be supported.
3.12 Required machining allowance (RMA)
Material deliberately added to certain surfaces of patterns, pattern equipment and coreboxeswhich is removed, partially or wholly, from the casting during subsequent machining.
3.13Contraction allowance
The dimensional variation or allowance added to the pattern in order to compensate forshrinkage of the casting during cooling from the pouring temperature.
3.14 Taper
Slope or angle deliberately given to certain pattern or corebox surfaces to aid the strippingof the pattern from the mould or the core from the corebox.
NOTE: Taper is sometimes referred to as draft or draft angle.3.15Clearance
Space deliberately built into certain pattern or corebox surfaces to aid the assembly of themould and/or core.
4 ORDER INFORMATION AND DELIVERY CONDITIONS
4.1 General Clause
4 details the technical order information and delivery condition requirements to be agreed between the purchaser and the manufacturer (patternmaker). These requirements shall be in accordance with AS 4738.1. The patterns, pattern equipment and coreboxes may be ordered either by the purchaser or by the founder. If the founder does not order directly, then consultation between the purchaser and founder is required. As applicable, an agreement and an exchange of information carried out between the purchaser, the manufacturer (patternmaker), and the founder by the time of the acceptance of the order, is required to ensure a full understanding of the respective requirements of the parties concerned.
NOTE: The production of castings requires the use of patterns and/or coreboxes. The starting point in their manufacture is the drawing/numerical data of the as-cast casting and/or the machined part as agreed with the purchaser who can either—
(a) order the castings and pattern equipment together from the founder who can sub-contract the pattern equipment manufacture to a patternmaker; or
(b) order the castings from the founder and the patterns, pattern equipment and coreboxes from the manufacturer (patternmaker) separately.
4.2 Pre-production requirements The following items shall be the subjects of agreement at the time of enquiry and before placing the order:
(a) Cast material(s) and its (their) identification.
(b) Moulding and/or coremaking techniques.
(c) Dimensional tolerances.
(d) Mould and core joint lines.
(e) Pattern equipment identification.
(f) Pattern surface coating.
(g) Contractions.
(h) Clearances.
(i) Tapers.
(j) Required machining allowances.
(k) Pattern material(s).
(l) Pattern material quality class(es).
(m) Extent and type of quality inspection.
(n) Protection and packaging for transportation and storage.
4.3 Mandatory information
The order shall include information on:
(a) Designation of material to be cast (symbol and/or number).
(b) Number of castings to be produced.
(c) Number of sets of pattern equipment to be supplied.
(d) Delivery time.