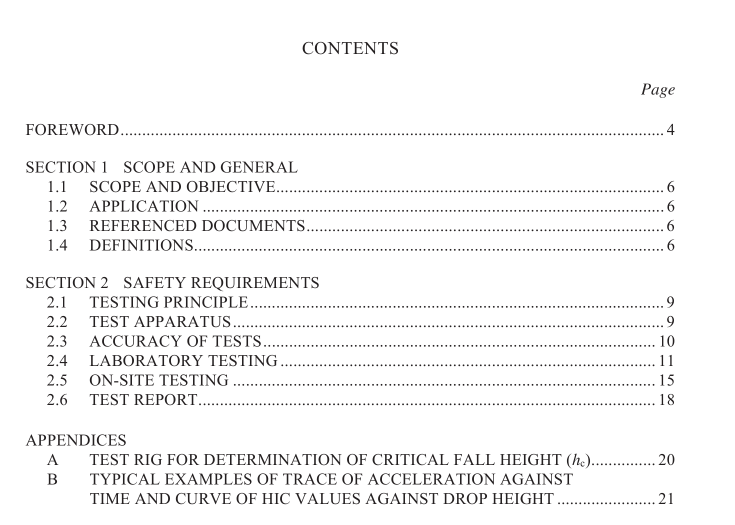 AS 4422 pdf download – Playground surfacing-Specifications,requirements and test method
1.4.3Drop height
The distance between the test position on the surfacing and the lowest point of the freefalling missile prior to release.
1.4.4 Drop test (laboratory testing)
A minimum serics of four impact measurements carried out from increasing fall heights,such that at least one measurement gives an HlC value above 1000, or a gmax value above200.
1.4.5 Free height of fall (hi)
The greatest vertical distance from the clearly intended body support to the impact areabelow.
1.4.6gmaxs
The multiple of the acceleration (g) into gravity at the carth’s surface at sea level thatrepresents maximum acceleration experienced during impact.
1.4.7Head injury criteria (HIC)
A measure of impact severity that considers the duration over which the most criticalsection of the deceleration pulse persists as well as the peak level of that deceleration.
1.4.8 HIC duration
The time interval over which the HIC is calculated,i.e.( – 8z).
NOTE: The i – f are two intermediate values of : between tsart and tem; attaining the maximumHIC value.
1.4.9Impact-attenuating surfacing (IAS)
A surface，whereby the kinetic energy of an impact is dissipated by localized elastichysteresis,deformation or displacement such that the maximum acceleration and HIC isreduced and the HIC duration is increased.
1.4.10 Impact attenuation
Property whereby the kinetic energy of an impact is dissipated by localized elastichysteresis, deformation or displacement.
1.4.11 lmpact measurement
The HIC value from the recorded acceleration of the missile falling from one fall heightonto one test position.
1.4.12 Loose-fill surface
Surfacing material supplied for the purpose of impact attenuation in playgrounds, consistingof unbound，granular，chipped or fibrous elements such as sand，wood-fibre，bark mulch,wood chips or other materials. These may be organic or inorganic.
1.4.13 Measured fall height (hm)
The height from which a single drop is conducted (being the hr with a minimum additional10% allowance) to determine the HC, gmax and HIC duration of the surface under test at aparticular location.At the measured fall height the HlC and the gmax will be less than orequal to 1000，less than or equal to 200g,and greater than 3 ms respectively，for asatisfactory result.
1.4.14 Test position
A position on the material to be tested，located perpendicularly below the centre of themissile.
2.1TESTING PRINCIPLE
Test specimens or installed areas of the impact-attenuating material under test are struck byan instrumented missile in a defined series of impacts from different drop heights.Thesignal emitted by an accelerometer in the missile during each impact is processed to yield aseverity from the measured impact energy, defined as HIC.
NOTE: See Appendix B, Figure B1.
The HIC of each impact is plotted and h。 shall be determined as the lowest drop heightproducing a HIC value of 1000.
2.2TEST APPARATUS2.2.1 Test rig
2.2.1.1 General
The test rig shall comprisc—
(a)a missile with accelerometer (see Clause 2.2.1.2); and
(b)if using a triaxial (free-fall) accelerometer, a release system (see Clause 2.2.1.3) and
length mcasuring equipment (see Clause 2.2.1.5); or
(c)if using a uniaxial (guided) accelerometer, a guidance system (see Clause 2.2.1.4 ) andvelocity measuring equipment (see Clause 2.2.1.6).
2.2.1.2 Missile and accelerometer
The missile shall consist of either—
(a)a hemispherical ended aluminium alloy missile; or(b)a spherical shaped missile.
lt shall have a diameter of l60 mm ±5 mm, a mass of 4.6 kg ±0.05 kg， with a maximumdeviation from the hemispheric surface of 0.5 mm，incorporating an accelerometer asfollows:
(i) Triaxial accelerometer for free falling missile,mounted in the centre of gravity of the
missile.
(ii) Uniaxial accelerometer for guided missile,aligned to measure in the vertical axis 15°
and located directly above the centre of mass.
The impacting part of the missile between the lower boundary and accelerometer shall behomogencous and free from voids.
2.2.1.3 Release system
In the case of free-fall impact tests, the release system shall not create a rotation moment orany other forces on the missile, when released.
NOTE: A rotation moment or other forces on the missile would cause additional accelerationsafter impact in the triaxial accelerometer， leading to an uncontrollable error of the resultant forthe vertical measurement.

AS 4314 pdf download - Founding—Patterns, pattern equipment and coreboxes for the production of sand moulds and sand cores