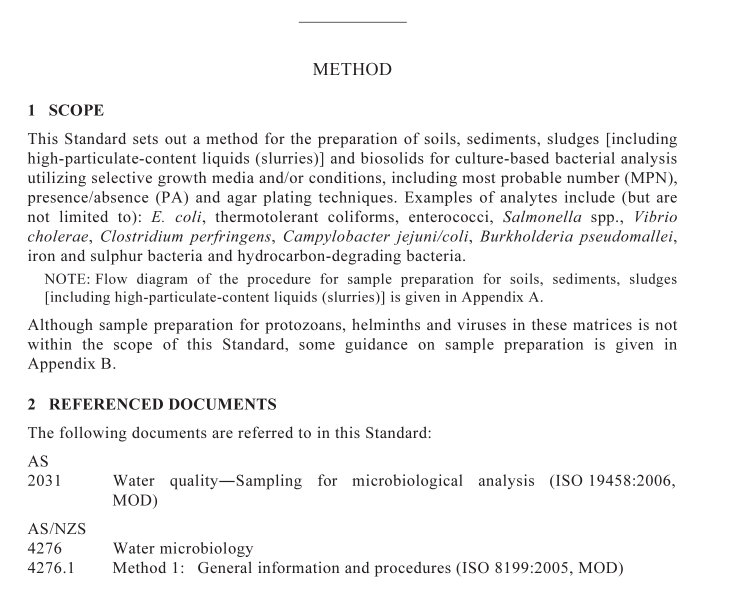 AS 4276.23 pdf download – Water microbiology Method 23: Soils, sediments, sludges, slurries and bio-solids—Procedures for sample preparation
3 DEFINITIONS
For the purposes of this Standard the following definitions apply:3.1 Analyte
The chemical or biological entity that is of interest and intended to be measured in ananalytical procedure.For example, E. coli is an analyte.
3.2 Biosolids
Treated organic solids produced by wastewater treatment processes that in most cases canbe beneficially recycled. The term biosolids does not include untreated wastewater sludges,industrial sludges or the product produced from the high temperature incineration of sewagesludge.Biosolids are typically thickened and dewatered and include blended materials suchas soil improvers,fertilizers, composts and worm castings.
NOTE: The terms ‘sludge’and ‘biosolid’are often used synonymously，however biosolids aretreated sludge.For the purposes of this Standard, either term may be used, with that preferred bythe end-user recommended, with the exception of untreated wastewater sludges,industrial sludgesand the product produced from the high temperature incineration of sewage sludge.
3.3Cell calibrator equivalent (CCE)
A quantity of nucleic acid equivalent to a cell.Obtained by calibration studies using nucleicacid-based techniques.
3.4 Homogenate
A preparation of the sample that has been made uniform or similar in composition by themixing or blending of unlike components of the sample.
3.5 Limit of detection (LoD)
The lowest quantity of an analyte that can be distinguished from the absence of that analyte(a blank value or negative control) within a stated confidence limit.
3.6Matrix
Matrix refers to the components of a sample other than the analyte of interest. The matrixcan have a considerable effect on the way the analysis is conducted and the quality of theresults obtained.
3.7Measurand
The quantity per unit of the analyte intended to be measured.For example,’most probablenumber of E. coli per gram’ is a measurand.
3.8 Sample
A limited quantity of a product that is intended to be similar to and represent a largeramount of that same product.
3.9 Sediment
Solid fragmented material，such as silt，sand，gravel，chemical precipitates and organicparticles，transported and deposited by water，ice,or wind and which has settled to thebottom of liquid suspension.Sediments are typically saturated or semi-saturated.
3.10 Sludge
Soft, thick material produced from the accumulation of solids in a variety of industrialprocesses such as chemical coagulation，flocculation and sedimentation during wastewatertreatment.Sludges are otherwise untreated and have generally higher water content than biosolids (typically <25% solids). NOTE: The terms ‘sludge’ and ‘biosolid’ are often used synonymously, however biosolids are treated sludge. For the purposes of this Standard, either term may be used, with that preferred by the end-user recommended, with the exception of untreated wastewater sludges, industrial sludges and the product produced from the high temperature incineration of sewage sludge. 3.11 Slurry A thin mixture of an insoluble substance with a liquid. Generally free flowing. 3.12 Soil The top layer of the earth’s surface, consisting of rock and mineral particles mixed with organic matter, with a range of water content up to saturated. This includes subsoils. 3.13 Subsample A portion of the original sample that is representative of the original sample, thereby assuring equivalency in analytical measurements. This may be created by trimming, subdividing, splitting of, or discrete collection from, the original sample. 4 PRINCIPLE Solid, semi-solid and viscous liquid (i.e. high moisture content sludge) samples are mixed as much as practicable. Subsamples as necessary are quantitatively suspended in a homogenization buffer or an enrichment medium. Sample homogenization procedures are based on whether the sample is liquid or solid. The suspension is subjected to vigorous mixing to produce a uniform homogenate by any of several methods (shaking, blending, stomaching) and pH adjusted to 7.0–7.5 or the pH of the applicable growth medium. The homogenate may then be used directly as sample material for MPN-based determinations and serially-diluted for both MPN, spread-plate and membrane filtration methods. Liquid enrichment media are the starting point for both MPN and presence/absence analyses. For reporting of results on a dry weight basis, a subsample is dried at 103°C–105°C to constant weight for gravimetric determination of percent total solids, with the result being used to calculate the MPN or cfu (colony forming units)/g dry weight. NOTES: 1 A 10-fold w/v dilution results from the solids homogenization process. Such dilution can reduce interference by matrix materials on growth media, including matrix-associated potentially toxic materials such as metals and antimicrobials. The impact of such interferences should be considered if homogenized sample is analysed directly without dilution; such as for liquid samples, or homogenates produced with a <10-fold concomitant dilution. 2 Sample must be homogenized in order to effectively adjust pH.

AS 4314 pdf download - Founding—Patterns, pattern equipment and coreboxes for the production of sand moulds and sand cores