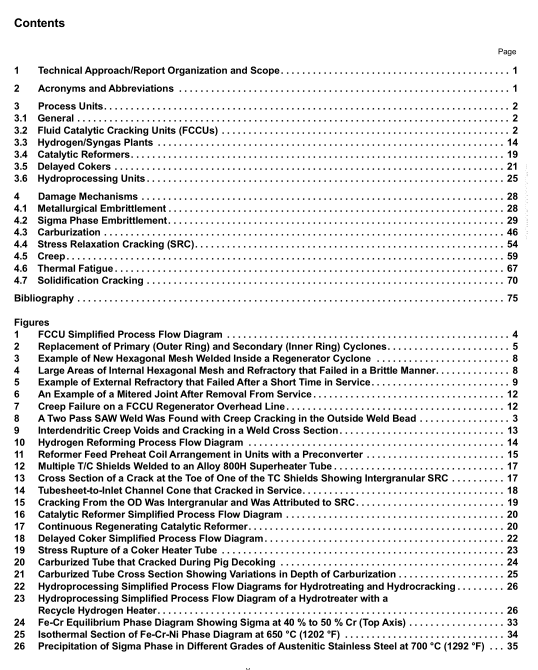 API TR 942-B pdf download Material, Fabrication, and Repair Considerations for Austenitic Alloys Subject to Embrittlement and Cracking in High Temperature 565 °C to 760 °C (1050 °F to 1400 °F) Refinery Services
3 Process Units
3.1 General Table 1 summarizes common embrittlement mechanisms in each of the listed refinery process units. Implications for specific equipment are discussed in more detail in the section for each respective process unit. Information on damage mechanisms can be found in API 571 and in Section 4 of this document. 3.2 Fluid Catalytic Cracking Units (FCCUs) 3.2.1 Process Description FCCUs are used to process heavy feedstocks, converting them to gasoline, diesel, and furnace oils. A simplified process flow diagram for the FCCU is shown in Figure 1 [1]. The catalytic reaction occurs mostly inside the riser prior to reaching the reactor at temperatures ranging from approximately 480 °C to 565 °C (900 °F to 1050 °F). In modern FCCUs, the “reactor” functions as a hydrocarbon/catalyst separator. During the process, the catalyst becomes deactivated as it becomes coated with carbon (coke). The catalyst is sent to the regenerator where it is exposed to air, promoting the burn off of coke at approximately 650 °C to 780 °C (1200 °F to 1475 °F).
Inside FCCU reactors and regenerators are cyclones which are used to separate the catalyst from the overhead vapor streams. Most regenerators have multiple sets of primary and secondary cyclones. Primary cyclones direct the vapor flow from inside the reactor or regenerator in a centrifugal pattern, forcing the heavier catalyst particles outward against the inside wall, and allowing the catalyst particles to then fall down into the catalyst bed. The lighter vapor stream exits out the top of the primary and into the secondary cyclone to remove residual catalyst from the vapor stream. Primary and secondary cyclones can be seen in Figure 2 [2]. Units that process heavier feeds are called resid fluid catalytic cracking units (resid FCCUs) and these feeds typically have higher sulfur contents. In addition, resid FCCU feeds typically develop higher carbon residues on the catalyst particles. Carbon residues, as indicated by the Conradson Carbon Residue test of Resid FCCU feeds, are significantly higher with up to 5 to 10 wt.%, compared to <1 wt.% for a typical FCCU feed. These heavier feeds also usually contain more metals, and require higher temperatures to crack. This can lead to increased carburization and sigma embrittlement of regenerator cyclones if higher burn temperatures are used. There are two modes of regenerator operation: Complete Carbon-monoxide (CO) Combustion (CCC) or Partial CO Combustion (PCC). Both types of operation are subject to upsets (including “afterburns”) that can cause rapid localized temperature excursions. Afterburn (CO combustion) in a regenerator can lead to localized high temperatures, up of 900 °C (1650 °F) or hotter, which can cause major damage to regenerator internals. Causes of afterburn in a PCC Regenerator include the following. — Lack of promoter activity that causes oxygen slip to the dilute phase. (Promoters are catalyst additives that enhance control of CO, SO x , and NO x .) — Excessive air/coke ratio (too close to the stoichiometric ratio). Regenerators are intended to operate either with clearly less than stoichiometric air (PCC) or with excess air (greater than 1:1) where there is CCC operation. Afterburns tend to be more of a problem with CCC operation. Reasons for afterburn in a CCC regenerator include: slow CO combustion in the dense bed, due to lack of promotion activity and localized deficit in the air supply to the bed, either from asymmetric design or air grid damage. 3.2.2 FCCU Damage Mechanisms 3.2.2.1 General The rate of damage mechanism development depends on a complex set of factors that include: exposure time, temperature, thermal cycles, process upsets, the number of start-ups and shut-downs, peak temperatures, mode of operation (e.g. partial or full combustion), and operating upsets (such as afterburns). In particular, process upsets and rapid start-ups and shut-downs all generate abnormal stresses that can both initiate and propagate cracking.