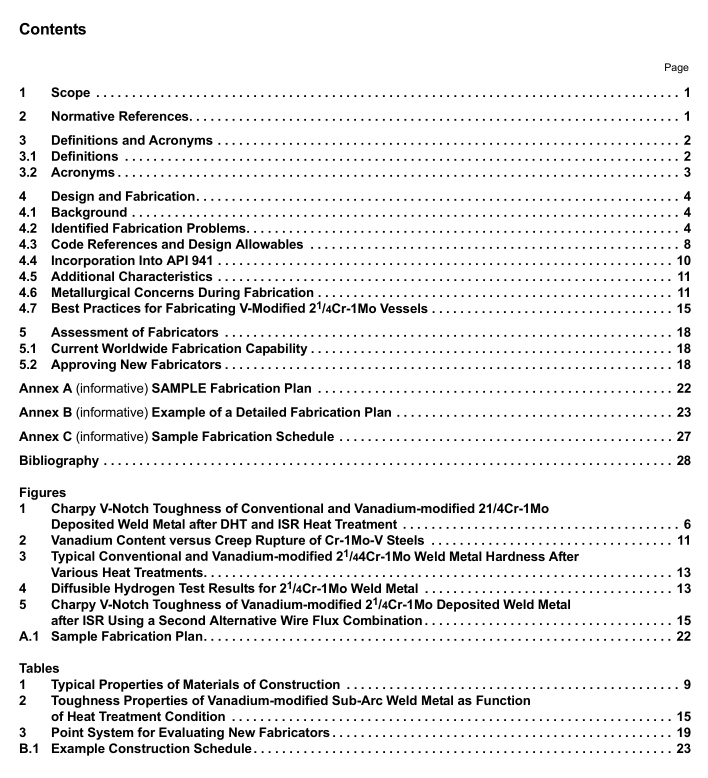 API TR 934-B pdf download Fabrication Considerations for Vanadium-Modified Cr-Mo Steel Heavy Wall Pressure Vessels
4 Design and Fabrication
4.1 Background Vanadium-modified 2 1 / 4 Cr-1Mo and 3Cr-1Mo alloys used for the fabrication of heavy wall pressure vessels offer definite advantages over conventional Cr-Mo alloys. The advantages include increased resistance to hydrogen attack, a lower susceptibility to hydrogen embrittlement, increased resistance to weld overlay disbonding, and higher strength providing thinner and lighter vessels. The vanadium-modified alloys are almost always supplied in the quenched and tempered condition.
Typically when the thickness is above about 100 mm (4 in.), tempering temperature is below the final PWHT temperature. Both the conventional and vanadium-modified Cr-Mo steels are usually specified to be vacuum degassed with low tramp element levels. The vanadium-modified alloys with improved properties have some less desirable fabrication considerations. The materials tend to exhibit characteristics such as higher hardenability which results in higher hardness in all areas around welds (weld, base metal, and heat affected zone), and the requirement for higher postweld heat treatment (PWHT) temperatures. The vanadium-modified alloys are also known for reduced notch toughness at lower temperatures in the as-welded condition, and thus require intermediate stress relieve (ISR) rather than dehydrogenation heat treatment (DHT) in restrained and highly stressed joints, such as nozzle-to-shell, nozzle-to- head welds and weld deposits for support rings and pads. Inadequate PWHT holding times can also leave welds with unacceptable low toughness areas. Overall, vanadium-modified 2 1 / 4 Cr-1Mo and 3Cr-1Mo alloys offer considerable advantages over conventional Cr-Mo alloys provided they are constructed with extra care by a quality-focused and informed fabricator.
4.2 Identified Fabrication Problems Vanadium-modified steels require additional considerations that need to be implemented during fabrication. The purpose of this document is to assist fabricators in successfully fabricating with vanadium-modified steels. This section lists some problems that have been encountered by different fabricators in the past during the course of fabricating with vanadium-modified steels and it is the intent of this document to inform the readers of these problems so that steps can be taken to ensure that they are not repeated.
4.2.1 Preheat and Interpass Temperature It cannot be emphasized enough that correct preheat and interpass temperatures are extremely crucial when fabricating with vanadium-modified steels, even more so than for conventional Cr-Mo steels (although they are crucial for those alloys also). The preheat and subsequent interpass temperatures should be constantly monitored to ensure that the correct preheat is maintained. Too low a preheat or an interruption of preheat may cause cracking and this is a common cause of problems encountered during fabrication with vanadium-modified steels. A comprehensive fabrication plan should include preheat, the method of preheat application, and the method for monitoring preheat. The maximum interpass temperature will vary based on the welding process and specific brand of filler metals. The limits range from as low as 230 ºC (445 ºF) to about 300 ºC (570 ºF) and in some cases on thinner plates, it results in the need to pause the welding. Also, on thinner plates, it can be important to measure the interpass temperature in the groove with digital thermometers rather than using tempil sticks on the surface. While large thickwall equipment like reactors usually have no problems with staying below the maximum interpass temperature, smaller, thinner components such as exchangers sometimes need a pause between passes to meet this requirement. See also 4.2.5.2.
4.2.2 Cutting If flame or arc cutting is performed on vanadium-modified materials, the area to be cut should be properly preheated and the heat affected zones should be removed by grinding or machining. Experience indicates that about 3 mm ( 1 / 8 in.) of material should be removed for flame cutting and 1.5 mm ( 1 / 16 in.) for plasma cutting. Due to the extent of material removal, preparation by machining is recommended following all thermal cutting operations, with subsequent grinding. These steps should be followed by MT or PT. 4.2.3 Forming The subject of forming has been a controversial issue with some fabricators. Apart from “hot” forming above the Ac 3 upper transformation temperature (above 900 ºC [1650 ºF]) which requires subsequent reheating and subsequent quenching and tempering, some fabricators take advantage of “cold” forming or forming below 480 ºC ( 900 ºF) to maximize the rolling effect of their rolls (this is also called warm forming). This is not to be confused with forming at ambient or near-ambient temperatures which can also be referred to as cold forming. Cold forming or cold rolling vanadium-modified materials at ambient temperatures are not typically recommended, and a minimum through-thickness preheat temperature of 150 ºC (300 ºF) is typically used for all forming operations.
This can be a challenge for some fabricators. However, if an adequate preheat is not used during cold forming or rolling, the fabricator runs the risk of cracking during the rolling operation and possibly the risk of catastrophic cracking through the entire plate width. 100 % MT inspection after forming should be specified when cold forming is carried out (and is required by API 934-A). Prior to cold forming, a forming procedure should be developed covering the plate edge preparation, preheating, forming steps and post heating.