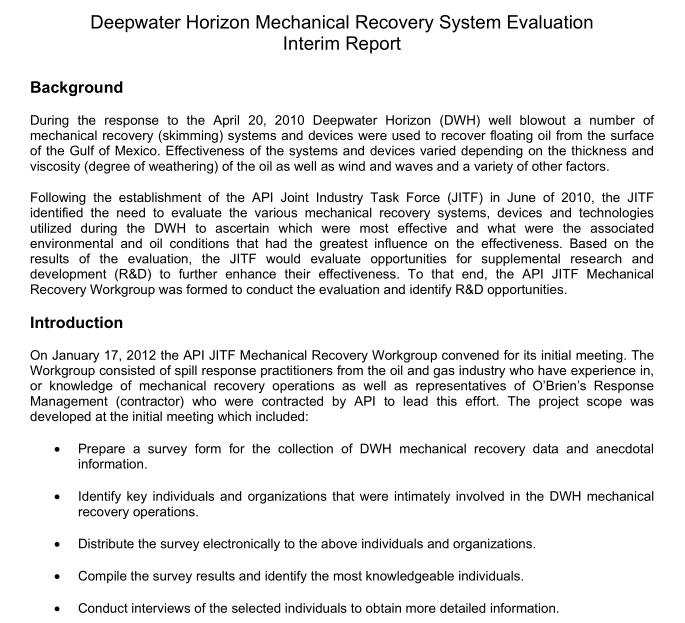 API TR 1143 pdf download Deepwater Horizon Mechanical Recovery System Evaluation Interim Report
Following the electronic survey, the contractor then identified a sub-set of 10 respondents who appearedmost knowledgeable and attempted to conduct phone interviews to fill in any gaps and obtain additionaldata on the recovery operations. This report was then prepared to summarize the survey process andresults.
survey Results
Electronic Survey Responses
A total of 83 persons received the first and/or second electronic survey via email, representing a cross-section of DWH responders from private industry, state,and federal entities. Factoring in a number ofextensions, in total respondents were given roughly 10 weeks to respond to the survey. Despite frequentprompting and several extensions, only about 25 responses to the survey were received.
lt is possible that at least some of the targeted individuals were reluctant to participate on any DWHstudies due to ongoing litigation or concerns of violating confidentiality agreements that many responderssigned with their employers. Another possible contributing factor is the survey required an hour or so tocomplete and many people may not have wanted to volunteer that much time.
The responses received did not represent an adequate cross section of mechanical recovery operations.The raw data represented individuals who worked only on the weir-skimming systems in field capacities.Their responses capture a narrow perspective of the value of their efforts, many of which were limited torecovered liquids transfer and ‘storage operations which did identify ‘the need for suitableplatforms/floating docks offshore to better facilitate offloading of recovered oil from floating bladder tanksor skimmer tanks. Similarly there were several comments regarding insufficient recovered oil storagecapacity offshore which negatively affected recovery volumes. It should be noted，however，that thisobservation is contrary to presentations at the 2011 Clean Gulf Conference which indicated interimstorage was not an issue. No useable data on the effectiveness of the recovery equipmentsystems wereprovided in the responses to the electronic survey.
Verbal Survey Responses
There were three participants who did not complete the electronic survey but did agree to speak to thecontractor under confidentiality terms. Due to the interactive nature of the discussions, the conversationsgenerally resulted in better and more relevant information being obtained than through the electronicsurveys.Consequently, this information is highlighted in this report. The verbal feedback is summarizedbelow.
One responder who served in a very active mechanical recovery capacity evaluated the use of theskimming systems and indicated:
“Weir systems offered better value (assume performance over other skimmer types was theintended message) in offshore areas when waves were < 1 to 3 foot chop and in confused seastates but vegetative debris did cause numerous delays to skimming operations." “Ocean buster systems were great pieces of equipment."(Assume intended to convey they hadsuperior performance to other skimmers.) .“Oleophillic skimmers offered more forgiveness (Assume meant flexibility in different oils and conditions. ) than weir skimmers." One survey participant who was involved in other operations had also observed numerous mechanical recovery operations and provided valuable feedback. The individual identified the need for a solid communications plan between aerial surveillance platforms and mechanical recovery vessels to ensure the aircraft can effectively direct the vessels to the heavier oil. He indicated there were instances where there was limited direct communications between the persons on the boat and the observer in the aircraft. Additionally, helicopters were periodically used, perhaps out of necessity, for offshore aerial surveillance and direction of mechanical recovery vessels but could not remain on station for more than 30-45 minutes, due to the lack of an offshore fueling station. This was not enough time to set up and implement an effective mechanical recovery activity. It should be a priority to use fixed wing aircraft to guide or direct mechanical recovery operations located more than 40 miles offshore.API TR 1143 pdf download