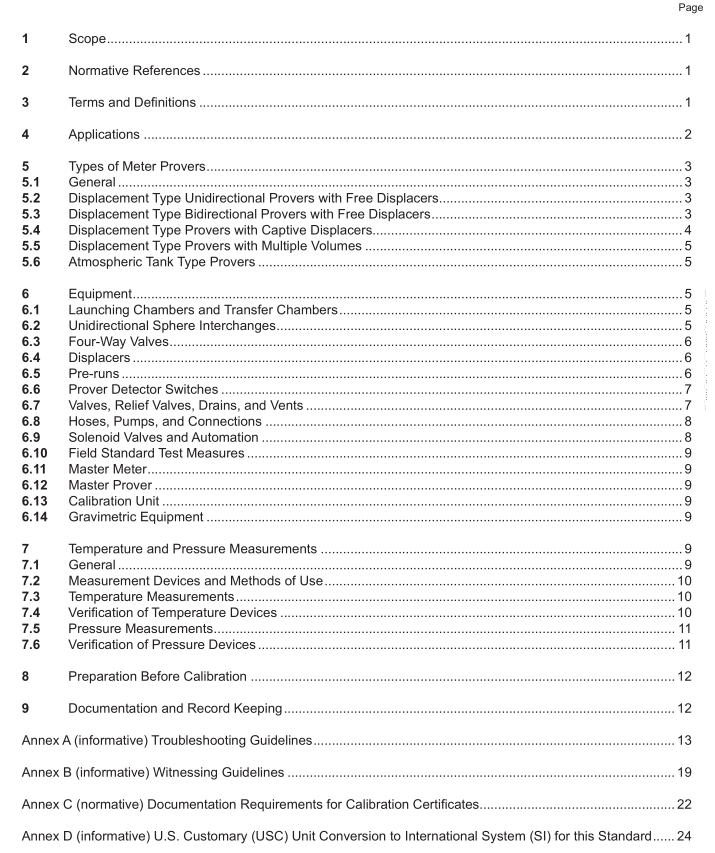 API MPMS 4.9.1 pdf download Manual of Petroleum Measurement Standards Chapter 4.9.1
Since these type provers have externally mounted optical detectors, the thermal efect on the detector mounting might not be the same as the efect on the measurement area (prover barrel). For example, if both the prover barrel and the mounting that defnes the linear distance between the detector(s) were the same metal, the thermal efects would be the same. In most cases, the prover barrel is one type of steel while the detector(s) mounting (which defnes the linear distance between the detector(s)) is another type of steel. Diferent types of steel have diferent thermal coefcients of expansion, and their expansion has to be calculated independently. In terms of a prover calibration, the main efect is that it is necessary to obtain both a prover volume and the detector mounting temperature.
5.5 Displacement Type Provers with Multiple Volumes If a prover has multiple switches, each set of switches determines a stand-alone and independent volume. If more than one calibrated volume is to be defned, the volumes shall be established with independent calibrations when using the waterdraw or gravimetric method. If the master meter method is used, data for the individual calibrated volumes can be collected simultaneously with proper equipment and procedures. 5.6 Atmospheric Tank Type Provers An atmospheric tank prover is a volumetric vessel with an upper neck, upper sight glass, upper scale, and an upper and lower cone usually separated by a cylindrical section. Diferent types are identifed by the way in which their bottom “zero” is defned. Atmospheric tank provers are described below:
— Bottom-weir type: This prover has a bottom neck beneath the lower cone. The bottom neck may or may not have a sight glass and scale, but in any case, it has a fxed bottom “zero” defned by the weir.
— Dry-bottom type: This prover usually does not have a bottom neck under the lower cone. The closed bottom drain valve defnes the bottom “zero,” just as on a feld standard test measure.
— Wet-bottom type: This prover has a bottom neck beneath the lower cone. The bottom neck always has a sight glass and scale. The bottom “zero” is defned by the “zero” on the scale. In practice, readings above and below the “zero” in the lower neck are common.
6 Equipment
6.1 Launching Chambers and Transfer Chambers With both unidirectional and bidirectional provers, an area is provided in which the displacer can rest when not in use. With bidirectional ball displacer type meter provers, this space is defned as a launching chamber. Bidirectional provers using sphere displacers require launching chambers at both ends of the prover pipe. Piston type bidirectional provers do not require expanded launch chambers at either end of the prover pipe because the fowing stream does not go around the piston, but is diverted upstream of the launch chambers by means of check valves. On unidirectional meter provers, a transfer chamber is used in combination with one or more valves to store the sphere away from the fowing stream, and to provide a means to relaunch the displacer when required. 6.2 Unidirectional Sphere Interchanges The sphere interchange provides a means for transferring the sphere from the downstream end of the proving section to the upstream end. Transfer of the sphere may be accomplished with several diferent combinations of valves or other devices to minimize bypass fow through the interchange. A leak-tight seal between the upstream and downstream sides is essential at the moment the displacer actuates the frst detector, while it travels between the detectors, and when it actuates the second detector in any given pass. The seal shall be verifed to validate