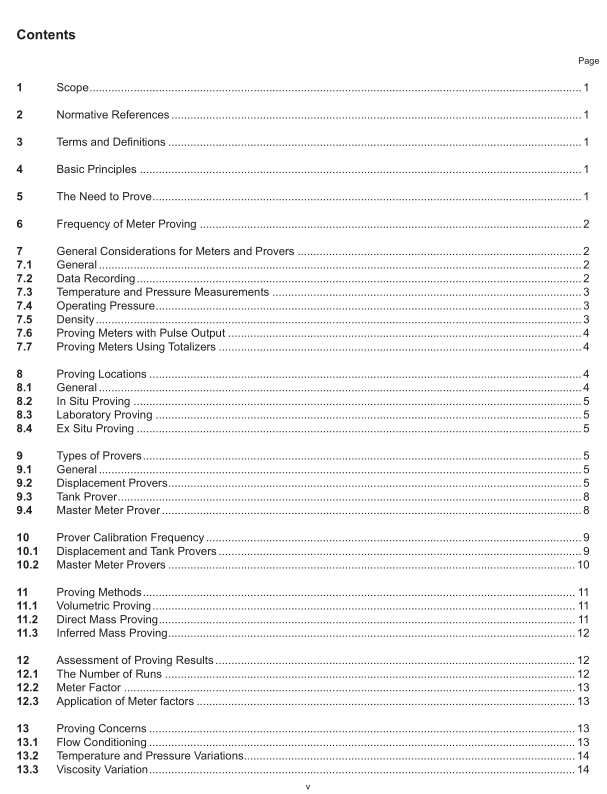 API MPMS 4.8 pdf download Manual of Petroleum Measurement Standards Chapter 4.8
c) the mechanical or electrical components of the meter have been opened, changed，repaired,removed.
exchanged, or reprogrammed;
d) changes in operating conditions have occurred, such as fiuid type, density, viscosity,temperature , pressure,
or flow rate.
6 Frequency of Meter Proving
The frequency required for proving varies from several times a day to twice a year or even longer dependingupon the reasons listed in Section 5.Other reasons are:
a) value of the liquid,
b)cost/benefit to prove,c)meter proving history,d) meter system stability,
e) variations of operating systems.
The actual proving frequency is dependent upon the contract or procedures established by the operator of themetering system. This standard does not define proving frequency of meters.
ln general, the proving frequency for a new system starts with short intervals and may be extended to longerintervals as confidence increases in the system.The operator should specify the interval of time or a quantity ofthroughput, after which the meter should be proved again.
ln a situation where custody transfer accuracy is not required, and where viscosity and temperature do not varytoo widely,it may be sufficient for meters to be re-proved at specified intervals, such as every month or two whenthe metering system is new, extending to once in six or perhaps 12 months when the reliability of the metersystem has been established.
7 General Considerations for Meters and Provers7.1General
The meter should be operated within its performance curve,and the prover should be operated within its flowrate limitations.The meter should be proved as close as practical to the same conditions under which it normallyoperates.Meter performance is dependent upon process conditions. Therefore, during proving it is essential thatflow rate be maintained within the normal operating flow range of the meter.
7.2Data Recording
Manually recording data during the prove limits the ability to track changes in operating conditions over theproving and may increase the uncertainty of the meter factor.For manual data recording, it is necessary to proveunder the following conditions to minimize meter factor uncertainty:
a)stable fluid composition,
b) stable fluid temperature and pressure,c)stable fluid flow rate.
The use of automated data recording and computational software (proving computer) reduces the uncertaintyof the meter factor by averaging the changes in operating conditions and taking a greater number of data points
over the proving.The amount of variation that can be tolerated before affecting the repeatability requirement oruncertainty, or both, varies by liquid hydrocarbon type and actual operating conditions.
7.3 Temperature and Pressure Measurements
7.3.1 General
Accurate temperature and pressure measurements are necessary for all types of proving, except direct massproving.Proving systems with automated (computerized) recording of the required meter and prover datareduces proving uncertainty as compared with manual measurements. These two operating conditions shouldbe stabilized (in equilibrium) for best proving results. Stability of these conditions during the proving reducesmeter factor uncertainty.
7.3.2 Location
Prover temperature and pressure measurement shall be taken at locations as described in API MPMS Ch.4.2.API MPMS Ch. 4.4,and API MPMS Ch. 4.5 as applicable.
Meter temperature and pressure measurement shall be taken at locations as described in API MPMS Ch.5.1 asapplicable.
7.3.3Accuracy
Temperature and pressure values shall be within the ranges of the appropriate volume correction equations/tables (APl,GPA).
Thermometers or temperature transducers used for proving shall be the highest practical resolution asrecommended in API MPMs Ch.7[10].
Pressure gauges or pressure transducers shall be selected with a resolution that enables the recording ofpressure values as required in API MPMS Ch.12.2.
7.3.4 Discrimination
The proving temperature and pressure values shall be recorded as required in API MPMS Ch.12.2.
7.4Operating Pressure
lt is essential that both the prover and meter pressures be higher than the equilibrium vapor pressure of theliquid during proving. In lieu of an actual test, or test data to determine back pressure requirerments, the minimumback pressure should be 2 times the pressure drop through the flow meter plus 1.25 times the equilibriumvapor pressure (reference APl MPMS Chapter 5—Metering —various sections for minimum back pressurerequirements).
7.5 Density
There are various ways to determine density. For proving calculations, it is important to distinguish betweenflowing, observed, and base density, how each is determined, and when and where each might be applied toa proving. Density measurements may be made online or off-line via a representative sample. Density may becalculated from composition or published equations. APl MPMS Ch. 4.9F , API MPMS Ch.11.1l19, and APIMPMS Ch.14.6 1T” should be referenced for more information on density determination and calculation.Densityvalues shall be recorded as recommended in API MPMS Ch.12.2 and API MPMS Ch.5.6.