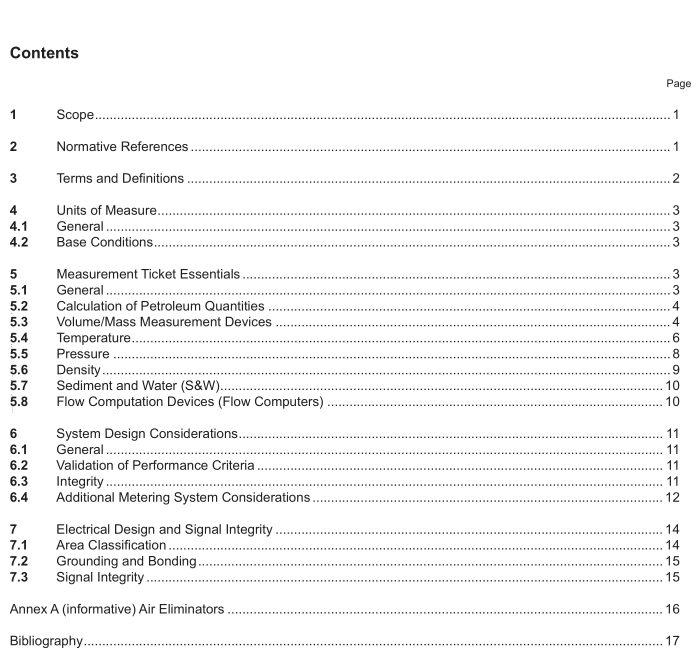 API MPMS 6.1A pdf download Manual of Petroleum Measurement Standards Chapter 6.1A
5.3.2 Volume Measurement Volume measurement is generally used where physical property changes in temperature and pressure are known and correction factors can be applied to correct the measurement to base conditions. Refer to API MPMS Chapter 11 [1] for more specifc guidance regarding volume correction factors for these commodities. Volumetric methods are not preferred when the relationship between pressure, volume (density), and temperature (PVT) is uncharacterized. The inferred mass measurement method uses a volumetric meter and fowing density to calculate the mass fow. The recommended applications for using the inferred mass measurement method are similar to the recommended applications for using the mass measurement method. Refer to 5.3.3 for more information on mass measurement.
5.3.3 Mass Measurement Mass measurement is commonly used for natural gas liquids mixtures (NGLs), ethane/propane mix, and refnery grade propylene, as well as high purity products, such as ethane, ethylene, and propylene. The volume of each component of an LPG mixture at base conditions can be accurately derived from the mass measurement process because, unlike volumetric measurement, the mass measurement process is not sensitive to the efect of pressure, temperature, intermolecular adhesion, and solution mixing on the measured stream. Due to these behaviors, the sum of the volumes of individual components in their pure state is greater than the volume of the mixture. Refer to API MPMS Ch. 14.7 [4] (GPA 8182) for more specifc instruction and guidance regarding mass measurement of NGLs, and to API MPMS Ch. 14.4 [3] (GPA 8173) for conversion of the measured mass to component volume. Mass measurement is preferred when the PVT relationship is not well understood, when there are no accepted industry standards for volume corrections for the fuid, or where volumes are highly sensitive to changes in pressure and/or temperature. Refer to API MPMS Ch. 5.6 for guidance on the use, specifc requirements for pressure and temperature compensation, and mass quantity calculations for Coriolis meters. Refer to API MPMS Ch. 14.7 [4] (GPA 8182) for more specifc instruction and guidance regarding mass measurement of NGL mixtures. For conversion of measured mass to equivalent volume, refer to API MPMS Ch. 14.4 [3] (GPA 8173).
5.3.4 Output Signal Meter signal output requirements are defned by API MPMS Ch. 4.2 and API MPMS Chapter 5.
5.3.5 Operating Flow Range Each type of meter has design considerations that limit the fow range across which the meter should be operated. Refer to API MPMS Chapter 5 for the limitations of each. A metering system with a required fow range that exceeds the capacity of a single meter should be equipped with multiple meter runs. In some cases, the initial capital and long-term operational costs associated with additional meter runs are ofset by the lower cost of a smaller-sized prover and by increased spare capacity in case of mechanical failure. If multiple parallel meters are used, a means for ensuring the fow rate is maintained within each meter’s specifed range should be provided. This objective can be accomplished by providing fow control for each meter or by staging meters on and of based on total fow rate.
5.3.6 Accuracy Meters that are chosen, installed, operated, and maintained in accordance with API MPMS Chapter 5 and proved in accordance with API MPMS Ch. 4.5 and API MPMS Ch. 4.8 are considered in conformance with the accuracy requirements for custody transfer.
5.3.7 Location API MPMS Chapter 5 defnes meter installation, orientation, and fow conditioning requirements.
5.3.8 Meter Proving A meter in service should be periodically proved to confrm its accuracy. Proving devices, methods, and operations are defned by API MPMS Chapter 4. Where multiple meters are installed in parallel, the system shall be designed such that one prover is not used to prove more than one meter at a time. Proper pairing of a prover to a meter requires consideration of repeatability and its efects on prover volume requirements. Meter response time also afects prover pre-run requirements. Failure to properly pair a prover to a meter can result in reproducible and repeatable meter factors that are inaccurate. For guidance on the location of the prover in relation to the meter under test, refer to the relevant API MPMS Chapter 6 sections for specifc requirements. Specifc requirements for meter proving are defned by API MPMS Chapter 4.