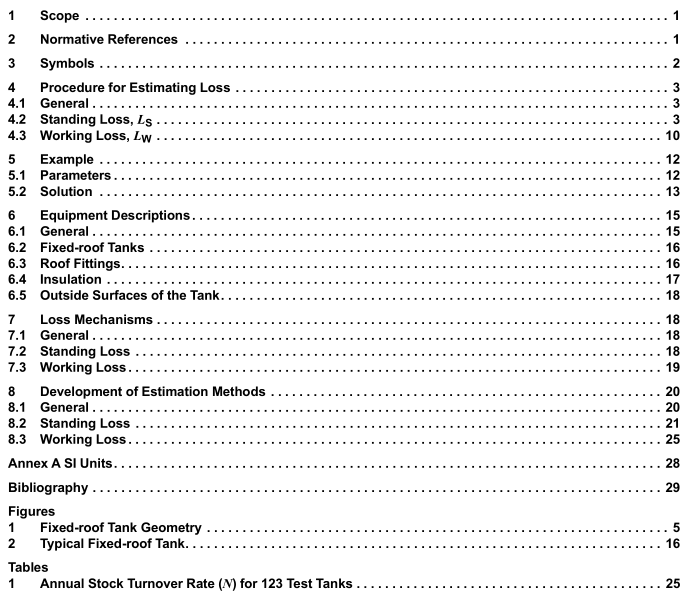 API MPMS 19.1 pdf download Manual of Petroleum Measurement Standards Chapter 19.1 Evaporative Loss from Fixed-roof Tanks
1 Scope
This standard contains methodologies for estimating the total evaporative losses of hydrocarbons fromfixed-roof tanks. The methodologies provide loss estimates for general equipment types based on laboratory,test-tank, and field-tank data.
Types of fixed-roof tanks and roof fittings described are for information only.
The equations estimate average annual losses from fixed-roof tanks for various liquid stocks, stock vaporpressures, tank sizes, meteorological conditions,and operating conditions.
The following special cases are addressed:
a) horizontal tanks,
b) higher volatility stocks (true vapor pressure greater than 0.1 psia),c) vent settings higher than 0.03 psia (0.5 ozin.2).
d)tanks that have either roof or shell insulation.
The estimation may be improved by using detailed field information, including climatic data and operationaldata for the appropriate time period.
The equations are not intended to be used in the following applications:
a) to estimate losses from unstable or boiling stocks or from petroleum liquids or petrochemicals for which the
vapor pressure is not known or cannot readily be predicted [to calculate emissions from tanks that containmaterial at or above its boiling point or the point at which material starts to flash, the APl modelE&P Tank(API 4697) can be used];
b) to estimate losses from fixed-roof tanks that have an internal floating roof (API MPMS Ch. 19.2 and
API 2569 [131 address these);
c)to estimate losses from cleaning fixed-roof tanks (API 2568 112 addresses this);d) to estimate losses from tanks with air sparging operations.
The estimation procedures were developed to provide estimates of typical losses from fixed-roof tanks thatare properly maintained and are in normal working condition. Losses from poorly maintained tanks may begreater. Because the loss equations are based on equipment conditions that represent a large population oftanks, a loss estimate for a group of fixed-roof tanks may be more representative than a loss estimate for anindividual tank.
Evaporative loss considerations are not the only criteria for equipment selection.Many other factors notaddressed in this standard, such as tank operation, maintenance , and safety, are important in designing andselecting tank equipment for a given application.
2Normative References
The following documents are indispensable for the application of this document. For dated references, onlythe edition cited applies. For undated references, the latest edition of the referenced document (including anyamendments) applies.
APIl Manual of Petroleum Measurement Standards (MPMS)Chapter 19.4,Evaporative Loss ReferenceInformation and Speciation Methodology, Third Edition, 2012, including Addendum 2
4 Procedure for Estimating Loss
4.1 General
The total loss L T (lb/yr) is the sum of the standing loss L S and the working loss L W :
L T = L S + L W
(1)
where
L S (lb/yr) is determined in 4.2;
L W (lb/yr) is determined in 4.3.
4.2 Standing Loss, L S
Aboveground and Underground Tanks 4.2.1
a) For uninsulated aboveground tanks, the standing loss L S (lb/yr) due to the diurnal ambient temperature
cycle is as follows:
L S = 365(  D 2 /4)H VO K S K E W V
(2a)
where
D, H VO , K S , K E , and W V are determined in 4.2.2 through 4.2.6, respectively;
constant 365 has units of days/yr.
b) For insulated aboveground tanks, assume no standing loss occurs due to the diurnal ambient temperature cycle. For purposes of estimating emissions, a storage tank should be deemed insulated only if the roof and shell are both sufficiently insulated so as to minimize heat exchange with ambient air. If only the shell is insulated, and not the roof, there will be heat exchange only through the roof. The partially insulated scenario may be evaluated by a more detailed heat exchange model as given in API MPMS Ch. 19.4, Third Edition (including Addendum 1), Annex I, or this partially insulated scenario could be approximated by an assumption of an uninsulated tank using Equation (2a). Equation (2a) addresses only temperature differentials in the vapor space resulting from the diurnal ambient temperature cycle. In the case of cyclic heating of the bulk liquid, see Equation (2b).
c) For underground tanks, assume no standing loss occurs due to the diurnal ambient temperature cycle because the insulating nature of the earth limits the diurnal temperature change in the tank.