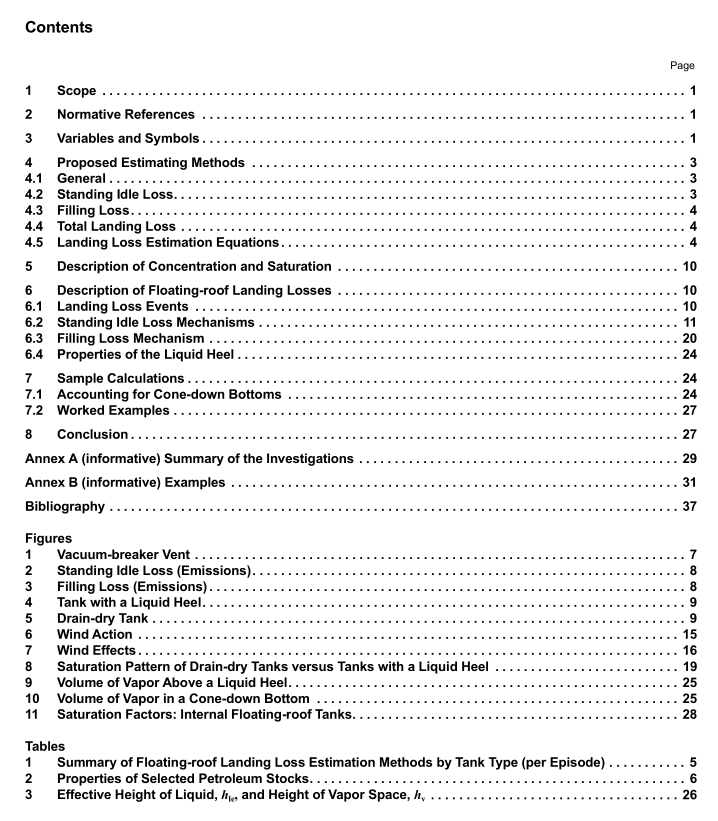 API MPMS 19.6.1 pdf download Manual of Petroleum Measurement Standards Chapter 19.6 Part 1—Evaporative Loss from Storage Tank Floating-roof Landings
Given that floating-roof landing losses occur when a floating-roof tank has been emptied below the level that lands the floating roof, this emission episode does not occur if the floating roof is maintained in a floating condition, nor does it occur with a tank that does not have a floating roof. 6.2 Standing Idle Loss Mechanisms General
6.2.1 The loss mechanism assumed for standing idle loss in the 10/1/97 TGB report [15] was breathing of the vapor space under the floating roof. This mechanism involves the generation of vapors beneath the floating roof by evaporation of liquid remaining in the bottom of the tank and the subsequent daily expulsion of a portion of these vapors in response to the daytime rise in ambient temperature.
As the ambient temperature rises and heats the tank, the vapors expand and a portion of them are pushed out of the vapor space. The vapors that remain beneath the floating roof are eventually all expelled by incoming liquid when the tank is refilled. Although these vapors are generated while the tank is standing idle, they are included with the filling loss rather than the standing idle loss. After subsequent consideration, it was concluded that the breathing mechanism model applies only to IFRTs with sufficient liquid remaining in the tank to continually replenish vapors lost by daily breathing (i.e. IFRTs with a liquid heel). The standing idle loss mechanism identified for EFRTs with a liquid heel is wind effects. When a liquid heel is not present because the tank has been drained virtually dry, then the standing idle loss mechanism appears to be the evaporation of the thin layer of liquid clinging to the bottom of the tank. This clingage mechanism applies to drain-dry operations for both internal and EFRTs. Internal Floating-roof Tanks with a Liquid Heel (Full or Partial)
6.2.2.1 General Standing idle losses from a landed internal floating roof with a liquid heel are modeled as a breathing phenomenon. The vapor space beneath the internal floating roof is assumed to behave in a manner similar to the headspace of a fixed-roof tank. The height of the vapor space beneath the floating roof is substituted for the vapor space outage in the calculation method published in API MPMS Chapter 19.1, where this phenomenon is termed standing loss.
6.2.2.2 Confidence in the Breathing Loss Model
The equation used in this model is derived from the ideal gas laws and should be a reliable predictor of breathing loss when the variables are evaluated correctly. Required inputs for this equation include temperature data and characteristic saturation levels for given scenarios. The methodology presented in API MPMS Chapter 19.1 predicts the liquid surface and vapor space temperatures to be within a few degrees above ambient temperature, with the increase being due to solar insolation. The effect of solar insolation on average temperatures for the space below a landed internal floating roof, however, may be assumed to be insignificant. This space is shaded by both the fixed roof and the internal floating roof, and there is relatively little area of the tank shell bordering this space as compared to the area of the tank bottom in contact with this space. Temperature fluctuations are further mitigated by the tank bottom being in contact with the ground.
The temperature of the stock liquid and vapor is likely to be within a few degrees of the ambient temperature when taken as an average over the course of a year for a large tank population, but may vary significantly for an individual tank on a particular day. The accuracy of the model would be improved if the actual temperature below the floating roof were known, in terms of both the daily average temperature and the daily range of temperature. The greatest uncertainty in the estimation of landing losses from a landed internal floating roof with a liquid heel is perhaps in the saturation level assumed in the model. The model uses the method for calculating the saturation level that is used in API MPMS Chapter 19.1 for fixed-roof tanks, with an upper bound imposed to limit the potential to overestimate. As noted in 6.2.2.3, this approach results in the estimated saturation factor while standing idle being equal to or less than that during filling. This is the expected relationship, in that additional vapors may be generated during the filling operation. The development of this variable in the model is discussed in more detail below.