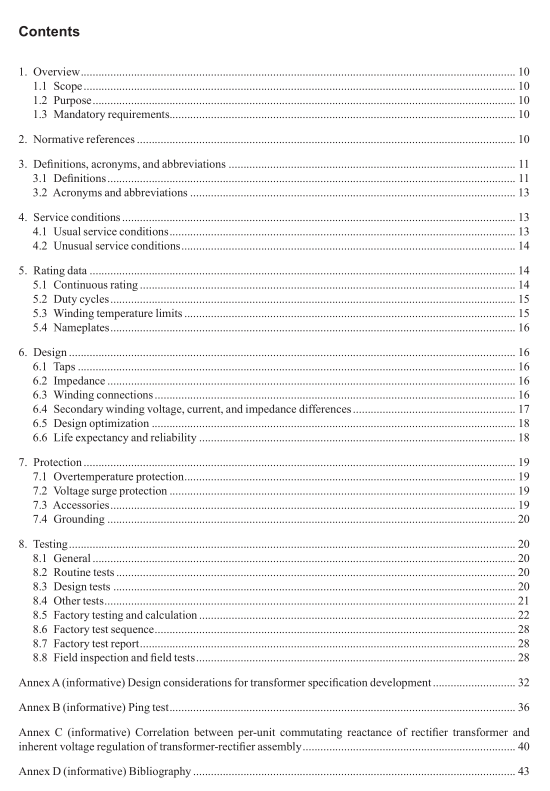 IEEE Std 1653.1 pdf download IEEE Standard for Traction Power Rectifer Transformers for Substation Applications up to 1500 V DC Nominal Output
cast-coil or cast-resin rectifier transformers: A transformer with windings that are vacuum cast or vacuumimpregnated in epoxy resin and fillers, and cured under a vacuum for purpose of minimizing the probability ofair voids contributing to partial discharges at higher voltages. Transformer windings of this type can be com-pletely cast in epoxy or partially cast with only the primary windings being cast in epoxy.
dry-type rectifier transformer: A transformer cooled by the circulation of air. Dry-type transformers alsoinclude transformers with encapsulated windings or cast coils. Cooling of dry-type transformers is achievedby ambient air, which may or may not be forced by means of fans.Vacuum impregnated cast-resin or cast-coil,vacuum pressure impregnated and vacuum pressure encapsulated are among the types of dry-type transform-ers used as rectifier transformer for traction power application.
ferroresonance: A nonlinear resonance involving a capacitance in series with a saturable inductance. Maxi-mum frequency for ferroresonace is 2 kHz to 3 kHz.Ferroresonance occurs when the inductance in the circuitis ferromagnetic.A transformer is an example of ferromagnetic inductance.
liquid-immersed rectifier transformer: A transformer cooled by the circulation of a liquid medium, eitherby natural convection of the liquid or by forced circulation. Liquid-Immersed transformers for traction powerapplication are widely used pending environmental compliance and high voltage application.
partial discharge(PD): A partial discharge is a localized electric discharge that only partially bridges theinsulation between conductors or between the insulation and surrounding air.A PD results from transient gas-eous ionization in an insulation system when voltage stress exceeds a critical value. It is measured in picocou-lombs, pC, where one pC is equal to 10-12Coulombs.
PD extinction voltage:The highest voltage at which partial discharge(PD) no longer exceeds the specifiedintensity. PD extinction voltage is detected on instrumentation adjusted to a specified sensitivity as the appliedvoltage is gradually decreased from the PD inception level.
PD inception voltage: The lowest voltage at which partial discharge(PD) is detected on instrumentation ad-justed to a specified sensitivity when the voltage applied to the test object is gradually increased from a lowervalue.
PD-free test voltage: A specified voltage, applied in accordance with a specified test procedure, at which thetest object should not exhibit partial discharges above the acceptable background noise level.
recovery voltage: The maximum voltage that appears across the terminals of a pole of a switching device afterthe breaking of the current.
rolling stock: As used in this standard, transit vehicles, trains, and the associated on-board equipment receiv-ing motive power from a traction power distribution system.
snubber device: A device containing a surge capacitor, resistor, and fuse that is used to reduce the magnitudeand frequency of the transient recovery voltage and terminal voltage.
traction power analysis: A study to analyze the performance of the traction power supply system,whichincludes the ac supply system and dc traction power distribution systems, with operating vehicles as dynamicloads, and station auxiliary loads as static loads. The study results normally include distribution system volt-ages, currents,incoming power supply characteristics, available short-circuit current from the power supplyat different nodes of the substation equipment, system X/R ratio, harmonic spectrum, voltage drop, voltageregulation, substation power demand requirements,substation spacing, and energy consumption.
traction power rectifier transformer: A rectifier transformer that supplies ac power to dc rectifiers, whichsupply traction power to dc rail equipment or rolling stock through uncontrolled or controlled rectifiers.
4. Service conditions
4.1 Usual service conditions Usual service conditions shall be as defned in IEEE Std C57.12.00 for liquid-immersed rectifer transformers and IEEE Std C57.12.01 for dry-type rectifer transformers, except where clearly not applicable to traction rectifer transformers or where otherwise specifed herein. 8
4.1.1 Fluctuating loads Traction power rectifer transformers operate under rapidly changing and fuctuating loads, including short circuits, which are typical of traction power systems.
4.1.2 Short circuits Traction power systems can experience a high number of short circuits while in operation, and transform- ers may be exposed to currents that are 10 to 20 times their rated current. During a short-circuit event, large pulsating mechanical forces will act on the windings and their supports during the passage of these currents. Short circuits will also cause high current densities in the windings and impose a rapid increase in winding temperature. As a result, the specifcation of short-circuit impedance is an important factor in the design of the transformer as the impedance will dictate the magnitude of the fault current and its effects during a short. For transformers with lower short-circuit impedances (less than 6%), the short-circuit current and associated mechanical forces would be higher still.
4.1.3 Voltage and current harmonics Harmonic considerations shall be made for traction power rectifer transformers that supply non-sinusoidal power to operating loads. Transformers shall operate within the specifed limits of voltage and current har- monics as specifed by the owner or within the levels specifed in IEEE Std C57.18.10 and IEEE Std C57.110 as a minimum. This is especially true for controlled rectifers, which contribute a higher magnitude of har- monics compared to uncontrolled rectifers. In either case, the transformer and rectifer should be designed to minimize harmonics.