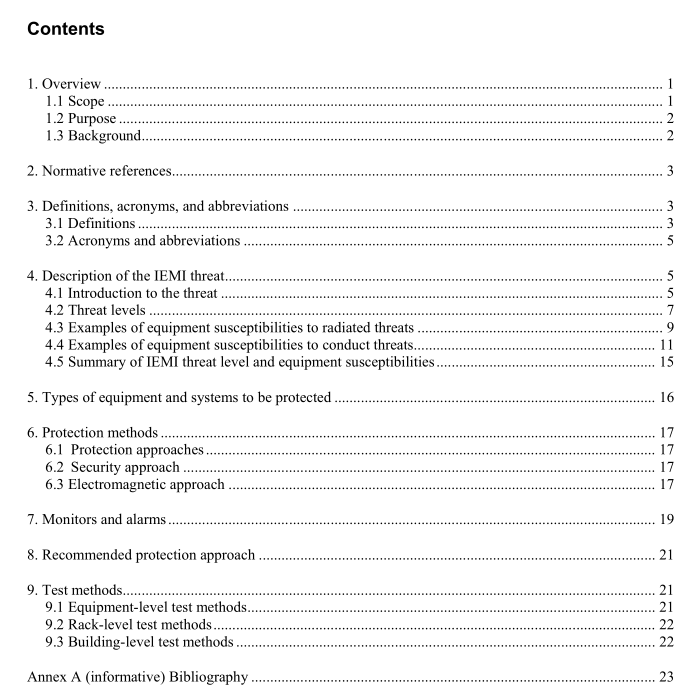 IEEE Std 1642 pdf download IEEE Recommended Practice for Protecting Publicly Accessible Computer Systems from Intentional Electromagnetic Interference (IEMI)
1.3 Background
The term high-power electromagnetics (HPEM) has been used for many years and generally describes a set of transient EM environments where the peak electric and magnetic fields can be very high. The typical environments considered in the past as part of HPEM are the EM fields from nearby lightning strikes, the EM fields near an electrostatic discharge (ESD), the high-altitude electromagnetic pulse (HEMP) created by nuclear bursts, and the EM fields created by radar systems.
The EMC Society of the IEEE’s Technical Committee 5 (TC-5), “High Power Electromagnetics,” deals with all of these subjects. In addition, the International Electrotechnical Commission (IEC) is active in developing standards for commercial equipment and systems under Subcommittee 77C, “High power transient phenomena.” In the past 15 years, two new terms have arisen in the EMC field: EM terrorism [B5] 1 and intentional electromagnetic interference (IEMI) [B30]. In recent years, the scientific community has agreed to utilize the more generic term, IEMI, which includes EM terrorism. In February 1999 at a workshop held at the Zurich EMC symposium, the currently accepted definition for IEMI was suggested: “Intentional malicious generation of electromagnetic energy introducing noise or signals into electric and electronic systems, thus disrupting, confusing or damaging these systems for terrorist or criminal purposes” [B41].
It is noted that hackers are not mentioned explicitly in this definition, although in most countries of the world, an attack on commercial interests for entertainment purposes is against the law. While the motives of the attackers may vary, the results can be the same for civil society. The scientific community has been working for many years to understand this threat and to provide useful guidance on protection. While there has not been much publicity concerning this threat, five reported criminal usages of EM weapons have been found in the following literature:
a) In The Netherlands, an individual disrupted a local bank’s computer network because he was refused a loan. Type of crime: blackmail/criminal damage [B9].
b) In Japan, two Yakuza criminals were caught using an EM disruptor on a Pachinko (gaming) machine to trigger a false win. Type of crime: robbery [B9].
c) In St. Petersburg, Russia, a criminal used an EM disruptor to disable a security system on a jewelry store, so that he could commit a robbery. Type of crime: robbery [B37].
d) In London, a city bank was the target of blackmail attempt whereby the use of EM disruptors was threatened to be used against the bank’s systems. Type of crime: blackmail [B39].
e) In Moscow, Russia, a telecommunications center was targeted and was put out of commission for 24 hours, denying service to 200 000 customers. Type of crime: blackmail/criminal damage [B37]. IEMI threats and protection methods have been evaluated in technical conferences throughout the world, and occasional articles have been published in the popular press, in the U. S. Congressional Record, and also by the IEC dealing with the threat of IEMI to civil society (see [B16], [B23], [B32], [B35], [B36] [B39], and [B40]). While well-documented cases of criminal attacks using IEMI have been difficult to obtain due to the sensitivity of security threats, it is clear from laboratory experiments performed by scientists that it is not difficult to create malfunctions in electronic equipment that is not protected from this threat. It is important to recognize that a special issue of IEEE Transactions on Electromagnetic Compatibility devoted to HPEM and IEMI [B38] was produced in 2004 (hereafter referred to as “the 2004 Special Issue”), summarizing many years of work. This was preceded by two related special issues of these transactions covering the nuclear electromagnetic pulse in 1978 [B20] and high-power microwaves (HPM) in 1992 [B21].
It is clear that many EM models and codes developed in the past to deal with the intense, high-frequency portion of the electromagnetic pulse and the high levels of fields associated with HPM are relevant to the new field of IEMI. This is because the analysis of transient, high-frequency, time-domain EM fields, their coupling to electronic systems, and the protection of equipment and systems from these environments require an understanding of both time-dependent and non-linear aspects, factors not always present in the routine treatment of EMC.