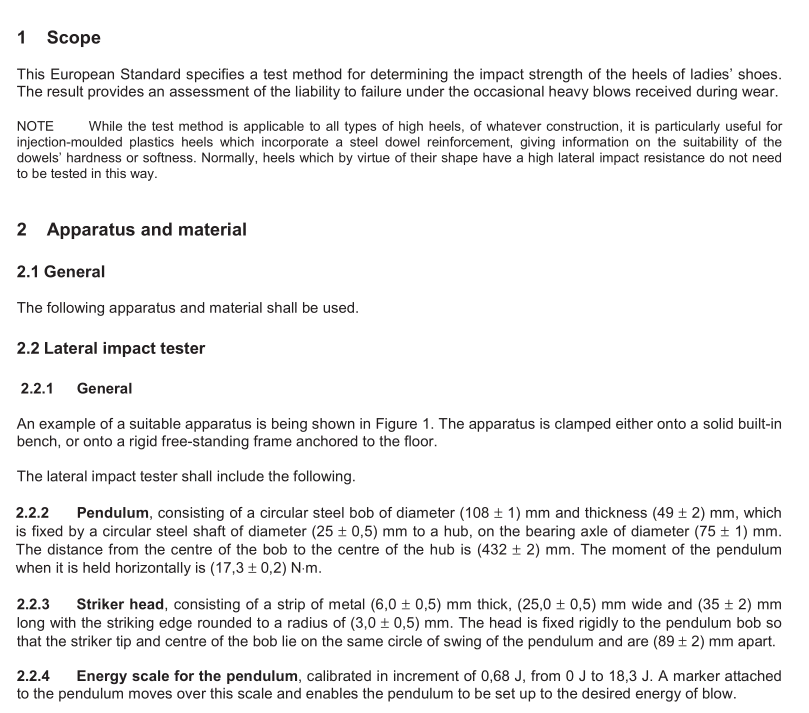 BS EN ISO 19953 pdf download Footwear — Test methods for heels — Resistance to lateral impact
1 Scope
This European Standard specifies a test method for determining the impact strength of the heels of ladies’ shoes.The result provides an assessment of the liability to failure under the occasional heavy blows received during wear.
NOTE While the test method is applicable to all types of high heels, of whatever construction, it is particularly useful forinjection-moulded plastics heels which incorporate a steel dowel reinforcement, giving information on the suitability of thedowels’ hardness or softness. Normally, heels which by virtue of their shape have a high lateral impact resistance do not needto be tested in this way.
2Apparatus and material2.1 General
The following apparatus and material shall be used.
2.2 Lateral impact tester
2.2.1 General
An example of a suitable apparatus is being shown in Figure 1.The apparatus is clamped either onto a solid built-inbench,or onto a rigid free-standing frame anchored to the floor.
The lateral impact tester shall include the following.
2.2.2 Pendulum, consisting of a circular steel bob of diameter (108 ±1) mm and thickness (49±2) mm, whichis fixed by a circular steel shaft of diameter (25±0,5) mm to a hub, on the bearing axle of diameter (75± 1) mm.The distance from the centre of the bob to the centre of the hub is (432± 2) mm.The moment of the pendulumwhen it is held horizontally is (17,3土0,2) N-m.
2.2.3 Striker head, consisting of a strip of metal (6,0±0,5) mm thick,(25,0 ±0,5) mm wide and (35± 2) mmlong with the striking edge rounded to a radius of (3,0 ±0,5) mm.The head is fixed rigidly to the pendulum bob sothat the striker tip and centre of the bob lie on the same circle of swing of the pendulum and are (89 ± 2)mm apart.2.2.4 Energy scale for the pendulum, calibrated in increment of 0,68 J , from O J to 18,3 J.A marker attachedto the pendulum moves over this scale and enables the pendulum to be set up to the desired energy of blow.
2.2.5 Base clamp, for holding the metal mounting tray (3.2) and for adjusting it vertically and horizontally toachieve correct allignment of the heel tip.
NOTE lf the apparatus is not firmly mounted there is partial loss of energy on impact, thereby producing false results.
2.4 Metal alloy
Melting point between 100° C and 150°c.
3 Sampling and conditioning
3.1Take free heels and set each heel in a dry metal mounting tray (3.2), using the procedure described in 3.2 or,for very short heel (usually those below 40 mm in height), the procedure described in 3.3, to obtain a test specimenassembly.
3.2 Place the heel centrally in the tray so that the seat breast edge is against a flat end of the tray and the heeltip points upwards (see Figure 2).Heat the metal alloy (3.3) until it is at the lowest temperature at which it will flowinto all parts of the tray, filing the space around the heel to within 3 mm from the top. Allow the alloy to cool and setthereby providing a rigid mounting for the heel.
3.3 Since some very short heels cannot be struck correctly by the striker if mounted in accordance wit 4.2(because the bottom of the pendulum catches the base clump assembly), a different method of mounting isnecessary. In such cases mount the heel with the rear of the heel seat against a flat end of the tray. Cut a smallamount from the rear of the heel so as to set the heel further towards the rear of the mounting tray if this allows thestriker to strike the heel correctly.
4Test method
4.1 Principle
A heel, clamped with the tip uppermost and the stem approximately vertical, is subjected repeatedly to measuredblows from a pendulum striker, the energy of the blows increasing successively until the heel fails.
4.2 Procedure
4.2.1 Position the test specimen assembly in the lateral impact tester (2.2) sliding the assembly up the inclinedplane of the base clamp (2.1.5) as far as possible and locking into position with the back of the heel facing thependulum.Set the test specimen assembly at a suitable angle to the horizontal so that the blow will be applied atright angles to the heel stem. Adjust the clamp so that the heel just contacts the striker when the pendulum isvertical, with the tip of the heel 6 mm above the striker tip.
4.2.2 Lift the pendulum to the 0,68 J position and release, so that the striker (2.1.3) falls against the heel stem.Catch the pendulum on its rebound to prevent a second blow. Repeat this procedure, increasing the impact energyat each blow by 0,68 J either until the heel stem breaks, until it bends and the pendulum jams, or until an impactenergy of 18,3 J has been applied.Record total number of blows delivered.
4.2.3 Damage involving fracture or cracking of the heel at the point of impact of the striker is regarded as invalidin this test, since it is due to the effect of the striker acting as a chisel rather than fracture of the heel due to impactof the heel as in wear. If such damage occurs, report it together with this explanation.
4.2.4 Repeat the test with the other two test specimen assemblies by following the same procedure.
5Expression of results
Express the result for each test specimen assembly as follows:
a) the number of blows to failure (or that no failure occurred after 27 blows) and the energy, in J , of the last blow;b) the type of failure, as described in 4.2.2, or the fact that damage involving fracture or cracking of the heel at the
point of the impact occurred, as described in 4.2.3.