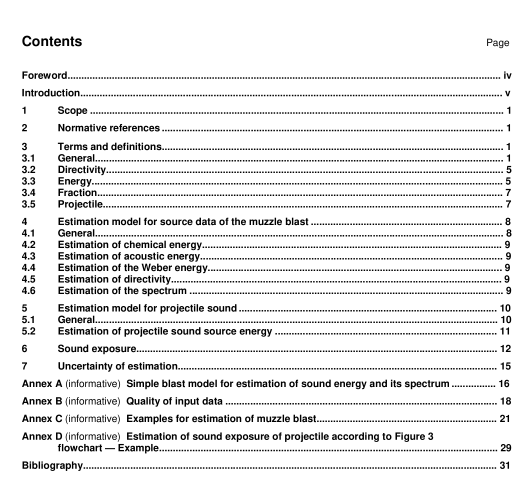 BS EN ISO 17201-2 pdf download Acoustics — Noise from shooting ranges — Part 2: Estimation of muzzle blast and projectile sound by calculation
This part of lSO 17201 specifies methods for estimating the acoustic source data of muzzle blast andexplosions and the source data of projectile sound on the basis of non-acoustic data for firearms with calibresless than 20 mm and explosions less than 50 g TNT equivalent.
This part of lSO 17201 addresses those cases where no source measurements exist or where the datanecessary to calculate projectile sound according to lS0 17201-4 are unknown. An example of this situationwould be measuring projectile sound from shot guns pellets. This part of lSO 17201 can also be used as aninterpolation method between measurements of muzzle blast.
Source data are given in terms of spectral angular source energy covering the frequency range from 12,5 Hzto 10 kHz and can be used as data input for sound propagation calculation.
This part of lSO 17201 is not applicable to the prediction of sound levels for the assessment of hearingdamage and cannot be used to predict sound pressure levels or sound exposure levels below a specificdistance where linear acoustics does not apply.
2Normative references
The following referenced documents are indispensable for the application of this document. For datedreferences,only the edition cited applies.For undated references,the latest edition of the referenceddocument (including any amendments) applies.
ISO 17201-1:2005，Acoustics — Noise from shooting ranges — Part 1: Determination of muzzle blast bymeasurement
ISO 17201-4,Acoustics —Noise from shooting ranges — Part 4: Prediction of projectile sound
3Terms and definitions
For the purposes of this document, the terms and definitions given in lSO 17201-1 and the following apply.
3.1General
3.1.1
air density
density of air for the estimation conditions
NOTE The air density is expressed in kilograms per cubic metre (kg/m3).
3.1.2
angular frequencyw
frequency multiplied by 2n
NOTE The angular frequency is expressed in radians per second (rad/s) in all formulae.3.1.3
coordinate system (x, y)
plane coordinate system describing geometry, where the x-axis denotes the line of fire with x = 0 at the muzzle,and the y-axis measures the perpendicular distance from the line of fire in any plane around the line of fireNOTE1 The sound field of projectile sound is rotational symmetric around the line of fire.
NOTE2 The coordinates are given in metres (m).
3.1.4
cosine-coefficients1,2…N
coefficients of the cosine-transform used to describe the directivity of the angular source energy
3.1.5
deceleration angleE
difference between the radiation angle at the beginning and end of a part of the trajectoryNOTE The deceleration angle is expressed in radians (rad) in all formulae.
3.1.6
specific chemical energyu
specific chemical energy content of the propellant
NOTE The specific chemical energy is usually expressed in joules per kilogram (J/kg)3.1.7
line of fire
continuation of the axis of the barrelSee Figure 1.
NOTE Ballistic trajectories can be described as a sequence of straight lines. Then the methods apply to eachsegment.Corrections of the aiming device are ignored.