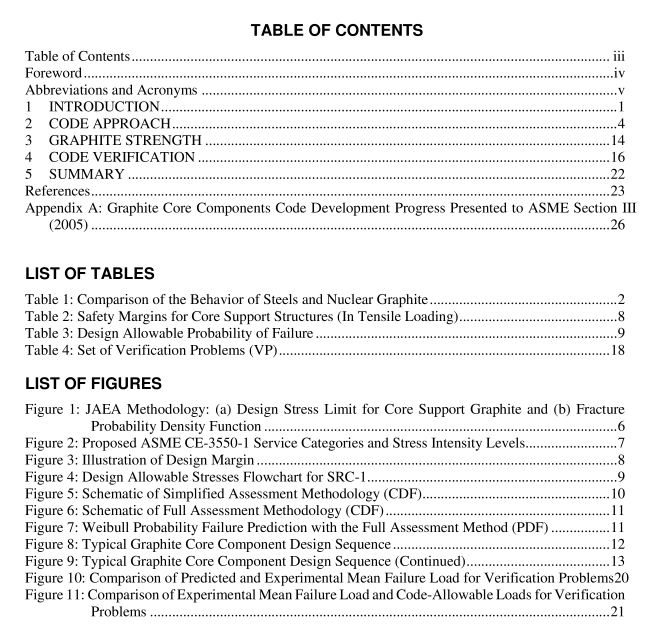 ASME NTB-4 pdf download Background Information for Addressing Adequacy or Optimization of ASME BPVC Section III, Division 5 Rules for Nonmetallic Core Components
2 CODE APPROACH This section provides the basis for the code and a typical design sequence for a graphite core component. Because there is not a standardized graphite grade for nuclear applications, the code places the responsibility for determining the design properties of the graphite used on the core designer.
The approved properties for the selected graphite grade are then determined through material testing and listed in the form of a materials data sheet [4]-[6], which is used to justify the design. Previous studies [7], [8] determined that variations of the Weibull distribution best describe the graphite reliability curve. HHA-II-3000 [9] describes how to statistically characterize graphite material based on specimen test results so that a material reliability curve can be derived. The approach is supported by many other studies [10]-[17].
To perform a stress-based analysis, the rules derive an equivalent stress state (from a multiaxial stress analysis) to determine the peak equivalent stress for a component for a given load condition. In general, parts are designed by comparing calculated stresses to strength limits based on specimen test results and adequate design margins. But in the case of graphite, fixed design margins do not ensure uniform reliability because of the variability in the material. The stochastic strength (large random fluctuations from the population mean) and the nonlinear stress-strain response (quasi-brittle) of graphite [18], as well as billet-to-billet variation [19], require that the material be statistically characterized.
That characterization is then used to determine the design margin [20], [21]. The identified modes of failure for graphite are brittle fracture, fatigue, excessive deformation (including both elastic instability and irradiation-induced dimensional changes) and environmental effects such as irradiation and chemical attack. The following are fundamental concepts for the code approach.  It is possible to allocate probability-of-failure (POF) targets to the graphite parts such that if the targets are met, the overall functional integrity of the assembly is ensured.
The effects of loads on a part can be calculated and expressed as stress states in the part. Complex stress states can be reduced to an equivalent stress, which is equivalent to uniaxial stresses applied to test specimens.
The nature of graphite implies that a probabilistic assessment method is better suited to the design of graphite parts than is a deterministic method.
It is possible to characterize the materials by a statistical treatment of the material specimen test results to produce a statistical distribution (referred to as the material reliability curve) and generate confidence intervals to ensure conservatism.
To ensure margin against brittle fracture, for a simple assessment, it is possible to determine stress values — based on the POF targets and material test data — so that when the part stresses are lower than these limits, adequate reliability of the part is ensured. For a full assessment, it is possible to calculate expected POF values for a graphite part based on material test data that are directly comparable to the POF targets and ensure adequate reliability of the part.
Environmental effects such as irradiation and oxidation can be incorporated into the method by considering the changes to the input material properties.
To ensure the margin against fatigue fracture, the code requires protection against fatigue failure; but it does not specifically address guidance regarding failure of graphite parts due to fatigue- induced damage for the major operating cycles of the reactor (HHA-3144) [22].
The graphite code treats design, service, and test loadings consistently with the rest of the ASME BPVC. The design loadings, defined in HHA-3123.1 through HHA-3123.4 [22], include the distributions of pressure, temperature, fast neutron flux or damage dose rate, and various forces applicable to nonmetallic core components. According to HAB-2142 [23], the design specification defines the design limits (the enveloping case for the design) and service limits according to the designer’s classification with regard to functional performance (Level A); the ability to withstand damage requiring repair (Level B); and the extent to which large deformations in the areas of structural discontinuity (Level C) and gross deformations with consequential loss of dimensional stability and damage requiring repair (Level D) are permitted.