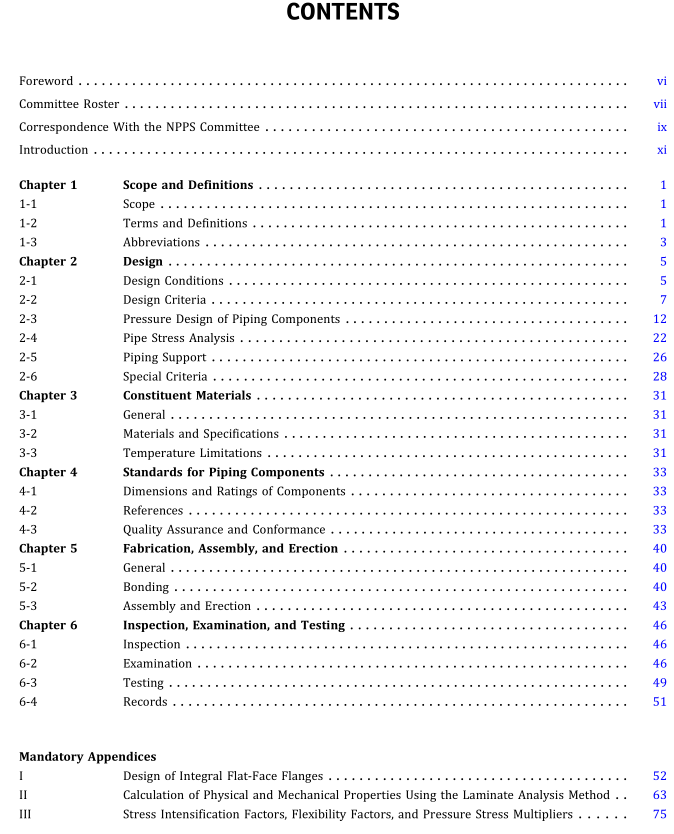 ASME NM.2 pdf download Glass-Fiber-Reinforced Thermosetting-Resin Piping Systems ASME Standards for Nonmetallic Pressure Piping Systems
(a) the length of twist produced by stranding filaments,such as fibers, wires, or roving; length oftwist of a filamentis usually measured as the distance parallel to the axis ofthe strand between successive turns of the filament.(b) the angle that such filaments make with the axis ofthe strand during a stranding operation.
lay up’: in reinforced plastics, to assemble layers of resin-impregnated material for processing.
lay-up’: in reinforced plastics,an assembly of layers ofresin-impregnated material ready for processing.
NOTE: Within this Standard, the noun lay-up is hyphenated todifferentiate it from the verb lay up.
liner: see corrosion barrier.
listed components: piping components manufactured inaccordancewith thespecifications listed inTable 4-1.1-1.
long-term hydrostatic pressure (LTHP): the estimatedinternal pressure of the piping product that, whenapplied continuously in accordance with ASTM D2992,Procedure B, will cause failure of the product after a speci-fied number of hours.The specified number of hours andthe extrapolation of failure results out to the specifiednumber of hours are the same as for the long-term hydro-static strength.
long-term hydrostatic strength (LTHS): the hoop stressthat when applied continuously is calculated to causethe failure of the pipe in a specified number of hours,as set by the product standard. These strengths areusually obtained by extrapolation of log-log regressionequations or plots of actual failure times for a range ofstresses out to the selected interval.
pressure design basis (PDB): an internal pressure devel-oped for a fiberglass piping product and multiplied bya service (design) factor to obtain a hydrostatic designpressure.The PDB is the long-term hydrostatic pressure
determined in accordancengwtitrmaostatic pressureD2992 allows the long-term hydrostatic pressure to be
obtained on a cyclic stress (Procedure A) or constantstress (Procedure B) basis.
pressure rating (PR): the estimated maximum pressure ina piping component that can be exerted continuously witha high degree of certainty that failure of the piping compo-nent will not occur.
Procedure Qualification Record (PQR): a record of thebonding data used to bond a test piece. The PQR is arecord of variables recorded during the bonding of thetest pieces. lt also contains the test results of thetested specimens. Recorded variables normally fallwithin a small range of the actual variables that willbe used in production bonding.
reinforced thermosetresin pipe: a term used synonymouslywith FRP pipe.
reinforcement3: glass fibers having the form of choppedroving. continuous roving. fabric,or chopped-strandmat. These fibers are added to the resin matrix tostrengthen and improve the properties of the resin.resin3: the matrix of the laminate.
restrained piping system: a piping system or portionthereof that includes no changes in direction and isrestrained from axial movement.
service (design) factor: a number not greater than 1.0 thatis multiplied by the long-term hydrostatic strength (orlong-term hydrostatic pressure) to obtain the hydrostaticdesign stress (or hydrostatic design pressure].The factormay vary depending on the service conditions, hazard,length of service desired, and properties of the pipe.stiffness factor*: the measurement of a pipe’s ability toresist deflection,as determined in accordance withASTM D2412.
surfacing veil: a thin mat of fine fibers used primarily toproduce a smooth surface on a reinforced plastic.
thermoset resin: a plastic that, after having been cured byheat or other means, is substantially infusible and inso-luble.
thermosetting: capable of being changed into a substan-tially infusible or insoluble product when cured by heat orother means.
thixotropic agent: a material added to resin to impart highstatic shear strength (viscosity) while retaining the resin’slow dynamic shear strength.
trim piping: piping that is attached to vessels or equip-ment,such as, but not limited to, overflows, vents, anddrains.
ultraviolet absorber: a material that when combined in aresin mixture will selectively absorb ultraviolet radiation.unlisted components: piping components not manufac-tured in accordance with the specifications listed inTable 4-1.1-1.
woven roving: a glass-fiber fabric-reinforcing materialmade by the weaving of glass-fiber roving.