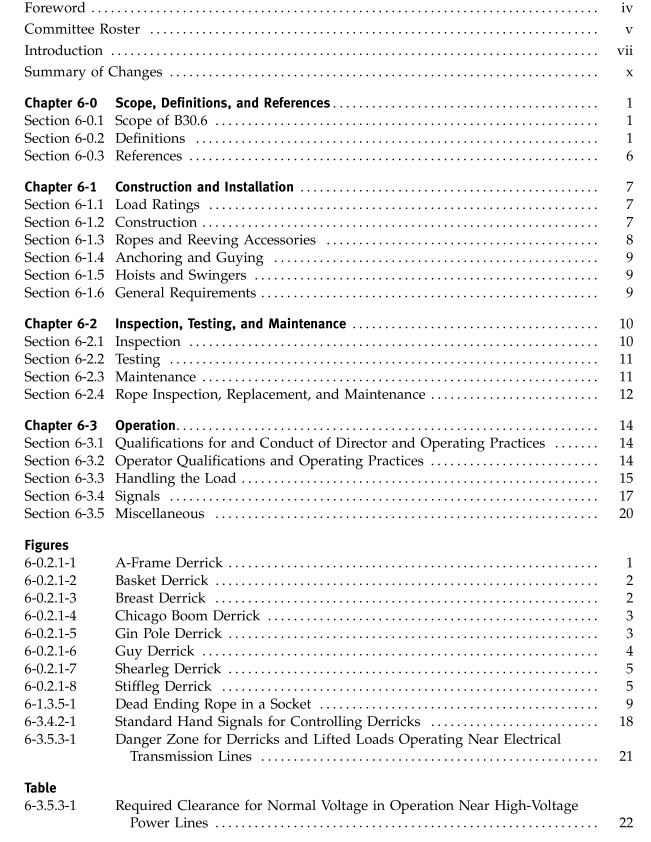 ASME B30.6 pdf download Derricks Safety Standard for Cableways, Cranes, Derricks, Hoists, Hooks, Jacks, and Slings
SECTION 6-0.1: SCOPE OF B30.6 Volume B30.6 includes provisions that apply to the construction, installation, operation, inspection, testing, and maintenance of guy, stiffleg, basket, breast, gin pole, Chicago boom, shearleg, and A-frame derricks. These derricks, powered by hoists through systems of wire rope reeving, are used for lifting, lowering, and hori- zontal movement of freely suspended unguided loads. Derricks are usually stationary mounted and may be temporarily or permanently installed. The provisions included in this Volume also apply to any variations of these types of derricks with the same fundamental characteristics, except those specified for floating der- ricks in ASME B30.8, Floating Cranes and Floating Derricks.
SECTION 6-0.2: DEFINITIONS
6-0.2.1 Types of Equipment derrick: an apparatus consisting of a mast or equivalent member held at the end by guys or braces, with or without a boom, for use with a hoisting mechanism and operating ropes. derrick, A-frame: a derrick in which the boom is hinged from a cross member or pedestal between the bottom ends of two upright members spread apart at the lower ends and joined at the top, the boom point is secured to the junction of the side members, and the side mem- bers are braced or guyed from this junction point (see Fig. 6-0.2.1-1). derrick, basket: a derrick without a boom, similar to a gin pole, with its base supported by ropes attached to corner posts or other parts of the structure. The base is at a lower elevation than its supports. The location of the base of a basket derrick can be changed by varying the lengthofthe ropesupports. The top ofthe pole is secured with multiple reeved guys to position the top of the pole to the desired location by varying the length of the upper guy lines. The load is lifted and lowered by ropes through a sheave or block secured to the top of the pole (see Fig. 6-0.2.1-2).
derrick, breast: a derrick without a boom. The mast con- sists of two side members spread farther apart at the base than at the top, and tied together at the top and bottom by rigid members. The mast is prevented from tipping forward by guys connected to its top. The load is lifted and lowered by ropes through a sheave or block secured to the top of the crosspiece (see Fig. 6-0.2.1-3). derrick, Chicago boom: a boom that is attached to a struc- ture, an outside upright member of the host structure serving as the mast, and the boom being mounted in a pivoting seat secured to the upright. The derrick is complete with load, boom, and boom point swing line falls (see Fig. 6-0.2.1-4).
derrick, gin pole: a boom without a mast that has guys arranged from its top to permit leaning the mast in one or more directions. The load is lifted and lowered by ropes reeved through sheaves or blocks at the top of the mast and the lower block (see Fig. 6-0.2.1-5). derrick, guy: a fixed derrick consisting of a mast capable of being rotated 360 deg, but not continuous rotation, supported in a vertical position by guys and a boom, the bottom end of which is hinged or pivoted to move in a vertical plane with a reeved rope between the head of the mast and the boom harness for lifting and low- ering the boom, and a reeved rope from the boom point for lifting and lowering the load (see Fig. 6-0.2.1-6).