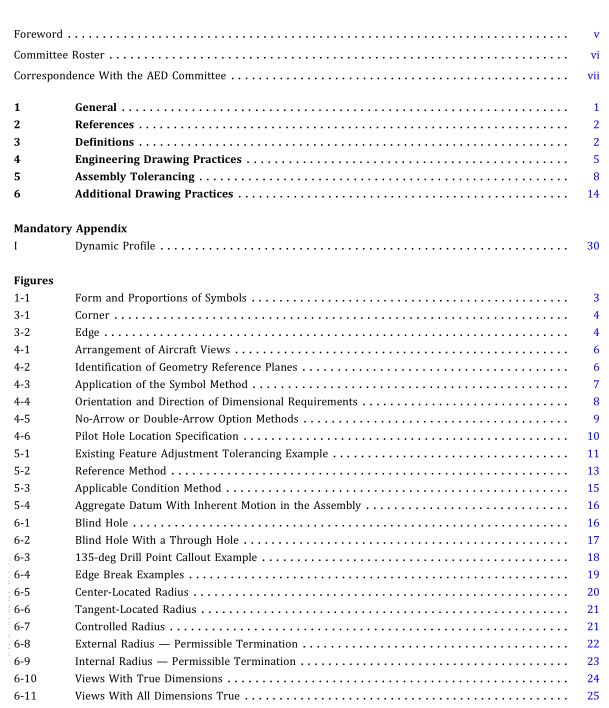 ASME AED-1 pdf download Aerospace and Advanced Engineering Drawings
This Standard provides a method to document requirements that are common across aerospace and other industriesthat use advancedmanufacturing technologies.This Standard offers symbologies,terminologies,and conceptsto enhancethe understanding and abilities of those who create and use design documentation.
1.2 Conventions
The conventions in paras. 1.2.1 through 1.2.10 are used in this Standard. With the exception of the system of unitsdescribed in para. 1.2.7, these conventions are similar to the conventions used in the ASME Y14 standards.
1.2.1 Mandatory,Nonmandatory,Guidance, and Optional Words
(a) The words “shall” and “will” establish a mandatory requirement.(b) The words “should” and “may” establish a recommended practice.
(c) The words “typical,””example,””for reference” and the Latin abbreviation “e.g” indicate suggestions given forguidance only.
(d) The word “or”used in conjunction with a mandatory requirement or a recommended practice indicates that thereare two or more options on how to comply with the stated requirement.
1.2.2 Cross-Reference of Standards. Cross-reference of standards in text with or without a date following the stan-dard designator shall be interpreted as follows:
(a) Reference to ASMEY14 standards in the text without a date following the standard designator indicates that the issue of the standard identified in the References section (section 2) shall be used to meet the requirement.
(b) Reference to ASMEY14 standards in the text with a date following the standard designator indicates that only that issue of the standard shall be used to meet the requirement.
1.2.3 Invocation of Referenced Standards.The following examples define the invocation of a standard when specifiedin the References section(section 2) and referenced in the text of this Standard:
(a) when a reference standard is cited in the text with no limitations to a specific subject or paragraph(s) of thestandard, the entire standard is invoked, e.g.”Dimensioning and tolerancing shall be in accordance with ASMEY14.5″ isinvoking the complete standard because the subject of the standard is dimensioning and tolerancing and no specificsubject or paragraph(s) within the standard are invoked.
(b) When a referenced standardis cited in the text with limitations to a specificsubject orparagraph(s)ofthe standard.only the paragraph(s) on that subject are invoked, e.g.,，”Assign part or identifying numbers in accordance with ASMEY14.100” is invoking only the paragraph(s) on part or identifying numbers because the subject of the standard is engi-neering drawing practices, and part or identifying numbers is a specific subject within the standard.
(c) When a reference standard is cited in the text without an invoking statement such as “in accordance with” thestandard is for guidance only e.g.”For gaging principles,see ASME Y14.43″ is for guidance only, and no portion of thestandard is invoked.
1.2.4 Parentheses Following a Definition.When a definition is followed by a standard referenced in parentheses,thestandard referenced in parentheses is the source for the definition.
1.2.5 Notes.Notes depicted in this Standard in ALLUPPERCASEletters are intended to reflect actual drawingentries.Notes depicted in initial uppercase or lowercase letters are to be considered supporting data to the contents of thisStandard and are not intended for literal entry on drawings.A statement requiringthe addition of a note with the qualifier”such as” is a requirement to add a note, and the content of the text is allowed to vary to suit the application.
1.2.6 Acronyms and Abbreviations.Acronyms and abbreviations are spelled out the first time used in this Standard,followed by the acronym or abbreviation in parentheses.The acronym or abbreviation is used thereafter throughout thetext.
1.2.7 Units. U.S.Customary units are featured in this Standard.Itshould be understood thatthe InternationalSystem ofUnits (Sl) could equally have been used without prejudice to the principles established.
1.2.8 Figures. The figures in this Standard are intended only as illustrations to aid the user in understanding the practices described in the text. In some cases, figures showa level ofdetail as needed foremphasis. In othercases, figures are incomplete by intent so as to illustrate a concept or facet thereof. The absence of figure(s) has no bearing on the applicability ofthe stated requirements or practice. To comply with the requirements ofthis Standard, actual data sets shall meetthe contentrequirements setforth in the text. To assistthe userofthis Standard, a listofthe paragraph(s) that refertoanillustrationappearsinthelowerright-handcornerofeachfigure.This listmaynotbeall-inclusive.Theabsence of a list is not a reason to assume inapplicability. A lowercase “h” is used in figures for letter height or for symbol proportions (see Figure 1-1). Select the applicable letter height in accordance with ASME Y14.2.