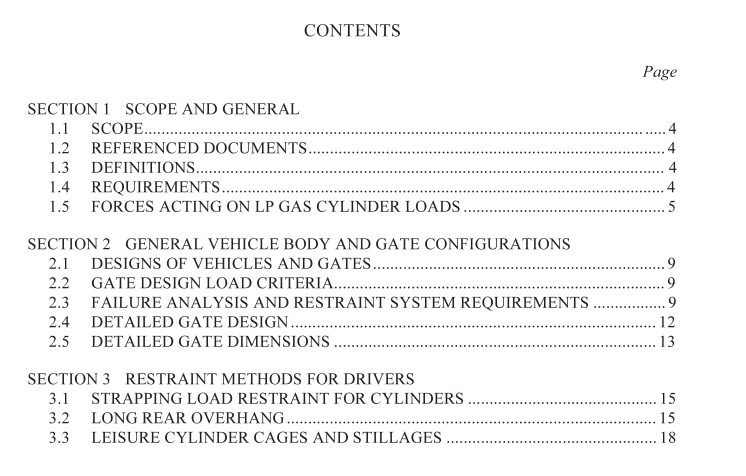 AS 5714 pdf download – Load restraint for LP Gas cylinder distribution
1.1 sCOPE
This Standard specifies requirements and recommendations for the design and constructionof load restraint systems for typical LP Gas cylinder loads to prevent loss of the load ormovement of the LP Gas cylinders that affects stability of the vehicle. The requirementsfacilitate conformance with the requirements of the National Transport Commission’s LoadRestraint Guide to the transport of LP Gas cylinders.
1.2 REFERENCED DOCUMENTS
The following documents are referred to in this Australian Standard:AS/NZS
1596The storage and handling of LP GasNational Transport Commission (NTC)
Load Restraint Guide
1.3 DEFINITIONS
For the purpose of this Standard，the definitions given in AS/NZS 1596 and the LoadRestraint Guide 2004 apply.
1.4 REQUIREMENTS
1.4.1 General load restraint performance requirement
Loads shall be restrained to prevent unacceptable movement during all normal conditions ofon road operation. The load restraint system shall, therefore，satisfy the followingrequirements:
(a) The load shall not become dislodged from the vehicle.(b)Cylinders shall be restrained to remain upright.
(c) Any load movement shall be limited,such that in all cases where movement occurs,
the vehicle’s stability and weight distribution are not adversely affected.
Loads that are permitted to move relative to the vehicle include loads that areeffectively contained within the sides or enclosure of the vehicle body,such as loadsthat are restrained from moving horizontally. Limited vertical movement ispermissible.Also see Clause 3.1.1.
To achieve this，the load restraint system shall be capable of withstanding the forces(see Figure 1.1) that would result if the laden vehicle were subjected to each of thefollowing separately:
(i)0.8g deceleration in a forward direction.
(ii)0.5g deceleration in a rearward direction.
(iii) 0.5g acceleration in a lateral direction.
(iv) 0.2g acceleration relative to the load in a vertical direction.
NOTE: g is the acceleration due to gravity.
1.4.2 General requirements for load restraint
Every load shall be restrained to prevent unacceptable movement during all expected conditions of operation. The load restraint system shall meet the performance requirements detailed in Clause 1.4.
NOTE: Figure 1.1 shows typical road restraint forces.
1.4.3 Means of restraint
The primary means of restraint is achieved by the use of strapping, wrapping or mechanicalrestraints.
The secondary means of restraint is achieved by the use of gates, fixed side panels, stillagesor cages constructed to provide adequate strength to contain a load of filled cylinders.
NOTE: This is important where the gate is at the rear and vertical forces when driving over abump may dislodge the gate.
To satisfy the above requirements, the gates shall—(a)be tied down;
(b)have a locking device fitted that positively affixes the gates to the tray; or(c)be hinged and permanently fixed to the tray.
1.5 FORCES ACTING ON LP GAs CYLINDER LOADS1.5.1 General
The loads and modes of failure include the following:
(a)Cylinders sliding sideways when the vehicle is subjected to a lateral acceleration of 0.5g.
(b)Cylinders tipping over sideways when the vehicle is subjected to a lateral acceleration of 0.5g.
(c) Cylinders thrown upwards when the truck drives over a speed bump or similar givinga vertical acceleration of 0.2g.
(d) Cylinders bending or shearing the headboard when the vehicle is subject to a brakingdeceleration of 0.8g.
1.5.2 Tipping versus sliding—Single cylinder Where a cylinder is subject to decelerations of 0.5g or 0.8g, a force is generated through the centre of mass and will result in either the cylinder sliding across the surface or tipping over. The relevant forces are shown in Figure 1.2. With a very low friction surface, all objects will tend to slide rather than tip. With a very high friction surface, almost all objects will tend to tip rather than slide. Depending on the geometry of an object, there is a friction factor below which the object will slide, and above which the object will tip. Table 1.1 gives the relevant values for the typical range of cylinders. Table 1.1 shows the values when the LP Gas cylinders are full.