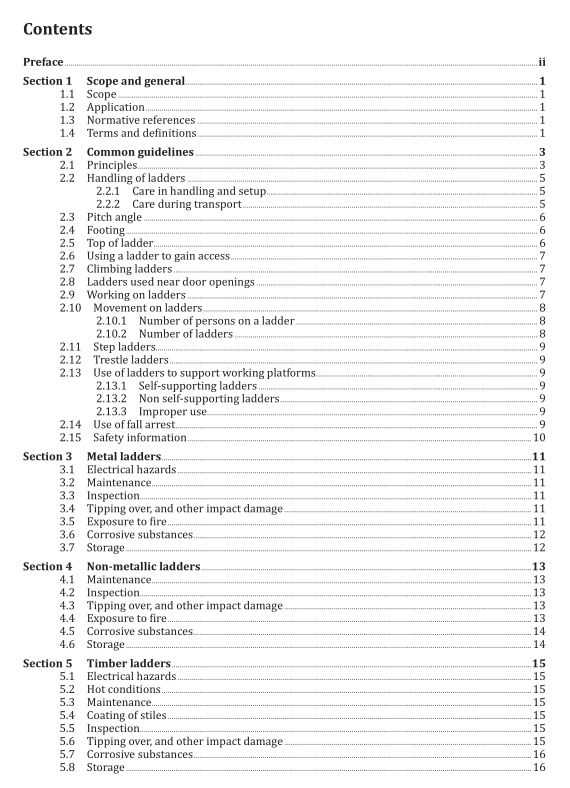 AS 1892.5 pdf download – Portable ladders Part 5: Selection, safe use and care
The top of the ladder should not be supported by the rungs. Where the top of the ladder is to besupported against a pole, tree or similar structure that may result in rung loading, it should be fittedwith a pole chain, strap, hoop or other suitable device to transfer the support load to the stiles.
The top of the ladder should be secured in position as soon as is practicable before use.
NOTE2 Care is needed when securing the top of an extension ladder with clutches that rely on gravity acting onthe upper section(s) of the ladder to keep the clutch mechanism engaged.Ilf the support at the top of the ladder isable to move as the user’s weight moves up the ladder, the top ladder section can be pulled away from the bottomsection and the clutch may separate from the rungs, potentially disengaging and causing the ladder to drop downto a lower clutch engagement position.This may cause the ladder to lose connection with the support.Also, insome designs the slide guide connecting the upper and lower ladder sections may fail and allow the ladder tohinge in a scissor action.
NOTE3 Asimilar problem may occur when loweringan extension ladder into a well,cavity or a lower roofsectionwhereby the clutch may fully or partly disengage, resulting in a failure when ascending or descending the ladder.NOTE4 In situations where the bottom and top sections of an extension ladder can move in a way to extend theladder, the clutch engagement may not be reliable.
2.6Using a ladder to gain access
Where a ladder is used to gain access onto a work area or roof, the stiles of the ladder should extendabove the level of the work area or roof by not less than 1 m. The ladder should be secured at the topbefore the user transitions from the ladder onto the working platform or roof to prevent sidewardsslipping or movement away from the top support.
Care should be taken when transitioning between the ladder and the landing as a need to swing aroundthe stile during the transition increases the potential for slipping or falling.
NOTE 1 In some cases, the ladder could be installed so that it can be accessed from the side.
NOTE 2 In some cases, stile extensions could be incorporated to allow the user to pass between the stileswhen transitioning. Where stile extensions are used, the top rung should be level with or immediately below thelanding so as not to create a trip hazard when passing between the stiles.
2.7Climbing ladders
When ascending or descending a ladder, the user should face the ladder and be able to grip the ladderwith both hands. The use of a tool pouch, or similar, should be considered when carrying tools.
Users should have at least one foot and one hand contact with the ladder while ascending or descendingthe ladder. The user should not climb or move laterally from one ladder to another.
NOTE For ladders without stiles (i.e.work platforms), it is not expected that a hand will be used to grip theladder.However, it may be necessary to grip an adjacent structure or object for balance.
2.8 Ladders used near door openings
Where a ladder is to be placed near a doorway, the door should be blocked open, locked closed orremoved.In addition to guarding the door, appropriate warning signs may be placed or erected.
2.9Working on ladders
When working on a ladder,the user should remain centred between the stiles and maintain threepoints of contact.
NOTE 2 Three points of contact are not required for ladders that incorporate a platform specifically designedfor working on, e.g.platform stepladders, work platforms and some step stools.
NOTE3 Examples of working on a ladder include using hand tools and passing objects to a person on the ground.The user should not stand higher than the tread or rung indicated on the ladder as the highest standinglevel.The user should not stand —
(a)
on the top cap or the top tread of a self-supporting ladder;
(b)
above the second top rung of a non-self-supporting ladder; or
(c)
on the rear horizontal braces of a single-sided self-supporting ladder.Ladders should be used for short duration, light duty manual tasks.
NOTE 4 Some tasks using ladders may be considered hazardous manual tasks under WHs legislation (e.g.involving repetitive movement, sustained or awkward postures, sustained or repetitive forces etc).The longeror more repetitive a task the more likely its is to be hazardous, and some ladders may be more ergonomicallysuitable to certain tasks than others. Guidance on managing risks of hazardous manual tasks is not covered inthis Standard but may be found elsewhere e.g. WHS Regulator guidance material.The ladder should be kept closeto the work. The user should keep their centre of mass within the footprint of the ladder and not overreach.Instead, the user should descend and relocate the ladder.A ladder should not be relocated while anyone is on theladder. When using a ladder, the user should not push or pull unless the ladder is properly secured.
When a self-supporting ladder is to be relocated, tools should be removed from the top cap beforemoving the ladder.
Users should not ” walk” the ladder to reposition it. Instead, users should descend and relocate the ladder.Where the ladder incorporates guardrails, users should not stand on these to gain extra height or leanagainst them to gain extra reach.Care should be taken when lifting items over the guardrails as thecombined centre of mass of the user and the item they are holding can extend beyond the footprint ofthe ladder causing it to become unstable.
2.10 Movement on ladders
2.10.1 Number of persons on a ladder
Only one person should be on a ladder at a time. However,emergency conditions may necessitate asecond person being on a ladder.In these circumstances, only one person should move at a time.A non-self-supporting ladder should be inclined to a steeper angle than that recommended in Clause 2.3.Theladder should be lashed in position.