AS 1301.457 pdf download – Methods of test for pulp and paper Method 457: Determination of moisture content in paper, board and pulps 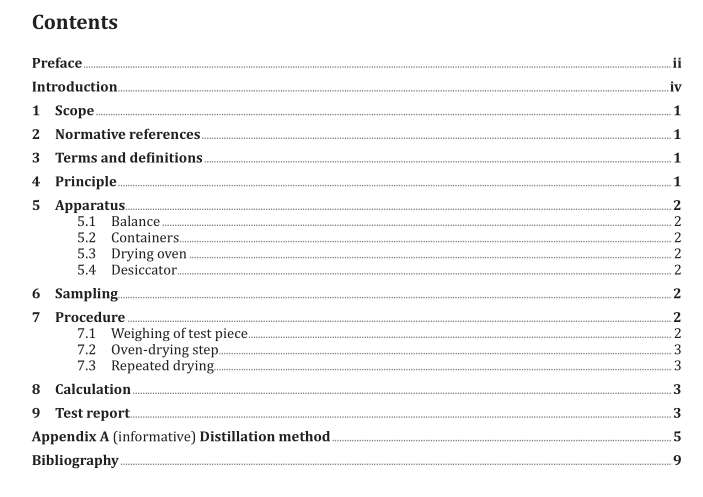 AS 1301.457 pdf download – Methods of test for pulp and paper Method 457: Determination of moisture content in paper, board and pulps
5 Apparatus5.1 Balance
5.2 Containers
二tainers_for Preventing shan. 1.no0rwn.e110t现资
not subject to change under conditions of drying specified in this document. Where test pieces are
taken according to AS/NZS 1301.417s, the containers need to be large enough to contain sheets withoutcutting or tearing them. Before using a container, determine its tare weight.
5.3Drying oven
A drying oven capable of being maintained at an air temperature of 105± 2C in the usable volume andhaving forced ventilation.
5.4Desiccator
A dessicator equipped with freshly dried desiccant.
6 sampling
Take a sample which is representative of the paper, board or pulp the moisture content of which is tobe determined.
Two standard sampling procedures for determining the moisture content of a lot exist, although anyalternative procedure may be followed
NOTE When the purpose is to obtain test pieces from a lot of paper or board,AS/NZS 1301.417s may befollowed. When the purpose is to obtain test pieces from a lot of pulp in bale or roll form, AS/NZS IS0 7213 maybe followed.
Throughout the chosen sampling procedure, minimize the chance of the sampled material losing orgaining moisture in exchange with the ambient air by wrapping the sample.Avoid moisture gain of thesampled material from contact with the skin by wearing gloves.
Take sufficient sample material to ensure that the mass of moisture in a test piece can be determined towithin 0.05 % of the mass of the test piece and so that additional test pieces can be obtained to permitthe performance of replicate measurements if required.Enclose each test piece in a tared dry container(see Clause 5.2).
7Procedure
7.1weighing of test piece
lf the test piece is hot when taken, allow to cool and equalize the air pressures inside and outside thecontainer by momentarily opening and reclosing the lid immediately before weighing. Weigh the testpiece in its container.
7.2oven-drying step
Dry the test piece in the oven, either in its container (with the lid removed), or taken from the containerand spread out to expose the maximum surface area. If the nature of the test piece is such that removalfrom the container could result in fibre or other solids being lost, it shall be dried in the container.
lf the test piece is taken from its container, dry the container and lid under the same conditions.
When the test piece is considered to be completely dry (allow at least one hour), prepare to transfer itto the desiccator. If the test piece has been removed from its container, replace it in the container andfit the lid loosely before the transfer.If the test piece has been in its container during the drying period,fit the lid loosely. The transfer shall be done promptly to minimize exposure of the test piece to theatmosphere outside the oven.
Allow the container to cool in the desiccator.As soon as the container is cool enough so that the potentialreduction of pressure in the container resulting from continued cooling does not risk sucking moisture-laden air into the container, properly fit the lid while still in the desiccator.
Remove the assembled container and its contents from the desiccator and weigh.7.3 Repeated drying
Replace the container and test piece in the oven as described above and dry for a further period of atleast 30 min.Cool and reweigh the container and test piece as described in Clause 7.2.
lf necessary repeat this, until consecutive weighings do not differ by more than 0.1 % of the initialmoist mass of the test piece.
8Calculation
Calculate the percent moisture content from the loss of mass and the original moist mass of the testpiece to the nearest 0.1 % by the following formula:
x _(W -W2)×100
(W1 -Wo)
where
wo= the tared weight of the container as described in Clause 5.2.
w= the weight of the container and test piece before drying as described in Clause 7.1.W= the weight of the container and test piece after drying as described in Clause 7.3.
NOTE In the case of a lot, the precision of results will be affected by variation in moisture content throughoutthe lot being sampled, by the number of test results averaged, by handling and atmospheric exposure and bydrying and weighing errors. The standard deviation of individual moisture tests on replicate test pieces ofconditioned paper tested at the same time is the best indication of drying and weighing errors. This has beenfound to vary from 0.1 % to 0.3 % moisture.

AS 1289.4.4.1 pdf download - Methods of testing soils for engineering purposes Method 4.4.1 : Soil chemical tests— Determination of the electrical resistivity of a soil—Method for sands and granular materials