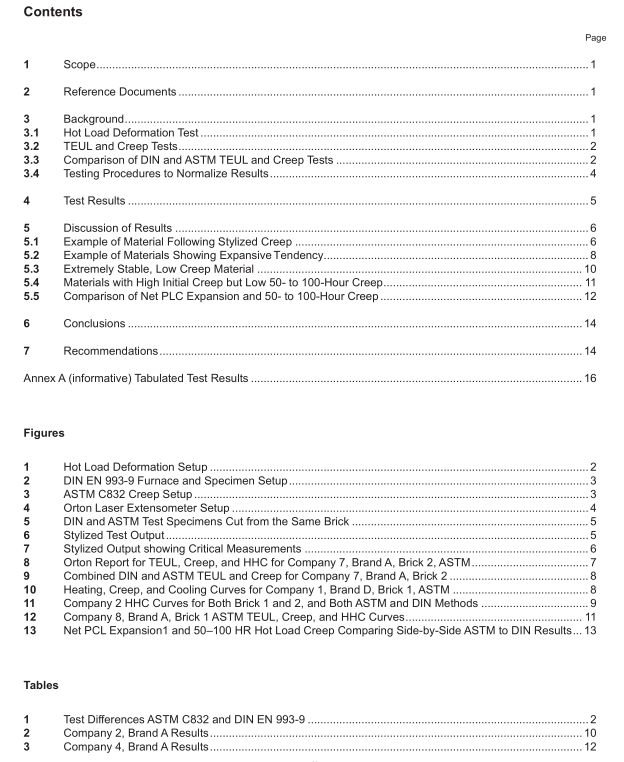 API TR 981 pdf download Thermal Expansion Under Load and Creep of Refractories—An Evaluation and Comparison of Testing Methods
1 Scope
1.1This report documents the results of thermal expansion under load (TEUL) and creep in compressiontesting conducted by ASTM C832 and DIN 993-9(same test as ISO 3187).
1.2The prime objective for this study is to determine if one or both tests should replace the ASTMC16 method.ASTM C16, modified from 1.5-hour to 100-hour hold, has been widely used to qualify brick for sulfur reactionfurnace use. In addition to deformation after 100 hours, the creep tests will provide additional information of TEULand evidence of mineralogical changes during their early life cycle in process operation.
1.3 The second objective for this study is to better define a refractory specfication protocol for premium brickused at high temperatures while supporting a load. Hold temperature in this testing was 1600 °℃ (3000 °F).Thistemperature is designed to simulate operating conditions of oxygen-boosted thermal reactors, as well thoseoccurring during over-temperature excursions.
1.4Orton Memorial Laboratory was selected to do all testing, as this laboratory can test both DIN and ASTMspecimens in the same furnaces.Orton used a laser non-contact measurement method for both the ASTM andDIN samples. This allowed an evaluation only of the laser method while still facilitating evaluations of differencesin heating rates, applied compressive load, and hold-time durations.
Reference Documents
M.K. Ferber，A. A. Weresczak,and J. G. Hemrick，“”Final Technical Report – Compressive Creep andThermophysical Performance of Refractory Materials,”ORNLTM-2005/134,Oak Ridge National Laboratory(2006).
S.Jin, H.Harmuth, and D. Gruber, ” Compressive Creep Testing of Refractories at Elevated Loads – Device,Material Law, and Evaluation Techniques,” Journal of the European Ceramic Society,34 ( 2014)4037-4042.
O.Buyukozturk and T.Tseng, ” Thermomechanical Creep Behavior of Refractory Concrete Linings,” Journalof the American Ceramic Society,65 [6] ( 1982) 301-307.)
s.Samadi,S. Jin,D.Gruber,H.Harmuth, and S.Schachner , ” Statistical Study of Compressive Creep Parametersof an Alumina Spinel Refratory,”Ceramics International,46 ( 2020) 14662-14668.
3 Background
3.1Hot Load Deformation Test
The ASTM C16 hot load deformation test is a long-standing standard used to screen brick and shapes for usein sulfur reaction furnaces. In this test, bricks are placed in a furnace and loaded as in Figure 1.The test bricksare measured at ambient temperature before and after heating to determine a net permanent linear change.Previous investigators have shown the short 1.5-hour duration under load at the test temperature and volumechanging mineralogical transformations can severely limit the usefulness of this test for high-temperature SRUapplications.
3.2 TEUL and Creep Tests In both the ASTM C832 and DIN E993-9 creep tests, the specimens are loaded and heated to the temperature, where heating stops and hold time begins. Dilation data are collected during the entire heat cycle, including controlled heating/cooling rates and fnal hold-time duration. In addition to hot load deformation after testing, the point of initial defection (T max or T 0 ), the thermal expansion under load, and creep rate is determined. This, therefore, provides much more additional data for engineering design as compared with the simple hot load test. In addition, Orton kept the output going as the specimens cooled back down to room temperature. In this testing program, the fnal hold temperature was 1650 °C (3000 °F) for 100 hours.
3.3 Comparison of DIN and ASTM TEUL and Creep Tests While ASTM C832 AND DIN EN 993-9 have many similarities, there are key diferences between the tests, as shown in Table 1.
3.4 Testing Procedures to Normalize Results A total of 15 commonly used high-temperature brick products for SRU applications were tested via ASTM C832 and DIN EN 993-9 at the Orton Materials Testing and Research Center in Columbus, Ohio. Because of similarities between the tests, all four of their furnace test units were designed to test both ASTM prism and DIN cylindrical specimens using the diferent loads and heating cycles required in the standards, as defned in Table 1. For the purposes of normalizing the testing, the fnal hold temperatures were set at the same 1650 °C (3000 °F) temperature for a duration of 100 hours, with the control thermocouple positioned outside the specimen as per the ASTM test. This diference is believed to be small, as it is only a matter of ~25 mm as compared with the DIN standard. The DIN method has had some problems with the pushrods deforming at very high temperatures and giving questionable results. Therefore, all testing was done by Orton using the non-contact laser measurement system.