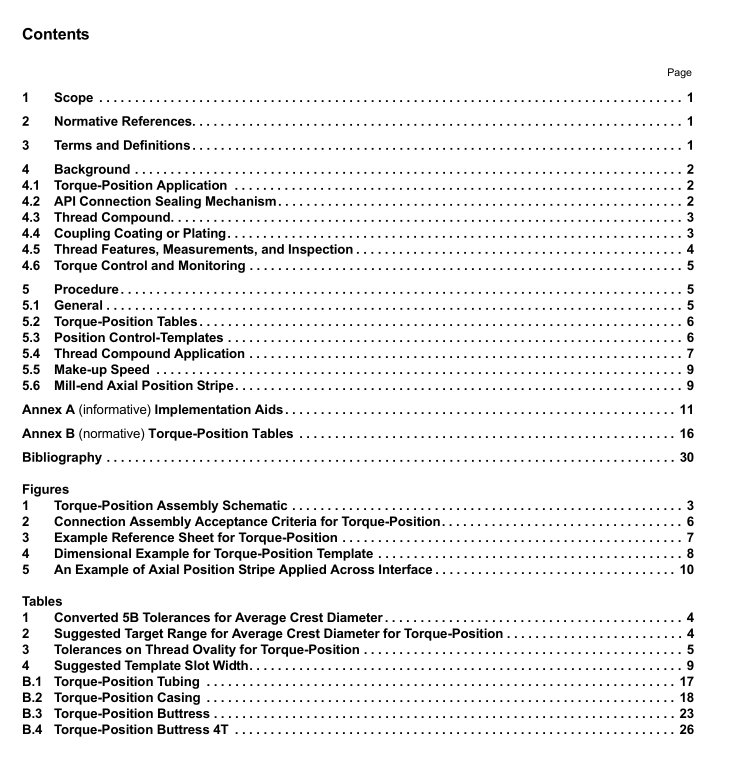 API TR 5TP pdf download Torque-Position Assembly Guidelines for API Casing and Tubing Connections
This document provides alternative connection assembly procedures to those found in APl 5B(power turns)and those found in APIl 5C1(optimum torque). The procedures set forth are referred to as “torque-position”because the make-up torque and final position are used as acceptance criteria for the assembly operation.The connections are threaded in accordance with API 5B. The torque-position assembly parameters havebeen developed for most SC (short round thread casing),LC (long round thread casing), BC (buttress threadcasing), and Eu (external upset tubing) connections.
Torque-position is a precision assembly method that relies on a controlled process for successfulimplementation. When defined threading and assembly procedures are followed, the performance of theresulting assembled connection is optimized.
2 Normative References
This document contains no normative references.For a list of documents and articles associated with APITR 5TP and torque-position assembly guidelines, please see the Bibliography.
3Terms and Definitions
For the purposes of this document, the following definitions apply.
3.1
addendum
The distance from the crest cone to the pitch cone.
3.2
connection
A connection is defined as a single pin assembled into one side of a coupling.
3.3
crest diameter
A measurement of the diameter of the crests of the pin or coupling threads at a specified axial positionmeasured from the pin nose or coupling face.
3.4
field-end make-up
The side or end of the coupling that is assembled at the rig floor as the pipe is being run into the well.
3.5
mill-end make-up
The side of the coupling that is assembled (bucked on) before the pipe is shipped to the field location. Thisconnection assembly operation is typically performed at the facility where the pin end is threaded (mill orthread processor).See Figure 1.
3.6
position band
A stenciled color mark applied at a specific axial distance from the nose of the pin that serves as an externalreference point for the position of the pin within the coupling during assembly (see Figure 3). In addition, theposition of the coupling face can be compared visually to judge for acceptance or rejection of the finalassembly (see Fligure 2y.
3.7
torque-position
An assembly technology for selected APl connections that features criteria for acceptance of the assemblybased on engagement of the pin within the coupling (position) and final torque.
3.8
4T
A variation of torque-position intended for BC connections on 8 5/8-in. through 20-in. OD casing that requirestin-plated couplings and a thread compound that has polytetrafluoroethylene (PTFE) particles. The term “4Trepresents torque, triangle, tin, and PTFE.
4
Background
4.1Torque-Position Application
Torque-position is a precision assembly method for assembling APl connections.The connection is made upwithin a prescribed torque range using hydraulic power tongs, such that the face of the coupling progressesinto a position band stenciled on the OD of the pipe.Connections that do not meet both the torque andposition criteria are rejected.
The use of torque-position connection assembly procedures and the application of this document shall be byagreement between the userlpurchaser and the manufacturer. These guidelines shall be used at thedesignated mill, processor’s facility, and rig site in order to ensure appropriate assembly of the connections(see Figure 1 and Figure 2).
4.2API Connection Sealing Mechanism
APl connections rely on contact pressure on the thread flanks to form an effective seal and a particulatethread compound to plug the root-to-crest gap on 8-round connections (SC, LC, EU) and thread flank gapson buttress connections.
ln an interference connection, the threads on both the pin and coupling are cut at a matching angle or taper.As the connection is made up, the pin becomes wedged into the coupling creating contact pressure. Thiscontact or bearing pressure is the sealing mechanism for this connection. To form a leak-resistant seal, thebearing pressures on the thread flanks must be greater than the internal pressure.
In addition to thread flank bearing pressures, it is also necessary to use a thread compound and a suitablecoating or plating on the coupling threads to form a leak-resistant seal. This combination of thread compoundand coating or plating prevents the migration of gas or fluid through the root-to-crest and thread flankclearances.
Sealing performance of some sizes and connections is enhanced by using modified seal-ring couplingsconforming to API 5CT,SR13.Seal rings are recommended for these connections because of the highmake-up torques that would be required without them. In a seal-ring coupling, a groove is cut in the couplingand a nonmetallic ring is installed in the groove prior to any thread compound application and connectionassembly.