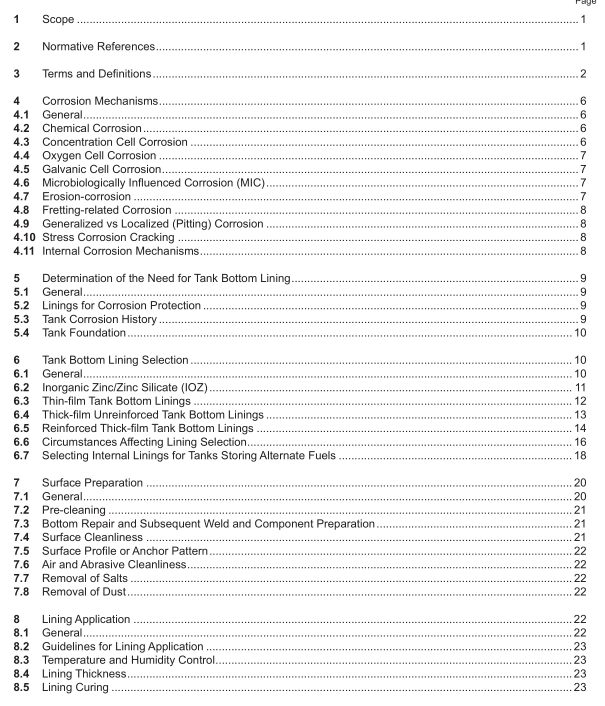 API RP 652 pdf download Linings of Aboveground Petroleum Storage Tank Bottoms
4.4 Oxygen Cell Corrosion Oxygen cell corrosion may occur when a surface deposit, mill scale, or crevice creates a localized area of lower oxygen concentration. The area under a surface deposit may be penetrated by a thin layer of electrolyte, which soon becomes depleted of oxygen. The diference in oxygen concentration between the inaccessible area and the bulk electrolyte creates a galvanic cell, with the contact area of the surface deposit being anodic to the surrounding tank plate.
4.5 Galvanic Cell Corrosion Hot-rolled carbon steel, typically used for the construction of petroleum storage tanks, is covered with a thin layer of oxide called mill scale, which is cathodic to the base steel. In the presence of a corrodent (such as dissolved oxygen) and an electrolyte, a galvanic corrosion couple forms at breaks in the mill scale. Accelerated pitting corrosion of the steel at breaks in the mill scale can result. Mill scale may be removed from both sides of the tank bottom plate by abrasive blast cleaning or by pickling, but removal of mill scale from the soil-side of the steel bottom is not commonly done. Removal of mill scale from the soil-side of new steel bottoms may be considered in an efort to promote a more uniform corrosion and minimize accelerated pitting corrosion that may occur. In some cases, welding can produce large diferences in the microstructure of a steel bottom plate, resulting in a built-in galvanic couple. In the presence of a corrodent and an electrolyte, preferential corrosion can occur at the heat-afected zones (HAZ) of the base metal near the welds. This type of corrosion can cause signifcant localized metal loss. Such a condition can also be created where new steel is installed alongside older steel that is in efect passivated by surface corrosion products, calcareous deposits and or surface contaminants such as a hydrocarbon flm. Mismatched materials can also create galvanic cell corrosion issues.
4.6 Microbiologically Infuenced Corrosion (MIC) Bacteria (e.g. sulfate reducing bacteria [SRB] and acid producing bacteria [APB]) are widespread in the petroleum industry. The role of bacteria in corrosion is universally recognized but the mechanisms are not well understood. Generally, the efect of bacteria on the corrosion of bare steel tank bottoms is negligible. In some cases, however, severe corrosion has been attributed to MIC. The bacteria colonies form deposits on the steel that may provide an efective barrier to the difusion of dissolved oxygen. Thus, the mere physical presence of bacterial deposits can promote aggressive pitting corrosion by the concentration cell mechanism described in 4.3. The metabolism of bacteria is important regarding the corrosion of storage tank bottoms. Most bacteria found in the petroleum industry are strict anaerobes that do not proliferate in the presence of oxygen; however, the dense bacterial colonies create a local anaerobic condition, even if some oxygen is available. By creating the local anaerobic condition, the bacteria can stay alive in the presence of oxygen, even though the colonies do not expand. In the case of SRB, colonies derive energy principally from the reduction of sulfates to sulfde, and this metabolic end product is corrosive to steel. Moreover, the iron sulfde corrosion product is cathodic to the base steel and may promote accelerated pitting corrosion by a galvanic mechanism, as described in 4.4, if dissolved oxygen is available as a corrodent. This type of corrosion can often be found in tanks containing crude oil, ultra- low sulfur diesel, fuel oils, and aviation fuels. CAUTION—Owner/operator operators have experienced severe MIC in recent years with isolated accelerated corrosion on uncoated tank bottoms far in excess of the average corrosion rates.
4.7 Erosion-corrosion Erosion-corrosion may occur in wastewater treating or mixing tanks where soil or small abrasive aggregate is present. To a lesser extent, erosion-corrosion can also occur at tank mixers in crude oil storage tanks. A water treatment tank blends chemicals into contaminated water to break any emulsions of oil and water. Agitation may increase corrosion by delivering more corrodent, such as dissolved oxygen, from the bulk of the stored product to the surface of the tank steel.