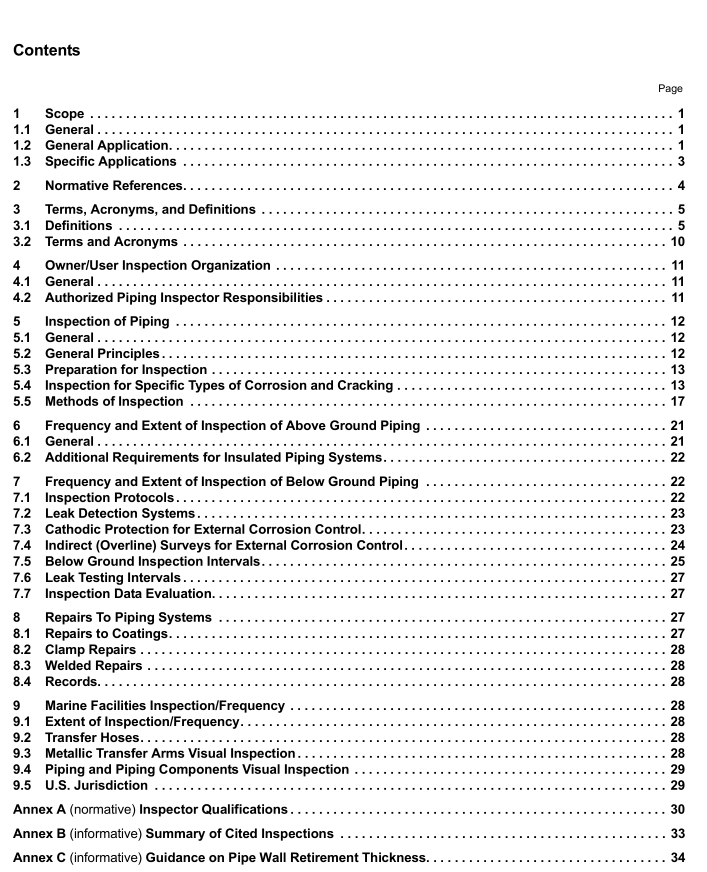 API RP 2611 pdf download Terminal Piping Inspection— Inspection of In-Service Terminal Piping Systems
1 Scope1.1General
API 2611 covers the inspection of typical terminal piping systems within terminal boundaries, which includes off-plotpiping.Off-plot piping includes, but is not limited to piping between facilities, piping that comes from or goes to arefinery, or other type facility, or piping that may cross a road, ditch or other property outside the confines of a terminalfacility.
Piping for transportation of finished fuel products such as gasoline, diesel, lubricating oils, jet fuel and aviation fuel arecovered by the scope of this document. Also covered are piping systems for nonfuel-type fluids. The piping for otherterminal nonfuel-type fluids typically found in terminals,include asphaltic products,process water，transmix, slopwater and biofuels.
The scope of this document does not include piping in a refinery facility, sanitary waste piping, cast iron piping andnonmetallic gravity flow piping systems.
1.2General Application
The purpose of this document is to align current terminal piping inspection practices with the appropriate andapplicable elements of APIl 570.APl 2611 covers the inspection of existing terminal piping systems.Figure 1ilustrates typical piping configurations that are encountered at terminals.In addition, the figure indicates possibledelineation of United Siates Department of Transportation [USDOT](i.e.ASME B31.4/APl 1104, Breakout) and non-USDOT (i.e.ASME B31.3,Storage) facilities.Understanding the Codes to which facilities were constucted canfaclitate the evaluation of the piping systems. Minor repairs include the restoration or replacement of pipingsystems to a safe operating condition.Where local or federal regulations apply, more stringent requirements maybe applicable.
Terminal management may choose to comply with the requirements of other piping inspection standards,whenappropriate. An example of this might be a terminal located within or adjacent to a refinery where there are alreadypiping inspection programs governed by other standards such as API 570 or company specific programs or whenspecifically required by regulation.
API 2611 incorporates industry accepted practice for terminals as well as selected principles from API 570. Thisdocument addresses the piping and associated failure modes commonly found in terminals with piping systemsoperating at a maximum process design pressure of 300 psi at ambient temperature (an exception on designtemperatures is made for asphaltic products). lf any repair or alteration results in a change of design conditions,arerating per API 570 shall be satisfied.For asphaltic products this document covers the maximum process designpressure of 150 psi at a temperature range of 25 °F to 450 °F(-3.9°C to 232 °C).
In general, with regard to non-regulated off-plot piping, the terminal Owner/lUser may elect to base their inspectionrequirements on API 2611, the more stringent APl 570 requirements, a combination of the two, or a combination ofselected requirements from API 2611 and APl 570 in conjunction with their own set of requirements. Regardless ofthe source, the OwnerlUser shall have inspection procedures established, documented and adhered to for theirterminal facilities.
With the advent of new products, including the use of various oxygenated fuels; special consideration shall be givento the compatibility of the piping system. of particular interest are seal materials, gaskets, and other elastomers withadditives and oxygenates, such as ethanol or methanol. In addition , consideration shall be given to the possibility ofstress corrosion cracking (scC) agents. Additional information can be found on the topic of SCC in API 939-D.
API 2611 shall not be used as a substitute for the original construction requirements governing a terminal piping system before it is placed in-service; nor shall it be used in conflict with any prevailing regulatory requirements.
1.3 Specific Applications
Specific applications and exceptions of this document are detailed in 1.3.1 through 1.3.2.
1.3.1 Included Fluid Services
Except as provided in 1.3.2, API 2611 applies to piping systems for hydrocarbons and similar flammable, combustible or toxic fluid services, such as the following:
a) finished petroleum products (e.g. gasolines, jet fuels and kerosene, heating oils, transmix and liquid petroleum);
b) finished product additives as defined by jurisdictional regulations;
c) hydrocarbon vapors (control/recovery systems);
d) process or contact water (PCW);
e) asphaltic products;
f) ethanol and other biofuels.