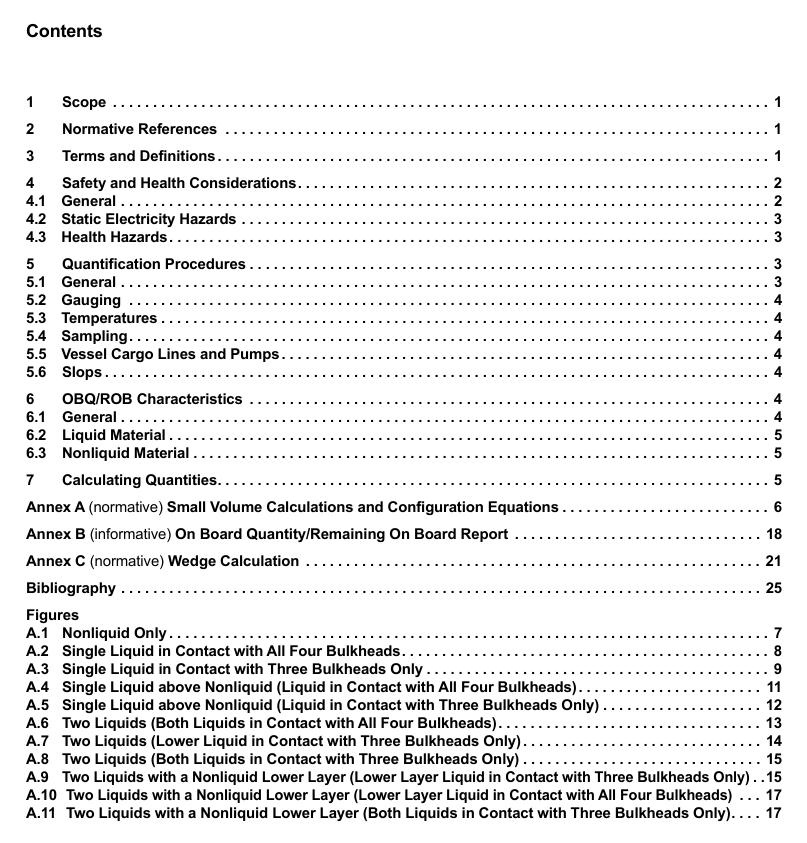 API MPMS 17.4 pdf download Manual of Petroleum Measurement Standards Chapter 17.4 Method for Quantification of Small Volumes on Marine Vessels (OBQ/ROB)
Personnel involved in inspection, measurement, and/or sampling on board a vessel shall at all times be accompanied by a designated ship’s representative.
4.2 Static Electricity Hazards If the tank is in a noninert condition, specific precautions will be required with regard to safe measurement and sampling procedures when handling static accumulator oils.
These are generally as follows: during loading, and for 30 minutes after the completion of loading, metallic equipment for dipping (gauging), ullaging, or sampling shall not be introduced into or remain in the tank. Examples of equipment include manual steel ullage tapes, portable gauging devices mounted on deck stand pipes, metal sampling apparatus, and metal sounding rods. Nonconducting equipment with no metal parts may, in general, be used at any time. However, ropes or tapes used to lower equipment into tanks shall not be made from synthetic materials. After the 30-minute waiting period, metallic equipment may also be used for dipping (gauging), ullaging, and sampling, but it is essential that it is effectively bonded and properly grounded before it is introduced into the tank and that it remains grounded until after it has been removed. Operations carried out through stand pipes are permissible at any time because it is not possible for any significant charge to accumulate on the surface of the liquid within a correctly designed and installed stand pipe. A stand pipe should extend the full depth of the tank and be effectively bonded and earthed to the tank structure.
4.3 Health Hazards Petroleum vapor dilutes oxygen in the air and may also be toxic. Hydrogen sulfide (H 2 S) vapors are par- ticularly hazardous. Petroleum vapors with relatively low concentrations of hydrogen sulfide may cause unconsciousness or death. During and after the opening of any tank or vapor control valve, personnel should position themselves to avoid any gas that may be released. Harmful vapors or oxygen deficiency cannot always be detected by smell, visual inspection, or judgment. Appropriate precautions should be used for the protection against toxic vapors or oxygen deficiency. It is recommended that users always wear gas monitors that, as a minimum, measure gas concentrations of H 2 S. Procedures should be developed to provide for the following:
a) exposure monitoring,
b) need for personal protective equipment,
c) emergency rescue precautions. When necessary, suitable fresh air breathing equipment should be worn prior to entering the gauge site and during the gauging and sampling procedure. This discussion on safety issues is not exhaustive and the appropriate API or Energy Institute publications, together with ISGOTT [5] , International Convention for the Safety of Life at Sea (SOLAS) [7] , and Oil Companies International Marine Forum (OCIMF) publications, should be consulted for applicable safety precautions.
5 Quantification Procedures
5.1 General Annex A provides examples of small volume calculations and configurations. Annex B provides an example of an on board quantity (OBQ)/remaining on board (ROB) report form. Annex C provides an explanation and example of the wedge formula and also provides a wedge calculation worksheet.
5.2 Gauging 5.2.1 Before taking any OBQ/ROB measurements, record the trim and list of the vessel. If a list condition exists, a request shall be made to remove this condition prior to commencing measurement.
5.2.2 All compartments on board the vessel that could contain OBQ/ROB shall be gauged and quantified prior to loading and after discharge. Gauging shall be performed in accordance with procedures outlined in API MPMS Chapter 3, API MPMS Chapter 1 7.1 , API MPMS Chapter 1 7.2, and API MPMS Chapter 1 7.1 1 , as applicable. Pipeline volumes should be accounted for based on condition of pipeline since they cannot be directly gauged.
5.2.3 Gauging OBQ/ROB at several points in a vessel compartment is very useful to establish whether material is or is not distributed across a tank bottom. When multiple gauging points in a compartment are available, manual gauges from each gauge point should be taken and recorded.