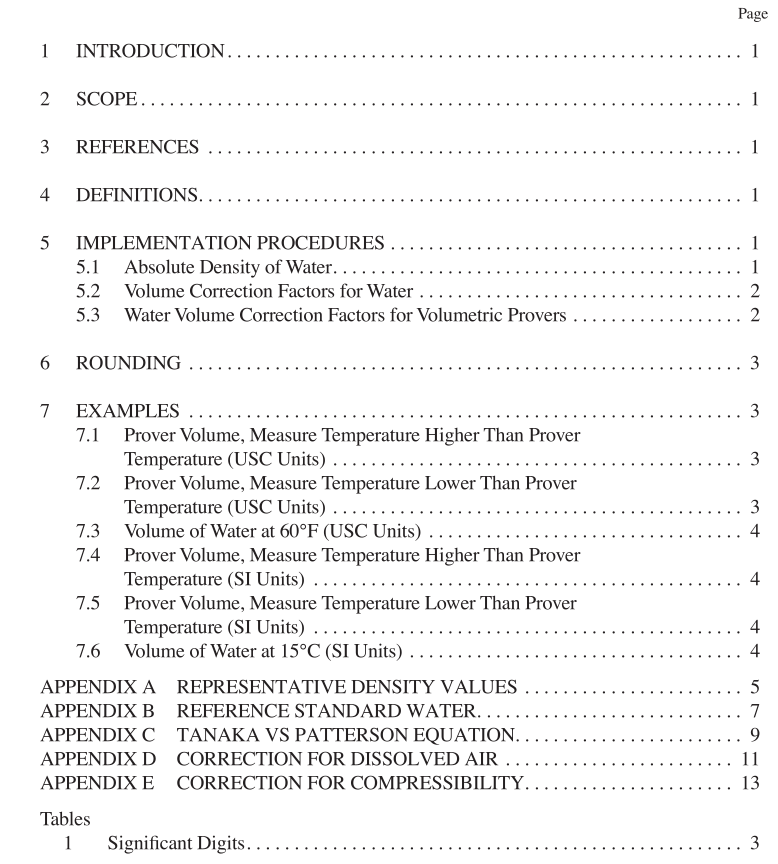 API MPMS 11.4.1 pdf download Manual of Petroleum Measurement Standards Chapter 11—Physical Properties Data Section 4—Properties of Reference Materials Part 1—Density of Water and Water Volumetric Correction Factors for Water Calibration of Volumetric Provers
1lntroduction
This Standard specifies the density of water to be used in
all applicable API MPMs Standards.It also specifies the vol-ume correction factor equation for water and demonstrates its use for water calibration of volumetric provers (see APIMPMS Chapters 12.2.1,12.2.3).
2 Scope
This standard is applicable to all API Standards that use thedensity of water or its volume correction factors.
3References
H. Wagenbreth and H. Blanke,“The Density of Water in
the International System of Units and in the Interna-tional Practical Temperature Scale of1968,”Mitteilungen der Plrysikalish-Technischen Bunde-sanstalt (PTB-Mit),412-415,June 1971.
G.S. Kell，Journal of Chemical Engineering Data，1967,
12,66-69; ibid,1975,20, 97_105.
N.Bignell, “The Effect of Dissolved Air on the Density of
Water,”Metrologia,1983,19,57-59.
J.B.Patterson and E.C. Morris, “Measurement of Absolute
Water Density,”Metrologia,31,277-288,1994.M. Tanaka,G. Girard,R. Davis,A. Peuto and N. Bignell,“Recommended table for the density of waterbetween 0 C and 40°C based on recent experimen-tal reports,” Metrologia,38,301-309, 2001.
4Definitions
4.1density,absolute: The density of a solid or liquidsubstance at a specified temperature is the mass of the sub-stance occupying a unit of volume at the specified tempera-ture. Density so defined is sometimes referred to as“truedensity” or as “density in vacuo.”When reporting density, theunits of mass and volume used and the temperature of thedetermination must be stated (for example, grams per millili ter at 15¡C). Density is assumed to be for water at atmo- spheric pressure unless otherwise stated.
4.2 volume correction factor (VCF): The density of a liquid at temperature t divided by its density at a chosen ref- erence temperature. Multiplying a liquidÕs volume mea- sured at temperature t by the VCF provides the volume of the liquid at the chosen reference temperature. Volume Cor- rection Factors are assumed to be for water at atmospheric pressure unless otherwise stated. Certain API MPMS Chap- ters call this factor CTDW. 5 Implementation Procedures The implementation procedures below are the standard. Representative density values are presented in the Appendix A for programming veriÞcation purposes only.
5.1 ABSOLUTE DENSITY OF WATER
The previous standard (API MPMS 11.2.3, 1984), which this Standard replaces, was based on the internationally accepted work of Wagenbreth and Blanke, which produced a density of 999.012 kg/m 3 at 60¡F. In 1994, Patterson and Morris published a paper proposing a new equation based on their laboratory data of VSMOW (see Appendix B), which was accepted by the NIST (National Institute of Standards and Technology). In 2001, a review (Tanaka, et al. ) proposed a new equation regressed from the data of several researchers (including that of Patterson and Morris). Although they are aware of this paper, the NIST at this writing has chosen to continue to accept the work of Patterson and Morris. This Standard is therefore based on that same work, applicable between 1¡C and 40¡C (see Appendix C). The following equation expresses the density of water as a function of temperature in degrees Celsius:
(1) r tC r 0 1 ADt BDt 2 CDt 3 DDt 4 EDt 5 + + + +
The following equation expresses the density of water as a function of temperature in degrees Fahrenheit: r t F = r 0 [ 1 Ð (A D t F + B D t F 2 + C D t F 3 + D D t F 4 + E D t F 5 )] (2)
These equations provide the following values:
Density at 60¡F (15.5556¡C): 999.016 kg/m
Density at 15¡C (59¡F): 999.102 kg/m
Density at 20¡C (68¡F): 998.206 kg/m
The output of equation (1) and (2) is rounded to three decimal places for further use.
5.2 VOLUME CORRECTION FACTORS FORWATER
The volume correction factor equation for water with respect to a chosen reference temperature is the density at temperature t ( r t C ) divided by the density of water at that ref- erence temperature. For 15¡C, it is:
The output of equation (3), (4), and (5) is rounded to no more than 6 decimal places for further use. Although VCFs are assumed to be for water at atmospheric pressure unless otherwise stated, the VCFs for water under pressure are slightly smaller. As this difference is very small, application of such VCFs should be contingent upon agreement of both parties to a transaction after evaluation of the difference.