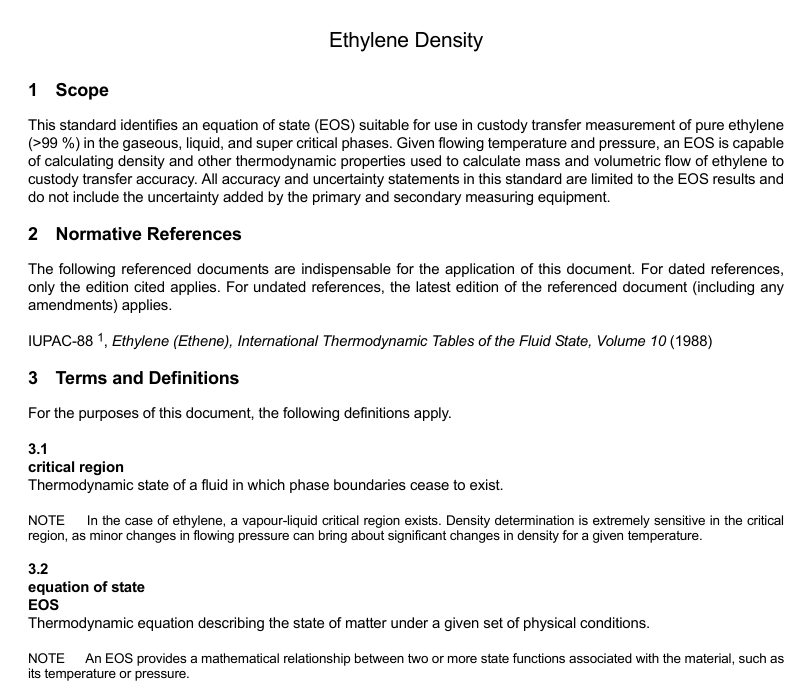 API MPMS 11.3.2.1 pdf download Manual of Petroleum Measurement Standards Chapter 11.3.2.1 Ethylene Density
1scope
This standard identifies an equation of state (EOS) suitable for use in custody transfer measurement of pure ethylene(>99 %) in the gaseous, liquid, and super critical phases. Given flowing temperature and pressure, an EOS is capableof calculating density and other thermodynamic properties used to caiculate mass and volumetric flow of ethylene tocustody transfer accuracy.All accuracy and uncertainty statements in this standard are limited to the EOS results anddo not include the uncertainty added by the primary and secondary measuring equipment.
Normative References
The following referenced documents are indispensable for the application of this document. For dated references,only the edition cited applies. For undated references, the latest edition of the referenced document (including anyamendments) applies.
IUPAC-88 1, Ethylene(Ethene), International Thermodynamic Tables of the Fluid State,Volume 10 (1988)3 Terms and Definitions
For the purposes of this document, the following definitions apply.
3.1
critical region
Thermodynamic state of a fluid in which phase boundaries cease to exist.
NOTEIn the case of ethylene, a vapour-liquid critical region exists. Density determination is extremely sensitive in the criticalregion, as minor changes in flowing pressure can bring about significant changes in density for a given temperature.
3.2
equation of stateEos
Thermodynamic equation describing the state of matter under a given set of physical conditions.
NOTE AnEOS provides a mathematical relationship between two or more state functions associated with the material, such asits temperature or pressure.
4Ethylene Equations of State4.1General
This standard provides a reference for an ethylene Eos:
– IUPAC-88, part of the Ethylene，International Thermodynamic Tables of the Fluid State，Volume 10 (1988)
publication.
IUPAC-88 is a publication that incorporates the work carried out by Jahangiri et al. [1l on ethylene. The paper”Thermodynamic Properties of Ethylene from the Freezing Line to 450 K at Pressures to 260 MPa” was published ayear or so before luPAC published lookup tables in 1988.
The IPUAC EOS is acceptable for use in custody transfer applications. However, the user should be aware that acritical region for ethylene exists across pressures ranging approximately from 5171.1 kPa to 5860.5 kPa (750 psig to850 psig) and temperatures ranging approximately from 10 ‘C to 21.1°C(50 °F to 70 °F), Density predictions usingthe lUPAC Eos are not recommended in this region.
For the lUPAC-88 density prediction, the estimated uncertainty of the EOS is less than ±0.08 % for pressures up to260 MPa(65,266.9 psig) and temperatures up to 176.85 °C(350.3 °F), with the exception of the critical region.
4.2IUPAC-88 Equation of State
The paper by Jahangiri et al.[1l is the basis for the IUPAC-88 EOS.According to the paper, the Helmholtz energy forethylene is given below by the fundamental equation:
A(p, T) = AR(p. T)+A(p, T)
(1)
where AR(p, T) is the ideal gas contribution to the Helmholtz energy of any state.
The term A(p,T) is the contribution represented by the compressibility of the real gas. After additional manipulation,the functional form used for the fundamental equation for ethylene is a nondimensional Helmholtz energy potentialfunction below:
(8,t) = A(p, T)/RT= c (8, t)+a(8,t)
2)
where
or s°。…6T_edr+ed r= RgR°-1+lnraRJTot
3)
where
t = T./T,- T./ To,8 = p/ pe,= Pol Pe
Pis the critical density;
Tis the critical temperature;
Tois the reference temperature 298.15 K;Pois the reference pressure 0.101525 MPa;
is the ideal gas density at To and Po;H。is the reference enthalpy at To;
s。is the reference entropy at To and Po:
Ris the gas constant 0.00831434(MPa dm3)/(mol K).
Given the equations above, it is possible to derive functions for calculating properties of ethylene such as density. The equations and procedures described in Section 5.4 of Jahangiri et al.’s paper illustrate how density can be calculated from the methods above.
5 Implementation Procedures To properly implement an ethylene EOS, the user should follow the implementation procedures in the IUPAC-88 publication. Through mathematical manipulation it is possible to derive a form in terms of density, pressure and temperature. However, it is recognized that tolerances for solutions and validation procedures are not provided in the publication itself. To maintain industry consistency, a technical report will be issued separate of this standard providing guidance on how to perform the calculations.