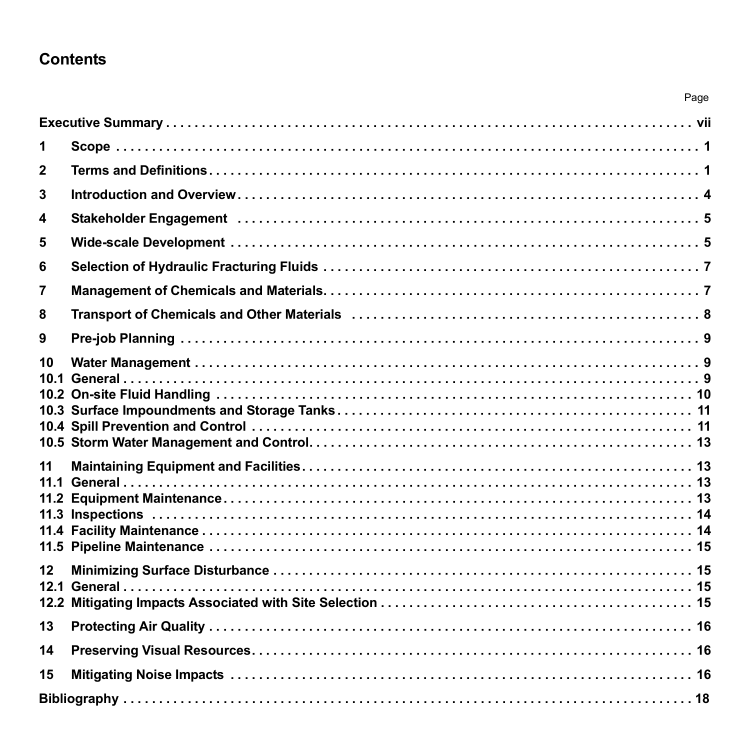 API GD HF3 pdf download Practices for Mitigating Surface Impacts Associated with Hydraulic Fracturing
3 Introduction and Overview
Hydraulic fracturing is the injection of fluids into a subsurface geologic formation containing oil and/or gas at a pressure sufficient to induce fractures through which oil or natural gas can flow to a producing wellbore. Hydraulic fracturing has played an important role in the development of America’s oil and gas resources for nearly 60 years. In the U.S., an estimated 35,000 wells are hydraulically fractured annually and it is estimated that more than one million wells have been hydraulically fractured since the first well in the late 1940s [4] . As production from conventional oil and gas fields continues to mature and the shift to non-conventional resources increases, the importance of hydraulic fracturing will continue to escalate as new oil and gas supplies are developed from these precious resources.
The escalating importance of these resources is a testament to America’s increased reliance on natural gas supplies from unconventional resources such as gas shale, tight gas sands and coal beds—all resources that generally require hydraulic fracturing to facilitate economically viable natural gas production [5] . In addition, advances in hydraulic fracturing have played a key role in the development of domestic oil reserves, such as those found in the Bakken formation in Montana and North Dakota [6] .
In fact, very few unconventional gas formations in the U.S. and throughout the world would be economically viable without the application of horizontal drilling and hydraulic fracturing. These extremely low permeability formations tend to have fine grains with few interconnected pores. Permeability is the measurement of a rock or formation’s ability to transmit fluids. In order for natural gas to be produced from low permeability reservoirs, individual gas molecules must find their way through a tortuous path to the well. Hydraulic fracture stimulation can increase the pathways for gas flow in a formation by several orders of magnitude [7] .
Recently, natural gas production from gas-bearing shales in the U.S. has increased significantly, with hydraulic fracturing playing a key role. Some of this expansion has occurred in geographic regions with little to no history of oil and gas development. While the use of hydraulic fracturing itself has not introduced any new or unique environmental concerns associated with oil and gas development, as shale gas development has occurred in new areas, new challenges have been encountered, and increased focus has been given to address community concerns. For example, communities may be especially sensitive to the surface footprint left by expanded oil and natural gas development. In response, operators should consider the advantages of multi-well pad development and horizontal well fracturing.
Compared to drilling vertical wells with single hydraulic fractures, multi-well pad drilling and fracturing horizontal wells from one location can significantly reduce surface disturbance and the potential for surface-related impacts. Horizontal drilling has the advantages of requiring substantially fewer well pads and reducing surface disturbances, while providing for a comparable volume of production.
Where shale gas development has intersected with urban settings, regulators and industry have developed special practices to alleviate nuisance impacts, impacts to sensitive environmental resources and interference with existing commercial activity. Examples of such practices in the Dallas/Fort Worth area include establishing set-backs of buildings and construction at specific distances from the natural gas wellbore; establishment of buffer zones around drill sites next to protected use areas; limiting gas well drilling to only certain identified property; and requiring approval of both a local Specific Use Permit and a Gas Well Permit. Nonetheless, this increase in attention and focus on hydraulic fracturing requires operators to pursue such practices with renewed focus and diligence, as set forth in this guidance document.
4 Stakeholder Engagement One way to address many of the concerns associated with hydraulic fracturing operations is through proactive engagement by operators with regulators and surface owners. Collaboration between the industry, regulators, and the public have resulted in positive solutions for the environment.