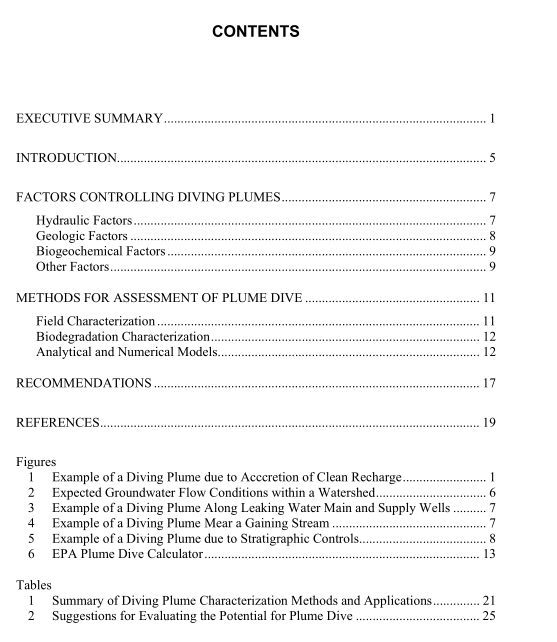 API Bull 24 pdf download Downward Solute Plume Migration: Assessment, Significance, and Implications for Characterization and Monitoring of “Diving Plumes”
The factors that control groundwater flow direction (and therefore, any resulting plume dive) are largelyindependent of the solutes comprising a dissolved-phase plume. This paper discusses the downward migration of dissolved-phase plumes as a result of geologic, hydraulic, andor biogeochemical factors andis distinguishable from sinking free-phase mixtures referred to as dense non-aqueous phase liquids (DNAPLs). Therefore, any solute plume, whether it originates from light nonaqueous phase liquids (LNAPLs) or DNAPLs, is potentially subject to geologically or hydraulically induced vertical migration.For most trace organic contaminants, the density of the dissolved chemical does not affect the tendency fora plume to dive. Density-driven flow of dissolved plumes becomes important only when chemical concentrations are such that the density of the groundwater/solute mixture becomes significantly greaterthan the density of water (for many common organic compounds such as MTBE and benzenc, toluene,ethylbenzene, and total xylenes (BTEX) would require concentrations greater than the chemical’s effectivesolubility).Although LNAPLs may float and DNAPLs may sink when in pure phase, the constituents thatdissolve from these free-phase mixtures into groundwater are neutrally buoyant.
Dive is typically more evident in longer and older dissolved-phase plumes. MTBE is often associated withthe phenomena of “diving plumes” because it is highly soluble, does not sorb significantly, is often slow tobiodegrade, and consequently will often migrate greater distances from a source than other LNAPL constituents such as BTEX.
lf the magnitude of dive is significant, chemicals may migrate below shallow monitoring well screens andgo undetected at sites with monitoring networks that rely on single well screens positioned near the watertable. Several implications arise from missing a diving plume. If a diving plume is not adequately characterized, samples collected from water table wells screened in the overlying accumulation of cleangroundwater may be falsely interpreted, which could lead to inadequately characterizing risk to receptors,or overestimating the significance of natural attenuation. Additionally, inadequate characterization canresult in a greater potential for under-designing remediation systems, and inadequate assessment of
remedial performance.As such, development of a Site Conceptual Model (SCM) is important to assess siteconditions and identify the potential for plume dive, and evaluate potential risks to receptors.
lf clean water overlies a portion of a contaminant plume, this may greatly reduce the potential for volatileemissions from the plume into soil gas and subsequent subsurface vapor intrusion into overlying buildings.Therefore, characterization of the magnitude of plume dive can assist in assessing the potential for
subsurface vapor intrusion.
The phenomenon of plume diving has been observed at several detailed field studies throughout the UnitedStates. Plume dive as a function of gradual build-up or accretion of recharge has been noted at several siteslocated in Long Island, New York (Weaver and Wilson 2000; Weaver et al. 1999).At one site, comparisonof MTBE analytical results from depth-discrete monitoring wells to vertically averaged results falsely
indicated that although averaged concentrations fell below New York State*s threshold value of 10 ug/l,significant concentrations of almost 8,000 ug/l occurred at depth in the downgradient portions of the
aquifer. In addition, the benzene plume appeared to be shortened to approximately 1/3 of its actual length,and the averaged concentrations falsely indicated no chromatographic separation of the benzene and xyleneplumes(this is inconsistent with the expected and observed attenuation behavior of these constituents).Atanother site, downward migration of constituents was further induced by nearby supply well pumping fromdeeper aquifers.
At a South Carolina site, higher concentrations of MTBE and benzene occurred in the deeper samplingports of multilevel monitoring wells in an area below a drainage ditch as a result of recharge events thatdeflected originally horizontal groundwater flow patterns (Landmeyer et al.1998; Lahvis et al. 2003).Studies done at a site in Cape Cod, Massachusetts,indicate accretion of precipitation, rather thanhydrodynamic dispersion, was the dominating factor controlling vertical migration of a VOC plume(Reynolds et al.1991).
Stratigraphy can also influence plume behavior. At a site in western Kansas, an MTBE plume in the
shallow portion of the water table aquifer near the source migrated downward along preferential pathways(Hattan and Blackburn 1999). In California, a natural gradient tracer experiment on an MTBE plume at theU.S. Naval Base Ventura County, Port Hueneme, indicated the plume center of mass deepened with migration distance because of the dip of the stratigraphy (Amerson and Johnson 2003).
The U.S. EPA Region 5 has conducted research on how to best monitor leaking underground storage tank(LUST) sites to characterize diving MTBE plumes.Results at three sites in the Midwest (Illinois,
Wisconsin, and Michigan) indicate higher concentration plume “cores” at progressively deeper intervalswith distance from the source as a function of recharge area and/or changes in lithology at the water table.(Alvarez, 2003).
The objective of this technical bulletin is to promote a common understanding of the phenomenon of divingplumes. The following sections discuss the factors that can cause plumes to dive, show methods used toevaluate the potential for and magnitude of diving plumes, and provide suggestions regarding the identification and characterization of diving plumes.