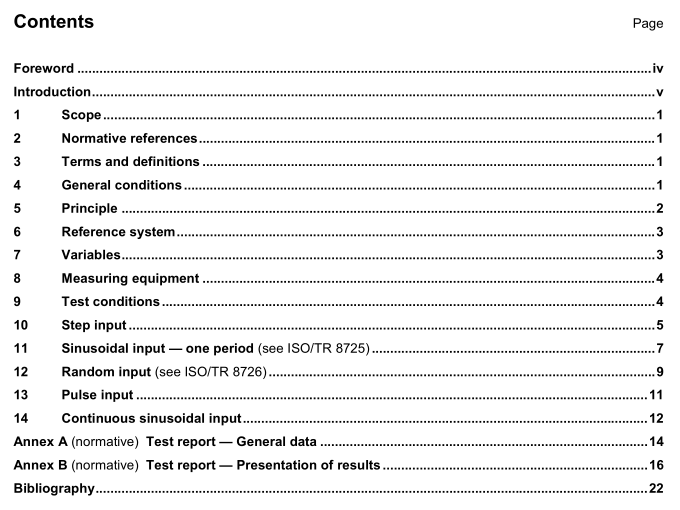 ISO 7401 pdf download Road vehicles — Lateral transient response test methods — Open-loop test methods
9.2.2 Minimum loading condition For the minimum loading condition, the total vehicle mass shall consist of the complete vehicle kerb mass (Code: ISO-M06) in accordance with ISO 1176:1990, 4.6, plus the masses of the driver and the instrumentation. The mass of the driver and the instrumentation should not exceed 150 kg. The load distribution shall be equivalent to that of two occupants in the front seats, in accordance with ISO 2416.
9.2.3 Maximum loading condition For the maximum loading condition, the total mass shall be equal to the maximum authorized total mass. For the maximum loading condition, the total mass shall be equivalent to the complete vehicle kerb mass, plus 68 kg for each seat in the passenger compartment and with the remaining maximum mass of transportable goods equally distributed over the luggage compartment in accordance with ISO 2416. Loading of the passenger compartment shall be such that the actual wheel loads are equal to those obtained by loading each seat with 68 kg according to ISO 2416. The transient lateral response is strongly influenced by the moments of inertia and by the height of the centre of gravity.
Wheel loads define only one of several factors contributing to the dynamic properties of vehicles. Care shall be taken to keep test conditions between test runs as constant as possible. Therefore, it is recommended to limit weight changes caused by fuel consumption.
9.3 Warm-up The warm-up procedures specified in 6.1 of ISO 15037-1:2006 shall apply.
9.4 Test speed The test speed is defined as the nominal value of the longitudinal velocity. The standard test speed is 100 km/h. Other test speeds of interest may be used (preferably in 20 km/h steps). 10 Step input 10.1 Test procedure Drive the vehicle at the test speed (see 9.4) in a straight line. The initial speed shall not deviate by more than 2 km/h from the test speed. Starting from a 0 °/s ± 0,5 °/s yaw velocity equilibrium condition, apply a steering input as rapidly as possible to a preselected value and maintain at that value for several seconds after the measured vehicle motion variables have reached a steady state. In order to keep the steering input short relative to the vehicle response time, the time between 10 % and 90 % of the steering input should not be greater than 0,15 s. No change in throttle position shall be made, although speed may decrease.
A steering- wheel stop may be used for selecting the input angle. Take data for both left and right turns. All data shall be taken in one direction followed by all data in the other direction. Alternatively, take data successively in each direction for each acceleration level, from the lowest to the highest level, this being preferable with respect to tyre wear and symmetrical vehicle stress. Record the method chosen in the test report (see Annex A). Data shall be taken throughout the desired range of steering inputs and response variable outputs. Determine the steering-wheel angle amplitude by steady-state driving on a circle the radius of which gives the preselected steady-state lateral acceleration at the required test speed. The standard steady-state lateral acceleration level is 4 m/s 2 . Additional levels of 2 m/s 2 and 6 m/s 2 may be used.
Perform all test runs at least three times.
10.2 Data analysis
10.2.1 Response time The transient-response data reduction shall be carried out such that the origin for each response is the time at which the steering-wheel angle change is 50 % complete. This is the reference point from which all response times are measured. Response time is thus defined as the time, measured from this reference, for the vehicle transient response to first reach 90 % of its new steady-state value (see Figure 1).
10.2.2 Peak response time The peak response time is the time, measured from the reference point, for a vehicle transient response to reach its peak value (see Figure 1). In some instances, system damping can be so high that a peak value cannot be determined. If this occurs, data sheets should be marked accordingly.