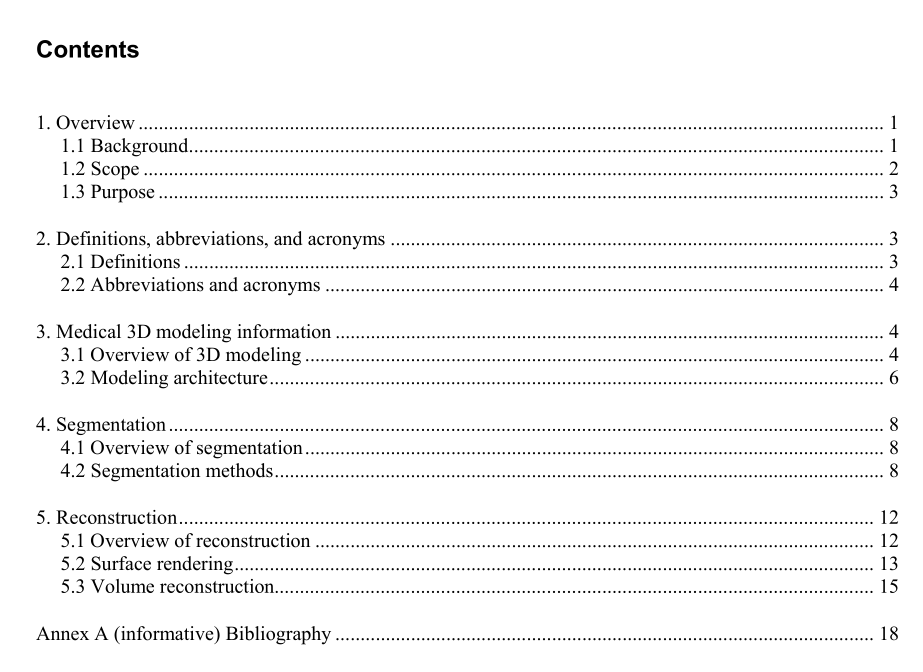 IEEE Std 3333.2.1 pdf download IEEE Recommended Practice for Three-Dimensional (3D) Medical Modeling
3.2 Modeling architecture
3.2.1 Medical image acquisition
3.2.1.1 Background
An important ingredient in further improving 3D video-processing technologies is the incorporation ofbetter models of 3D perception.Among these, saliency detection, or the automated discovery of points ofhigh visual interest, conspicuity, or task relevance, is a challenging problem.
3.2.1.2 General requirement
In the medical field, the most important problems are treatment planning and virtual practice fromadvanced imaging modalities. These problems should be solved by employing various methods using a 3Dmodel of the patient,which will improve diagnostic accuracy and allow for the simulation of medicalprocedures using a controller.
Accurate 3D models shall be obtained by 3D reconstruction of serial sectional images of the structures thatare derived from computed tomographs(CTs) and magnetic resonance images (MRIs).
3.2.1.3 Acquisition procedure
To make 3D patient models, sequential 2D images are necessary and should be acquired from CTs,MRls,and an optical microscope.Generally, 2D patient images should be acquired from a CT or MRI scanning ofthe patients’ body by intervals of a few millimeters.
Each image has its own strengths and weaknesses according to what has been observed. In the case of CT,bones will be clearly identified, therefore bone- or joint-related diseases will be effectively shown. In thecase of MR, cartilage, muscle, and nerves will be clearly shown as well as the bone, therefore MR is shownto be more effective (see Figure 4).
3.2.3 Temporal characteristics of 3D contents
A medical 3D model using the phase information of segmentation and feature will be able to reconstruct apatient’s body. Medical 3D reconstruction shall be completed with surface- and volume-rendering data.
4.Segmentation
4.1 Overview of segmentation
Segmentation in medical imaging is generally considered a difficult problem, mainly because of the sheersize of the datasets coupled with the complexity and variability of the anatomic organs. The situation isworsened by the shortcomings of imaging modalities, such as sampling artifacts,noise,low contrast, etc.,that may cause the boundaries of anatomical structures to be indistinct and disconnected. Thus,the mainchallenge of segmentation algorithms is to accurately extract the boundary of the organ or ROI and separateit from the rest of the dataset.
4.2 Segmentation methods
Numerous segmentation algorithms are found in the literature.Due to the nature of the problem ofsegmentation, most of these algorithms are specific to a particular problem and thus have little significancefor most other problems.
This standard will try to cover all the algorithms that have a generalized scope and that are the basis ofmost current segmentation techniques. Iln addition，we will concentrate only on 3D volumes and thuspresent each algorithm with respect to its application on 3D volumes.
To make 3D models from 2D images, it was necessary to segment the area of interest in the 2D image.3Dmodels were made by stacking serial 2D images, therefore segmentation was also done consecutively.Generally， segmentation was done on horizontal images, but in some cases,segmentation was done oncoronal or sagittal images that were made by stacking horizontal images and then cutting in the coronal orsagittal directions (see Figure 6).
In the medical imaging field,a variety of algorithms for the automation of segmentation have beendeveloped [B1]，[B3]，[B4]，[B5]. However，some anatomical structures cannot be segmentedautomatically， such as detailed muscles， because the borders of neighboring structures were not clearlyidentified on 2D images.
Segmentation could be done efficiently using commercial software that handles medical images [B6],[B10].These software packages have many functions，including semiautomatic segmentation，whenoptimally used.
4.2.1 Thresholding Thresholding approaches segment scalar images by creating a binary partitioning of the image intensities. A thresholding procedure attempts to determine an intensity value, called the threshold, that separates the desired classes. The segmentation is then achieved by grouping all pixels with intensity greater than the threshold into one class and all other pixels into another class (see Figure 7). Thresholding is often used as an initial step in a sequence of image-processing operations. Its main limitations are that, in its simplest form, only two classes are generated, and it cannot be applied to multi- channel images. In addition, thresholding typically does not take into account the spatial characteristics of an image, which causes it to be sensitive to the noise and intensity inhomogeneities that will occur in MRIs. Both these artifacts essentially corrupt the histogram of the image, making separation more difficult. For these reasons, variations on classical thresholding have been proposed for medical image segmentation that incorporates information based on local intensities and connectivity.