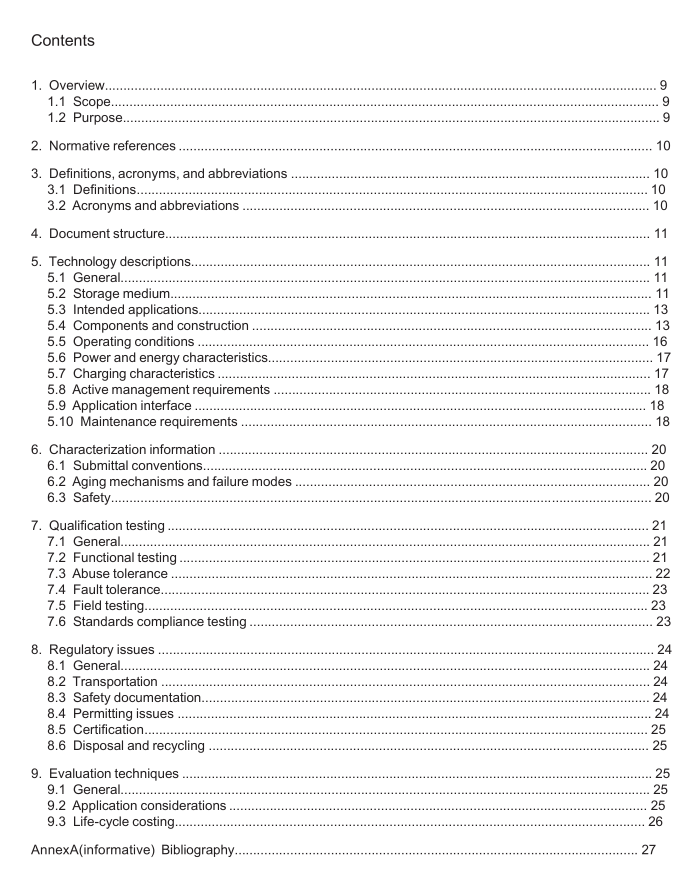 IEEE Std 1679.2 pdf download IEEE Guide for the Characterization and Evaluation of Sodium-Beta Batteries in Stationary Applications
2. Normative references
The following referenced documents are indispensable for the application of this document (i.e., they mustbe understood and used, so each referenced document is cited in text and its relationship to this document isexplained).For dated references, only the edition cited applies. For undated references, the latest edition of thereferenced document (including any amendments or corrigenda) applies.
IEEE Std 1679TM-2010,IEEE Recommended Practice for the Characterization and Evaluation of EmergingEnergy Storage Technologies in StationaryApplications.2.3
3. Definitions, acronyms, and abbreviations3.1 Definitions
For the purposes of this document, the following terms and definitions apply.The IEEE Standards DictionaryOnline* and IEEE 1881 Standard Glossary of Stationary Battery Terminology[B7] should be consulted forterms not defined in this clause.
molten-salt battery: a class of batteries that use molten salts as an electrolyte.See also:Sodium-Beta cellSodium-Beta cell: a cell containing molten or semi-molten sodium and another material, which
act as the negative and positive electrodes respectively.
Sodium 3″-alumina:An impermeable white ceramic, consisting of 8″-alumina(8″-Al203)complexed with sodium ions, used in Sodium-Beta batteries as a separator and electrolyte.
sodium-nickel chloride: A Sodium-Beta cell using nickel chloride as the main material in thepositive electrode.
NOTE—Most designs also include iron chloride in the positive so they are technically sodium-nickel-iron chloride cells
sodium-metal chloride: A generic name for a family of sodium-based cells using one or more
chlorinated metal compounds as the positive electrode material.
sodium-metal halide cell: See: sodium-metal chloride.
sodium-sulfur cell: A Sodium-Beta cell using sulfur as the positive electrode material.
3.2 Acronyms and abbreviations
BMS
battery management system
GHS
Globally Harmonized System
NRTL
Nationally Recognized Testing Laboratory
PPE
personal protection equipment
Psoc
partial state of charge
sDs
safety data sheets
4. Document structure
Clause 5 through Clause 9 of this document follow the clauses of IEEE Std 1679-2010.Information specificto sodium batteries is included where appropriate. Additional subclauses have been added to this documentwhere further guidance is required.
5. Technology descriptions5.1 General
Refer to Clause 5 of IEEE Std 1679-2010.This clause describes the main sodium batteries that are either usedor are being considered for stationary battery applications.These include sodium-metal halide and sodium-sulfur. The information provided in this clause relates primarily to the energy storage system components ofthese technologies and does not address power conversion and grid interconnections.
5.2 Storage medium
5.2.1 General
In general,Sodium-Beta batteries utilize a hermetically sealed case to contain sodium and another material,which act as the positive and negative electrodes of an electrochemical energy storage system. These materialsmust operate at an elevated temperature as to be in a molten or semi-molten state (260 °C to 350 °C).A solidelectrolyte that is commonly made from a “-alumina ceramic provides the physical and electrical separationbetween the two molten materials.
During the charging process, an external voltage is imposed on the battery, which oxidizes the active materialin the positive electrode, liberating sodium ions. The sodium ions diffuse through the ceramic and are reducedto metallic sodium, resulting in a charged battery.When a load is connected between the electrodes, a flow ofthe electrons is then able to pass from the positive electrode to the negative electrode resulting in the reductionof sodium ions that diffuse back through the ceramic.This diffusion allows the component remaining on thepositive electrode to be oxidized.
5.2.2Sodium-metal halide
The term “sodium-metal halide” describes a class of electro-chemistries, of which sodium-nickel chloride isthe most common.Sodium-metal halide batteries consist of a nickel chloride and sodium-aluminum chlorideas the positive electrode, sodium as the negative electrode, and utilize a solid electrolyte of $”-alumina ceramicthat separates both electrodes. The chemistry of the sodium-nickel chloride battery becomes active when thetemperature reaches about 260 °C.The open-circuit voltage of sodium-nickel chloride cell chemistry is about2.5 v, while operating at an internal temperature in a range of approximately 250 °C to approximately 350 °℃.Depending on the application, a sodium-nickel chloride battery may discharge as low as about 1.7 V per cell.The nominal recharge voltage is about 2.7V per cell (see Figure 1).