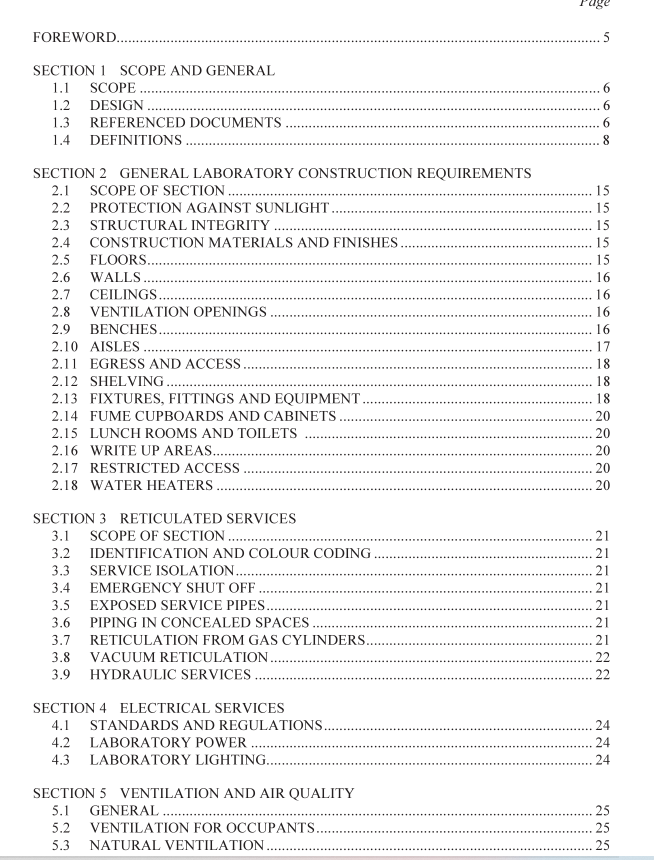 AS NZS 2982 pdf download – Laboratory design and construction
1.4.2 Approved, approval With the approval of, acceptable to, and meeting the prescribed standards of the authority having jurisdiction.
1.4.3 AQIS (Australian Quarantine and Inspection Service) Inspects and assesses imports for exotic pests and diseases, and provides certification for a range of exports.
1.4.4 Contaminated Containing harmful or hazardous concentrations of toxic, noxious, pathogenic, flammable, radioactive, explosive, oxidative, corrosive, irritating or other potentially injurious matter, including dusts.
1.4.5 Corrosive Having the quality of damaging or destroying by direct chemical action. This also includes the effect of caustic substances.
1.4.6 Cryogenic liquid Dangerous goods of Class 2, with a boiling point at atmospheric pressure of below minus 90°C, stored in liquid form at or near atmospheric pressure.
1.4.7 Dangerous goods (Australia) Substances and articles that—
(a) satisfy the UN tests and criteria for determining whether they are dangerous goods;
(b) are listed in the ADG Code; or
(c) are determined to be dangerous goods by the competent authority. (New Zealand) Substances and articles that have properties described in table A of NZS 5433, including packaging and empty containers that have not been cleared after containing dangerous goods. NOTES: 1 UN tests and criteria are specified in the UN Manual of Tests and Criteria and the UN Recommendations on the Transport of Dangerous Goods—Model Regulations. 2 Dangerous goods also include empty receptacles or packages that have contained dangerous goods, unless such receptacles or packages have been decontaminated.
1.4.8 Designated radiation area (DRA) An area where the occupational exposure of personnel to radiation or radioactive substances is under the supervision of a radiation protection adviser (RPA). NOTE: This includes the ‘controlled’ and ‘supervised’ areas referred to in publications of the International Commission on Radiological Protection, the International Atomic Energy Agency and the NHMRC.
1.4.9 Environmental Risk Management Authority (ERMA) The New Zealand Government statutory body responsible for regulating new organisms (including genetically modified organisms), under the Hazardous Substances and New Organisms (HSNO) Act 1996. The term includes ERMA New Zealand, the Agency that is the support organization for the Authority.
1.4.10 Flammable Capable of being readily ignited and burning.
1.4.11 Flammable liquid A liquid that is defined in the Australian Dangerous Goods Code (NZS 5433 for New Zealand) as a Class 3 liquid (also see AS 1940).
1.4.12 Flammable liquid storage cabinet A cabinet for the indoor storage of flammable liquids complying with Clause 7.2. The liquid capacity of these cabinets relates to flammable liquid contained in separate containers.
1.4.13 Flashpoint The temperature at which the liquid, when tested according to the method set out in AS/NZS 2106 or other equivalent specifications, evolves vapour in a sufficient quantity to be ignited by the test flame specified in the method.
1.4.14 Fume cabinet (also known as ‘recirculating fume cabinet’) A partially enclosed workstation that contains the fume to protect operators and other personnel, is ventilated by an induced flow through a working aperture and, by means of a filtration or absorption system, provides for the safe return of the exhaust air to the laboratory.
1.4.15 Fume (as used in the term ‘fume cupboard’ or ‘fume cabinet’) Airborne contaminants in the form of gases, vapours, aerosols or particulate matter.
1.4.16 Fume cupboard A partially enclosed workplace that—
(a) is designed to prevent the spread of fume to operators and other personnel in the laboratory;
(b) is ventilated by an induced flow of air through a sash opening or working aperture that may be adjusted;
(c) dilutes the fume; and
(d) by means of an exhaust system, provides for the safe and remote discharge of the fume outside the building.
NOTES: 1 A fume hood is a device mounted over a workplace to receive or capture fumes. It may provide little or no enclosure for the workplace and is therefore unable to attain containment as high as a fume cupboard. 2 In American usage, a ‘fume hood’ means a laboratory fume cupboard.
1.4.17 Gas container A closed cylinder or vessel used to contain a gas under pressure.
1.4.18 OGTR (Office of the Gene Technology Regulator) The Australian regulatory agency administering the Gene Technology Act 2000, which regulates genetically modified organisms in Australia.
1.4.19 Hazard A source or situation with a potential for harm in terms of human injury or ill health, damage to property, damage to the environment, or a combination of these (see AS/NZS 4801).