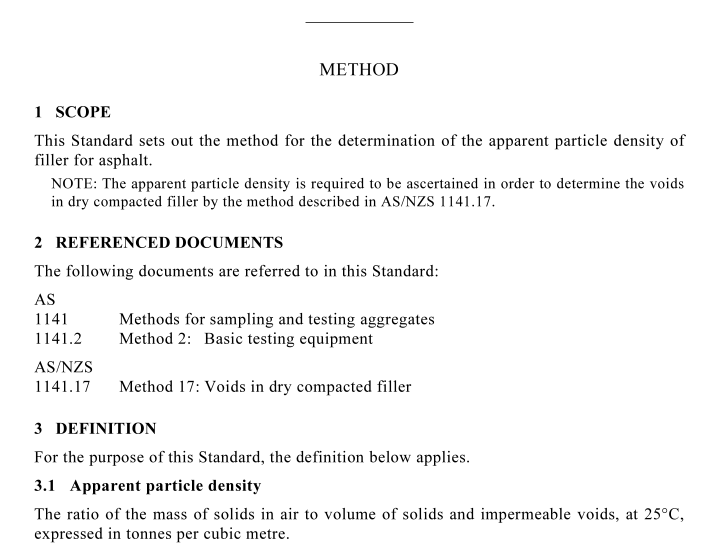 AS NZS 1141.7 pdf download – Methods for sampling and testing aggregates Method 7: Apparent particle density of filler
1 sCOPE
This Standard sets out the method for the determination of the apparent particle density offiller for asphalt.
NOTE: The apparent particle density is required to be ascertained in order to determine the voidsin dry compacted filler by the method described in AS/NZS 1141.17.
REFERENCED DOCUMENTS
The following documents are referred to in this Standard:AS
1141
Methods for sampling and testing aggregates
1141.2
Method 2: Basic testing equipment
AS/NZS
1141.17 Method 17: Voids in dry compacted filler
3 DEFINITION
For the purpose of this Standard, the definition below applies.
3.1 Apparent particle density
The ratio of the mass of solids in air to volume of solids and impermeable voids, at 25°C,expressed in tonnes per cubic metre.
4APPARATUS
The following apparatus, complying with the relevant provisions of AS 1141.2, is required:(a) Balance—of at least 100 g capacity，with a limit of performance not exceeding士0.005 g.
(b)Water bath—capable of maintaining a constant temperature of 25 土0.1°℃.
(c)Thermometer—a thermometer or other suitable temperature measuring devicereadable and accurate to 0.1°C.
(d)Glassware-consisting of the following:
(i)Density bottle，of 50 mL or 100 mL capacity and volume determined inaccordance with Appendix A.
(ii)Small funnel.
(e)Oven——drying oven with operating temperature 105C to 11o°℃.(f)Desiccator—containing anhydrous silica gel.
(g)Vacuum vessel—capable of holding the density bottle and of withstanding the appliedvacuum.
(h)Vacuum device—capable of reducing and maintaining the residual pressure in the vacuum vessel to below -90 kPa gauge pressure
5 DILATOMETRIC LIQUID
The dilatometric liquid shall be either of the following, as appropriate:
(a)Kerosene.
(b)Distilled or deionized water,when the filler is known not to react with water.
6 PROCEDURE
The test procedure shall be carried out on duplicate test portions as follows:
(a)Using the procedure prescribed in Appendix A，Steps (a) to (g),weigh the densitybottle and stopper when filled with the dilatometric liquid and record the mass (mz).(b)Dry the test portion of filler for 4 h in the oven at a temperature of 105°C to 110C
and cool in the desiccator to room temperature.
(c)Clean and dry the bottle and add the filler through the funnel until the bottle is approximately one-third full. Weigh the bottle plus contents and stopper and recordthe mass (ma)
(d)Add sufficient dilatometric liquid to cover the filler and half fill the bottle. Release entrapped air by giving the bottle and its contents a few light taps or gentle swirls onthe bench and then subjecting the bottle and contents to reduced pressure(approximately -90 kPa gauge pressure) in a vacuum vessel for at least 5 min until nofurther bubbles appear.
(e)Add further dilatometric liquid to fill the bottle completely then immerse the bottle in the water bath at 25 土0.1°C.The level of water in the bath shall come to withinapproximately 5 mm of the top of the density bottle.
(f)After 30 min,insert the stopper carefully so that no bubbles are trapped in the neck of
the bottle and the excess liquid is expelled through the capillary in the stopper.
(g) After a further 10 min, brush the top of the stopper with a slip of filter paper, holding the paper at an angle to ensure a flat surface is passed over the capillary opening. Do not hold the bottle by hand during this process.
(h) Remove the bottle from the bath, dry carefully, preventing any static charge and weigh immediately, recording the mass of stopper, density bottle, filler and dilatometric liquid (m 5 )
NOTE: On removing from the water bath the bottle should be handled gently by the neck to prevent distortion of the bottle sides using suitable tongs or gloves to prevent transfer of heat, static or contamination of the bottle.
7 CALCULATION
7.1 Calculate as follows:
a) Apparent particle density, ρ, shall be calculated using the following equations: