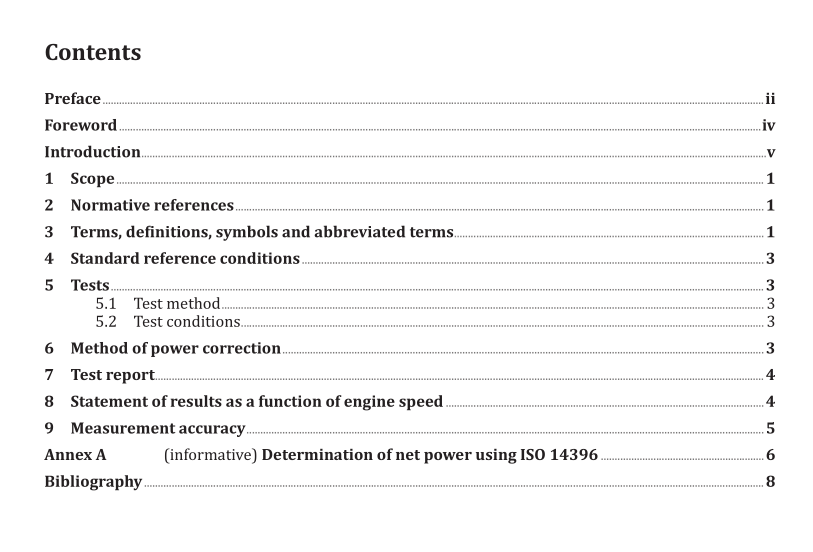 AS ISO 9249 pdf download – Earth-moving machinery — Engine test code — Net power
1 Scope
This International Standard specifies a method for testing the net power of internal combustion enginesintended for the propulsion of earth-moving machinery as defined in ISO 6165.lt is intended to providea standardized means of reporting net power values to the end user of the earth-moving machines.lt isapplicable to
a) RIC spark- or compression-ignition engines but excluding free piston engines,b) rotary piston engines.
These engines may be naturally aspirated or pressure-charged using either a mechanical pressure-charger or a turbocharger.
NOTE This International Standard is a companion standard to lS0 14396.The principle differences betweenthe two is the fitting of certain cooling equipment and pressure-charging equipment auxiliaries (fans) for thetest. It is possible to deduct the power requirements of equipment and auxiliaries from the engine ratings ofIS0 14396 by test or calculation methods. See AnnexA for the preferred calculation method for obtaining the netpower ratings according to this International Standard.Both the test and the calculation method comply withthis lnternational Standard.
2Normative references
The following referenced documents are indispensable for the application of this document. For datedreferences,only the edition cited applies.For undated references, the latest edition of the referenceddocument (including any amendments) applies.
ISO 6165,Earth-moving machinery —Basic types — ldentification and terms and definitions
IS0 14396,Reciprocating internal combustion engines —Determination and method for the measurementof engine power —Additional requirements for exhaust emission tests in accordance with ISo 8178
ISO 15550:2002,Internal combustion engines —Determination and method for the measurement of enginepower – General requirements
3Terms, definitions, symbols and abbreviated terms
For the purposes of this document, the symbols and abbreviated terms given in IS0 15550 and thefollowing terms and definitions apply.
3.1
declared engine speed
engine speed corresponding to the declared power
Note 1 to entry: In some applications, the declared engine speed is named “rated speed”.[SOURCE:ISO 15550:2002, definition 3.2.4]
3.2
declared power
value of the power, declared by the manufacturer, which an engine will deliver under a given set ofcircumstances
Note 1 to entry: In some applications, the declared power is named “rated power”.[SOURCE:ISO 15550:2002, definition 3.3.1]
3.3
engine adjustment
physical procedure of modifying an engine for the purpose of adapting it to deliver a power adjustedto a different set of ambient conditions,such as by moving the limiting fuel stop, re-matching theturbocharger, changing the fuel injection timing or other physical changes
Note 1 to entry: Once the modifications have been completed the engine is an adjusted engine.[SOURCE: ISO 15550:2002, definition 3.2.1]
3.4
engine speed
number of revolutions of the crankshaft in a given period of time[SOURCE: ISO 2710-1:2000, definition 11.1]
3.5
fuel delivery
metered volume (mass) of fuel delivered by a fuel injection system during one working cycleNote 1 to entry: Adapted from ls0 7876-1:1990, definition 10.24.
3.6
load
general term describing the magnitude of the “power”or “torque” demanded from the engine by itsdriven machinery and usually expressed relative to a declared power or torque
Note 1 to entry: T’he term “load” is physically imprecise and should be avoided.For quantitative purposes theterms “power”or “torque” should be used, instead of”load”, together with a statement of speed.
[SOURCE: ISO 15550:2002, definition 3.3.11]
3.7
net power
power obtained on a test bed at the end of the crankshaft or its equivalent, at the corresponding enginespeed, with the equipment and auxiliaries listed in IS0 15550:2002, Table 1, column 2,and required incolumn 3 (fitted for engine net power test)
Note 1 to entry: If the power measurement can only be carried out with a mounted gearbox, the losses in thegearbox should be added to the measured power to give the net engine power.
Note 2 to entry: Adapted from ISo 15550:2002, definition 3.3.3.1.
3.8
net torque
torque transmitted on a test bed at the end of the crankshaft or its equivalent, at the correspondingengine speed, with the equipment and auxiliaries listed in IlSO 15550:2002,Table 1, column 2, andrequired in column 3 (fitted for engine net power test)
Note 1 to entry: Adapted from ISo 15550:2002, definition 3.3.12.3.9
power correction
calculation procedure by which a power value determined under engine test conditions is modified sothat it represents the power value expected under other operating or reference conditions without anyengine adjustment
[SOURCE: ISO 15550:2002, definition 3.3.101
4  Standard reference conditions
The standard reference conditions shall be in accordance with ISO 15550:2002, Clause 5.
5  Tests
5.1  Test method
The test method shall be test method 2 as specified in ISO 15550:2002, 6.3.
5.2  Test conditions
The test conditions shall be in accordance with ISO 15550:2002, 6.3.4, together with the following:

AS ISO 9248 pdf download - Earth-moving machinery — Units for dimensions, performance and capacities, and their measurement accuracies