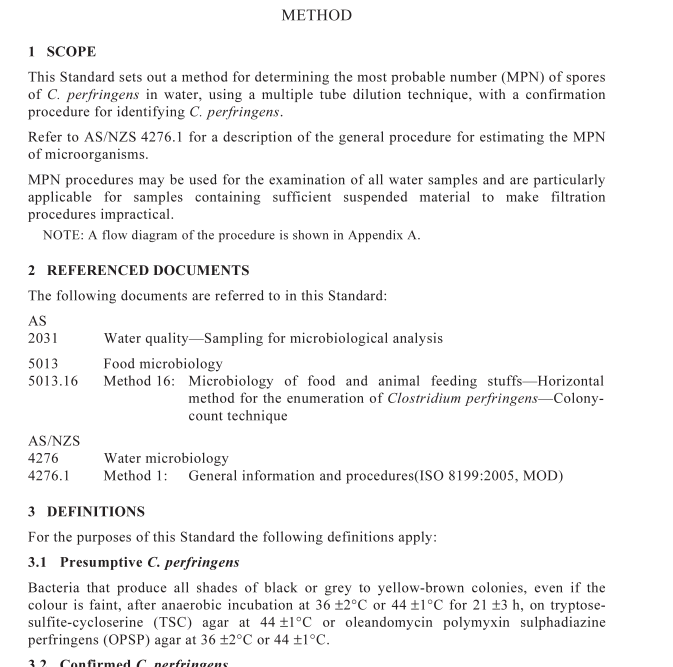 AS 4276.17.2 pdf download – Water microbiology Method 17.2: Spores of Clostridium perfringens—Estimation of most probable number (MPN) using the multiple tube dilution technique
6.2 Pipettes or equivalent measuring devicesl mL,10 mL,50 mL
6.3Anaerobic incubatorsljar
With appropriate equipment and materials to generate an atmosphere of approximately 90%hydrogen and 10%carbon dioxide.
6.4Incubators or wafer bath
Able to maintain at 36 土2°C,44 土1C and 60 12°℃.7 SAMPLES
Sample holding and storage times shall be in accordance with AS 2031.8 TEST PROCEDURES
The procedure shall be as follows:
(a)Heat the sample to 60±2°C in a waterbath and maintain this temperature for
l5 ±l min. The volume heated should be greater than the volume to be analysed. Thetemperature should be monitored by placing an appropriate thermometer in areference bottle of the same size as the sample bottle and containing the same volumeof water at the same initial temperature as the sample being treated. The time taken toreach 60 +2°C shall not exceed 15 min and can be minimized by ensuring the water inthe water bath is circulated to maximize heat exchange.
(b)Using DRCM heated by bringing to the boil or steaming for 5 minutes to drive off
oxygen and cooled immediately before use，prepare and inoculate bottles withappropriate volumes dilutions of the heated sample, as described for the MPN methodin AS/NZS 4276.1.Top-up with single strength medium so as to leave a minimalamount of air space.
(c)Incubate the bottles at 44±1°C for 48 土4 h. A positive reaction is shown by
blackening of the medium.
NOTE: Large volumes of culture in sealed bottles may explode.Bottles may be sealed in plasticbags in order to contain any breakage or spillage during incubation. Alternatively, the bottles maybe incubated anacrobically with the caps loosened and with sufficient hcadspace to avoidcxplosions.
9 CONFIRMATION OF C.PERFRINGENS
9.1 Waters with low levels of competing spore forming bacteria
The procedure shall be as follows: Streak a loopful of broth from blackened DRCM tubesonto TSC agar plates to obtain single colonies and incubate anaerobically at 44±1 C for21 士3 h.
9.2Waters with high levels of competing spore forming bacteria
The procedure shall be as follows: Streak a loopful of broth from blackened DRCM tubesonto OPSP agar plates to obtain single colonies and incubate anaerobically at 36 土2°C for21 士3 h.
When interpretation of results becomes problematic due to interference from spreadingmicro-organisms or unacceptable confirmation rates (presumptive C. perfringens coloniesnot confirming), or when samples have a history of problematic results, OPSP agar may beincubated at 44 士1C.
NOTE:Increasing the selectivity of a procedure may not recover some strains of the targetmicroorganism.
(a)C. perfringens produces black or grey to yellow-brown colonies on TSC and OPSP
agar. Since the black colour of the colonies rapidly fades and finally disappears underaerobic conditions, the plates have to be counted within 30 min after completion ofthe anaerobic incubation. If a number of anaerobic jars are used, the plates should bechecked jar by jar or in portions if the incubation was performed in an anaerobicincubator.
(b)The target colonies are subcultured onto Columbia blood agar or a suitable nutrient-
rich agar with or without blood (e.g.Columbia agar base,tryptone soya agar).Forwaters with high background counts or where other sulfite reducing bacteria maymake it difficult to isolate C. perfringens (e.g. spreading colonies),the use ofColumbia blood agar (or a suitable nutrient rich agar containing blood) withneomycin (0.01%) may be beneficial.
(c)Incubate anaerobically at 44 ±1 C for 21 ±3 h.
NOTE: Non-selective media are preferred when undertaking confirmation testing.Generally,there are some strains of a target microorganism that are inhibited by a given selective agent.
9.4 Biochemical confirmation
9.4.1 Acid phosphatase test
The procedure shall be as follows: Pre-warm acid phosphatase reagent to approximately36°C for 30-60 minutes prior to use.Add 2 to 3 drops of the acid phosphatase reagent ontofilter paper and spread colonies，grown anaerobically on Columbia blood or a suitablenutrient rich agar plate，onto the phosphate reagent soaked paper. A purplish colourdeveloping within 3 to 4 min is considered as a positive reaction.
9.4.2 Alternative biochemical tests
Confirmation may be performed in accordance with AS 5013.16.9.5 Confirmed C. perfringens
C. perfringens produces growth and blackening in DRCM at 44 ±1C,produces black orgrey to yellow-brown colonies on TSC or OPSP agar，even if the colour is faint，andpossesses acid phosphatase or produces reactions as described in AS 5013.16.
10 CALCULATIONS
Calculation of results shall be carried out as described in AS/NZS 4276.1.