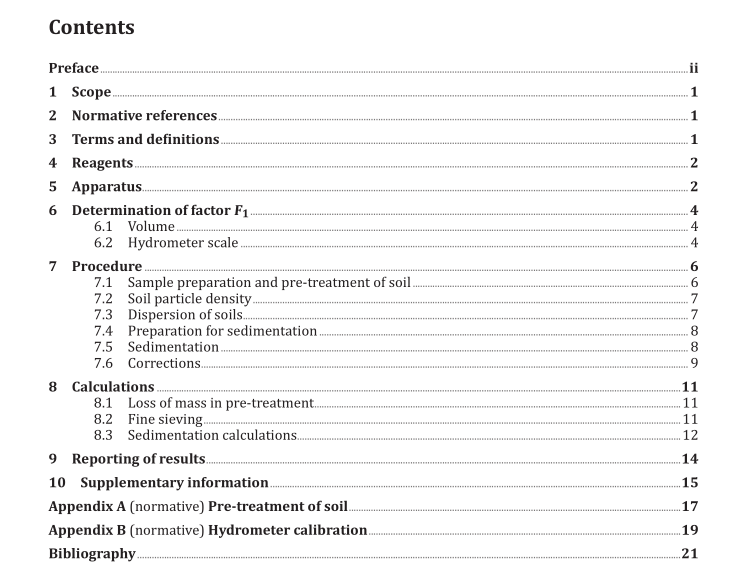 AS 1289.3.6.3 pdf download – Methods of testing soils for engineering purposes Part 3.6.3: Soil classifcation tests — Determination of the particle size distribution of a soil — Standard method of fne analysis using a hydrometer
7.4  Preparation for sedimentation The procedure shall be as follows: (a) Transfer the liquid to the stirring device cup and operate for 15 min. If the volume of liquid exceeds the capacity of the cup, this process will need to be completed in multiple steps as follows: (i) Transfer the mixture to the high-speed mechanical stirrer or to the air-jet dispersion cup, using a jet of distilled water.
(ii) Transfer the suspension that has passed through the sieve to the 1 L measuring cylinder and make up to exactly 1 L with distilled water. This makes the suspension to be used in the sedimentation analysis.
(b) For soils likely to suffer severe structural breakdown, it is recommended that the air dispersion device be used, and mechanical dispersion not be used before washing over the 75 μm sieve.
(c) In the case of (a) or (b) operate the dispersion device for 15 min. When using the mechanical stirrer use the baffle in the mechanical stirrer container. When using the air-jet dispersion device, operate it at a gauge pressure of 140 kPa ± 10 kPa. 7.5  Sedimentation The procedure shall be as follows:
(a) Place the 1 L cylinder containing the suspension in the constant temperature room, or bath and preferably leave it to stand until it has attained the ambient temperature of 20 °C ± 1 °C. Close the mouth of the cylinder with the palm of the hand, or with a suitable watertight stopper or lid, and turn the cylinder end over end thoroughly for about 60 rotations in 1 min.
(b) Immediately after shaking, place the cylinder on a firm, level and vibration-free place in the constant temperature room or bath. Then proceed as follows: (i) Start the stop-clock and record the time of commencement of the test.
(ii) Immediately immerse the hydrometer to a depth slightly below its floating position and allow it to float freely. (iii) Take readings at the top of the meniscus at 0.5-, 1-, 2-, and 4-min intervals and record readings to the nearest gram per litre (or 0.0005 g/mL) (R h ).
(iv) Remove the hydrometer slowly, rinse it in distilled water, and place it in another cylinder of distilled water, which is at the same temperature as that of the suspension.
(v) Re-insert the hydrometer in the suspension and take readings at elapsed times of 8, 15 and 30 min and 1, 2, 4 and 8 hrs.
(vi) Remove the hydrometer after each reading, rinse it, and replace it in the cylinder of distilled water. (vii) After the 4 h reading take further readings once or twice daily up to 48 h after dispersion, recording the times of reading. (Always insert and withdraw the hydrometer carefully when taking a reading to avoid undue disturbance of the suspension, allowing 10 s for each operation. Avoid vibration of the sample from any source.)
(c) Record the temperature of the suspension once during the first 15 min of sedimentation and then after every subsequent reading. Record the temperature, accurate to within ±0.5 °C (see Clause 10 Note 7).
d) At the conclusion of the sedimentation test —
(i) transfer the contents of the cylinder after decantation to an evaporating dish (mass determined to within 0.01 g);
(ii) dry in the oven at 105 °C to 110 °C;
(iii) cool in the desiccator and determine the mass of the contents to the nearest 0.01 g; and (iv) record the mass as the mass of the fraction passing the 75 μm sieve (m 6u )
uncorrected for dispersing agent.
(e) For soils which do not require pre-treatment, or where the mass of material in suspension at the commencement of the hydrometer analysis has been found in the course of its preparation during fine sieve analysis (refer to AS 1289.3.6.1), omit the drying of the material after hydrometer analysis. For soils which did require pre-treatment, obtain the mass of the fraction passing the 75 μm sieve (m 6 ) from the difference between the calculated oven-dry mass (m 4 ) of the subsample obtained in Clause 7.1(a) and the oven-dry mass (m 5 ) of the fraction of the sample retained on the 75 μm sieve.

AS 1271 pdf download - Safety valves, other valves, liquid level gauges and other fittings for boilers and unfired pressure vessels

AS 1289.4.4.1 pdf download - Methods of testing soils for engineering purposes Method 4.4.1 : Soil chemical tests— Determination of the electrical resistivity of a soil—Method for sands and granular materials