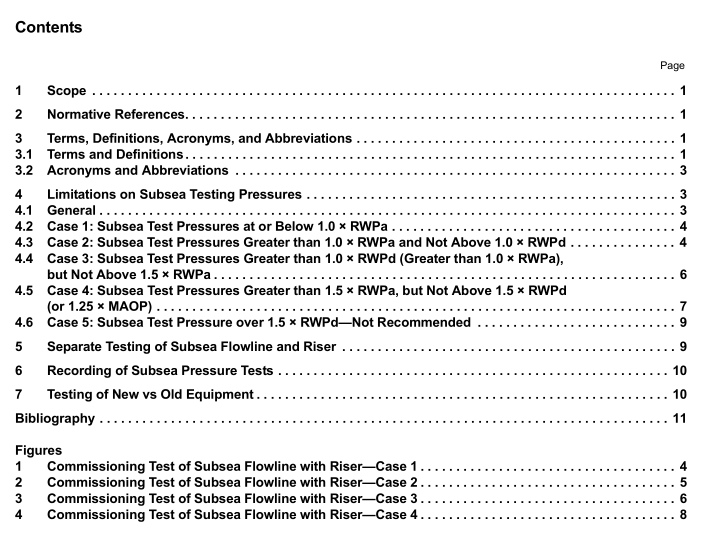 API TR 17TR11 pdf download Pressure Effects on Subsea Hardware During Flowline Pressure Testing in Deep Water
CAUTIONS
1) Some elements within subsea hardware components may have empty spaces or trapped voids between sealsthat contain air or other fluid at 1-atmosphere pressure, with seals that prevent the ambient seawater pressurefrom reaching the backside of the primary seal or barrier. The differential pressure acting on these elements isactually equal to the absolute pressure inside the hardware component during subsea testing, since the ambientseawater pressure is not present behind the primary seal.Some examples are:
a) space between dual stem packings or other dual seal sets,
b) space between a stem packing and an external seawater barrier seal,c) space behind the diaphragm within a pressure sensor,
d) space between dual seals in electrical penetrators.
Such elements with 1-atmosphere trapped void spaces may be damaged or may lose calibration, if absolutepressures go above 1.0 x RWPA during subsea hydrotesting operations. The ownerloperator should confirm withthe subsea hardware supplier the maximum absolute pressure these components can tolerate without damage orloss of calibration.
The purchasing specifications for these components should require the manufacturer to design, test, and qualifythem for the maximum anticipated absolute pressures to be used during subsea testing operations. In somecases, it may be preferable to upgrade to higher rated components that can withstand the hydrotest pressures(e.g. using 15 ksi rated pressure sensors in a 10K MAOP flowline system that must be hydrotested to 12.5 ksi).
2) Where subsea tests are conducted against pressure caps with small bleed/ltest valves (usually needle valves) in
the cap, these valves are normally closed during subsea testing of the flowline.Such valves are not designed orintended to be used at differential pressures above their APl RWP when closed(differential across the closedvalve gate/needle and seat). In this regard, the RWP of these valves must be based on the maximum anticipatedsubsea test pressure, which is often higher than the design pressure of the flowline system.
API 6A and API 17D typically do not address how the owner/operator should use the equipment in the field, nor do the API specifications set any limitations on subsea test pressures or test durations that the owner/operator may apply to the equipment in the field. Manufacturers may assist the owner/operator in evaluating the anticipated subsea test pressures compared to the RWP of the hardware components, but the ultimate decision on component RWP selection is the responsibility of the owner/operator. Subsea hardware manufacturers typically prefer some margin between the FAT test pressure and the subsea test pressure (e.g. they may recommend that the maximum absolute pressure for subsea testing be no more than 90 % of the absolute pressure actually used during shop FAT testing), but no industry wide consensus has been established.
4.4 Case 3: Subsea Test Pressures Greater than 1.0 × RWPd (Greater than 1.0 × RWPa), but Not Above 1.5 × RWPa All comments for Cases 1 and 2 above apply regarding component limitations that affect maximum allowable subsea test pressure. In this example, the subsea hydrotest differential pressure is well above 1.0 × RWPd, but the subsea differential pressure does not exceed the differential pressure actually used during shop FAT testing (typically 1.5 × RWPd) or fabrication yard testing (typically 1.25 × MAOP, which could be less than 1.5 × RWPd) (see Figure 3).
Exposing components to differential pressures greater than those used during FAT/fabrication yard testing could open up new leaks subsea. Owner/operators should confirm with the hardware component manufacturer the maximum allowable subsea test pressure if subsea hydrotest differential pressure is to exceed 1.0 × RWPd of those items at any time. Owners/operators should also check with the manufacturer/fabricator of the assembled equipment to ensure that the applied pressure during flowline testing will not exceed the capacity of any associated pipework, which may not be designed to a code that requires pressure testing to 1.5 × RWPa. Manufacturers may need to modify their standard shop FAT and/or fabrication yard test pressures to ensure they are equal to or higher than the planned subsea hydrotest pressures.