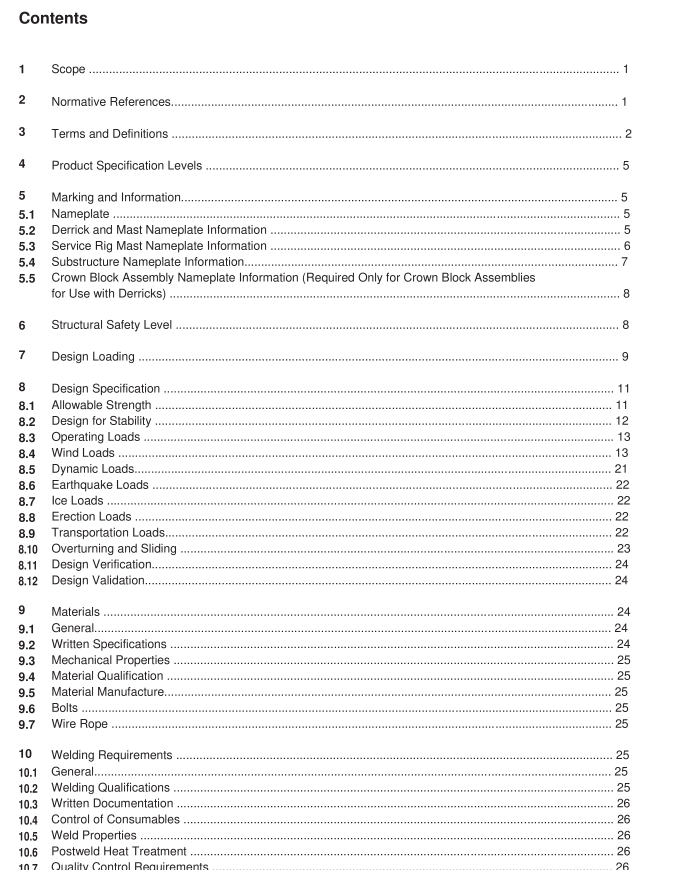 API SPEC 4F pdf download Specification for Drilling and Well Servicing Structures
8 Design Specification Specification for Drilling and Well Servicing Structures 1 1
8.1 Allowable Strength
8.1.1 General The steel structures shall be designed in accordance with the Allowable Strength Design code in ANSI/AISC 360-1 6, except as further specified in this standard. ANSI/AISC 360-1 6 shall be used in determining allowable member strength. Use of load factor and resistance design (LFRD) is not allowed. ANSI/AISC 360-1 6 shall be used for determination of allowable member strength except that current practice and experience do not dictate the need to follow ANSI/AISC 360-1 6 for “members and their connections subject to fatigue loading” (Section B3.1 1 ) unless specified by the purchaser and for the consideration of secondary loads. NOTE Derricks, masts, and substructures for drilling rigs fall outside the defined scope of the ANSI/AISC 360-1 6 specification.
AISC recognizes this and recommends that the use of the AISC specification outside of the defined scope be used with engineering judgement as it relates to the specific industry. For the purposes of this standard, axial loads (tension or compression) are defined as primary loads in individual members of a latticed or trussed structure. Moments in the individual members of a latticed or trussed structure resulting from elastic deformations and rigidity of joints are defined as secondary loads.
These secondary loads may be taken to be the differences between loads from an analysis assuming fully rigid joints, with loads applied only at the joints, and those loads from a similar analysis with pinned joints. Loads arising from eccentric joint connection, or from transverse loading of members between joints, or from applied moments shall be considered primary loads. When axial loads are the intended primary loads, allowable member strength may be increased by 1 0 %. This shall apply to members that have a plastic section modulus/elastic section modulus (Z/S) ratio of 1 .2 or less when secondary loads are computed and added to the primary loads in individual members, for all loadings except earthquake. The 1 0 % increase in allowable member strength shall not be used when the Z/S ratio exceeds 1 .2.
The Z/S ratio is taken about either the major or minor member axis for the direction of the applied moment. Required strength due to primary loads shall not exceed the maximum allowable member strength. The increase in allowable member strength when secondary loads are considered may be taken in addition to the increases allowed in 8.1 .2.
The allowable member strength is defined in ANSI/AISC 360–1 6 as the nominal strength (R n ) of the member divided by a safety factor (Ω). Allowable Strength= R n  / Ω. ANSI/AISC 360-1 6, Chapters D through K give further definition of the nominal strength and safety factor for the applicable limit states. Earthquake loading and the related allowable strength are addressed specifically in 8.6.
Ice Loading and related allowable strength are addressed specifically in 8.7. 8.1.2 Wind and Dynamic Allowable Strength Increases For operating and erection conditions, allowable member strength shall not be increased (strength modifier = 1 .0) over the basic allowable member strength defined in 8.1 .1 . For transportation conditions, allowable member strength may be increased one-third (strength modifier = 1 .33) over the basic allowable member strength defined in 8.1 .1 .
For the unexpected and expected design storm conditions, allowable member strength may be increased one- third (strength modifier = 1 .33) over basic allowable member strength defined in 8.1 .1 .
For purposes of defining the nameplate graph of allowable static hook load vs wind velocity required by 5.2 n) or 5.3 o), a linear transition from a strength modifier of 1 .0 for operating cases to 1 .33 for the unexpected storm case may be used.
8.1.3 Wire Rope
The size and type of wire shall be as specified in API 9A and by API 9B.
A drilling structure raised and lowered by means of a wire rope assembly shall have the wire rope assembly designed to have a nominal strength of at least 2.5 times the maximum design load on the assembly during erection.
Guy lines shall be designed to have a nominal wire rope assembly strength of at least 2.5 times the maximum guy load resulting from a loading condition.
The strength of a wire rope assembly shall be derated for end connection efficiencies and for D / d ratios less than 1 8 in accordance with API 9B.
8.1.4 Crown Shafting
Crown shafts, including fastline and deadline sheave support shafts, shall be designed using an allowable stress method with a maximum allowed bending moment as in Equation (1 ).