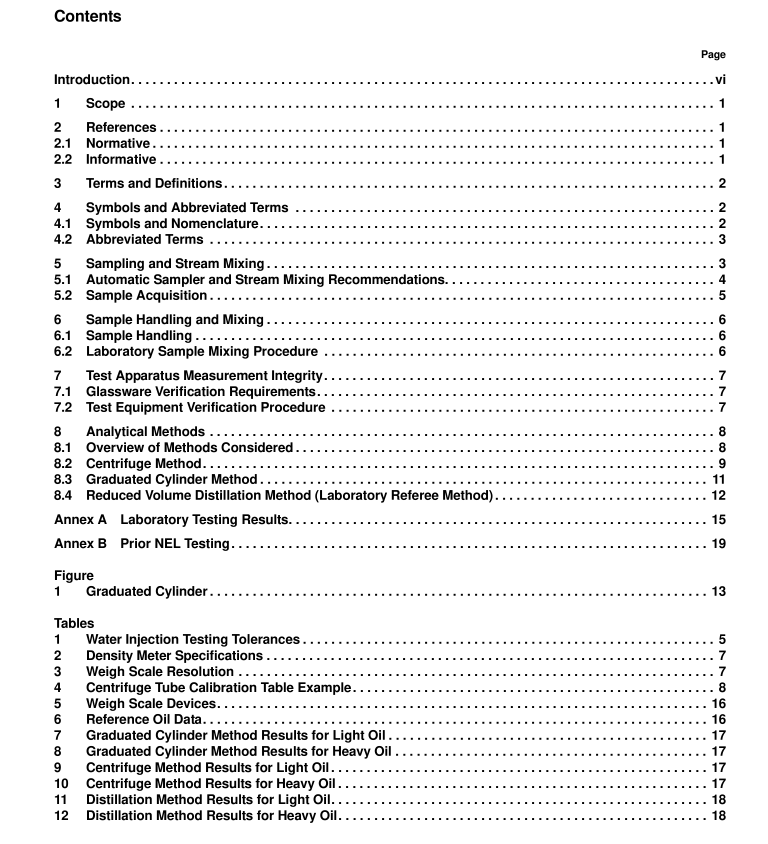 API RP 87 pdf download Recommended Practice for Field Analysis of Crude Oil Samples Containing from Two to Fifty Percent Water by Volume
5.1 Automatic Sampler and Stream Mixing Recommendations Since no specific testing has been conducted for this recommended practice, a conservative installation design approach should be taken. Furthermore, lighter crude oil or condensate presents the greatest difficulty in acquiring representative samples. This is due to phase separation which depends on the density difference between water and crude oil and a relatively lower emulsion viscosity. Higher viscosity emulsions tend to suspend water better than lower viscosity emulsions. Therefore, light crude oil applications should be considered to be more difficult than heavier, more viscous crude oils. Following are the recommendations for stream mixing and automatic sampling systems:
1 ) The design of the automatic sampling system, inclusive of the probe, extraction tubing, receiver, and sampler circulating/mixing system should be in accordance with API MPMS Chapter 8.2. Additionally, in-line mixer systems should be employed on all high water content situations regardless of the stream velocity. API MPMS Chapter 8.2 provides that in-line mixers are not needed if the velocities are sufficiently high. However, this only applies to low water content situations.
2) The recommended installation includes a properly designed static mixer or a jet mixer. The orientation should be in a vertical down flow pipe. The sample probe (for automatic or spot samples) should be within two to three pipe diameters from the exit of the mixer.
3) If vertical down flow is not a viable option, a vertical up flow orientation is also adequate provided a mixer is installed upstream and that the stream velocity is sufficient so that water droplets will not ‘back flow’.
4) If a vertical orientation is not possible the sample probe may be installed in horizontal pipe, provided a mixing device is installed upstream. The sample probe should be located immediately downstream of the mixer since higher water content streams tend to separate into a layered oil/water flow very quickly.
5) All in-line mixing will likely cause gas break-out in non-stabilized crude oil streams. Therefore all mixing and sampling devices must be located downstream of any associated metering equipment.
5.1.1 Water Injection Tests Regardless of the installation, it is recommended that a water injection verification test be conducted in accordance with API MPMS Chapter 8.2. Furthermore, it is recommended that the entire sampler system (in-line mixer, sample probe, receiver plus mixing system) be included in the testing. The optimal time (possibly the only time) to conduct this type of test is early in the life of the field before the wells begin to produce significant fractions of water at the sampling point. Thus, the baseline stream water content will (hopefully) be low (e.g. less than 5 %), which will enhance the accuracy of the test. Sea water or production water may be used since the densities are similar. The water injection point should be sufficiently far enough up stream of the mixer and sample probe in order to minimize any test-induced effect on the flow pattern. Since the water fraction is relatively large, both the water and oil meter should have an accuracy of ± 1 % or better. Automatic sampler container and circulating/mixing systems should also be tested in accordance with API MPMS Chapter 8.2.
The container/spray bar/mixing system test may be conducted as part of the water injection test or it may be tested separately. If testing the container/mixer system separately, a sample of ‘dry’ oil should be obtained from the sales point, a baseline water content of the sales oil established by analysis and then mixed with incremental amounts of water with tests covering the normal expected range of water content. This test will not only confirm the mixing capability of the system but also provide guidelines for mixing times under normal use. The acceptance tolerances for water injection testing per API MPMS Chapter 8.2 were developed for low water content streams. Thus, for high water content streams, these acceptance tolerances should be increased accordingly and should be a function of the uncertainty of the metering equipment and the analysis. As a guide, the acceptance tolerances should be ± 5 % [rel.] of the actual test point. Following is an example of the recommended tolerances: