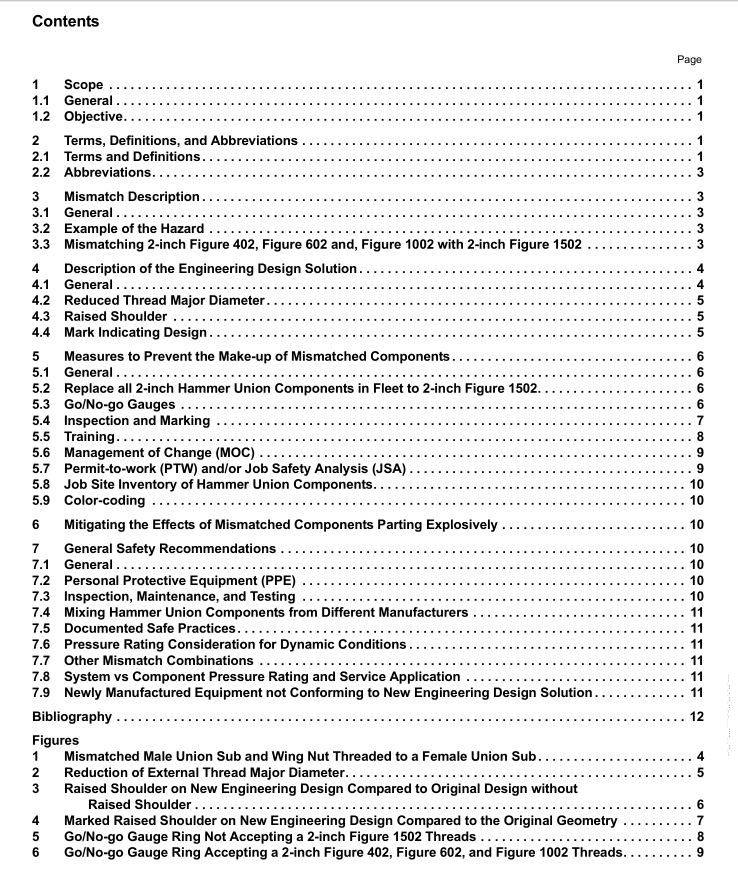 API RP 7HU1 pdf download Safe Use of 2-inch Hammer Unions for Oilfield Applications
Users should consider implementing an incentive program that rewards employees that identify and remove components that should not be in their fleet (e.g. 2-inch Figure 402, Figure 602 and Figure 1002 components in the fleet of a company whose policies dictate the use of only 2-inch Figure 1502).
5.6 Management of Change (MOC) An MOC process should be utilized, including gauging and/or confirmation of markings correct for the service, if a hammer union component needs to be changed out in a system. This is to ensure the replacement does not result in a mismatch. When equipment (such as a manifold) that has been pre-manufactured (or pre-assembled) is in need of repair or replacement, the manufacturer/assembler’s hammer union component specifications should be consulted to ensure correct unions are utilized for the repair/replacement. Users should maintain documentation of all hammer union components utilized in their permanent and temporary piping systems. This information should be reviewed and updated when repairing or replacing equipment.
5.7 Permit-to-work (PTW) and/or Job Safety Analysis (JSA) A PTW and/or JSA process should be utilized for all jobs involving hammer union components. The PTW/JSA should include a walk-the-lines inspection before pressure testing prior to commencement of operations. This walk-the-lines inspection is especially important when temporary hammer union components from a contractor are being connected to installed hammer union components from another company. Inspection of all equipment interfaces (with different owners) should be conducted.
5.8Job Site Inventory of Hammer Union Components
Users should maintain an inventory of hammer union components by job site and implement a system by which toidentifylinspect any additional equipment with hammer union components that arrives on the job site. This inventorycontrol process at the job site should help ensure no mismatches,which is especially important when temporaryhammer union components in use by one company are being connected to installed hammer union components inuse by another company.
5.9Color-coding
Hammer union components should be color-coded by the user to indicate the union figure number or workingpressure of the equipment. Users who opt to have such a color code should publish the code and make it available toall staff, suppliers, and customers.An example of a color-coding system can be found in Enform lRP4
NOTE Color-coding should not be relied upon as the primary design identifier as it is not permanent (due to environmentalexposure in field) and can easily be impacted by human error or conllict with other color-coding used in the field.
6Mitigating the Effects of Mismatched Components Parting Explosively
The following mitigation measures should be considered and applied to protect people in the case of a mismatchedhammer union or other component failure.Most,if not all, of these measures should be applied to every job utilizinghammer union components.
a) Use barriers and/or restricted access of personnel for all pressurized operations. Place staff where they are minimally exposed.
b)Orient outlet and instrumentation fittings at 90° or 180° to an employee’s expected body placement when it is necessary for an employee to be near pressurized equipment (e.g. to operate valves or read gauges).
c) Locate the temporary pipe connections where there is less exposure to personnel (e.g. under the rig floor).
d) Use a system of restraint for pipework that has been proven in pressurized operations.Examples indlude fiberrope restraints and safety clamps with wire rope. Personnel should be trained in the proper installation of thesafety restraint system.
7 General Safety Recommendations7.1General
The general safety recommendations for working with temporary piping, hammer unions, and/or union componentsdescribed in 7.2 through 7.9 should be considered to help protect people and property. This list is not meant to be all-inclusive.
7.2Personal Protective Equipment (PPE)
Proper PPE should be used during make-up and breakout of hammer union components.A hazard assessmentshould be performed to determine the proper PPE based on the specific equipment and tools being used.
7.3Inspection,Maintenance, and Testing
Hammer union components should be inspected, maintained, tested, and removed from service (due to corrosion,erosion, damage, and deformation of wing nut ears) based on manufacturer’s recommendations and experlence by